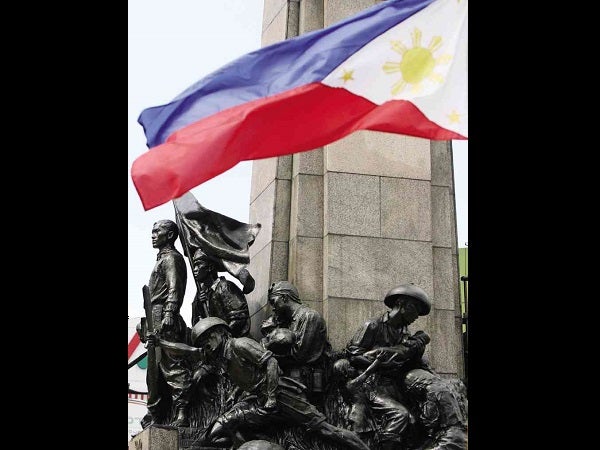 BONIFACIO AT 150 The Philippine flag flutters in the wind at the monument of Andres Bonifacio in Caloocan City as the nation celebrates the 150th birth anniversary Friday of the Father of the Philippine Revolution. A proposal has gone up in Congress that would designate the leader of the Katipunan as national hero in place of Jose Rizal. MARIANNE BERMUDEZ

To this day, Filipinos debate who between Jose Rizal and Andres Bonifacio, who died opposing Spanish rule and only months apart, deserves to be revered as national hero.

Three members of the House of Representatives hope to put an end to the debate by introducing legislation that would take away the accolade from the ilustrado from Calamba, Laguna province, and hand it to the poor boy from Tondo, Manila.

The attempt at a congressional act to settle the debate comes as the nation commemorates Bonifacio’s 150th birth anniversary.

“There has never been legislation declaring a national hero. Instead there was only a number of proclamations that gave recognition and honor to a few historical figures for their contribution to society, the most famous of whom are Jose Rizal and Andres Bonifacio,” Colmenares and Zarate said in their explanatory note.

After learning from research done by his staff that the Philippines has no official national hero, Rep. Edgar Erice reckoned it was an opportune time to give Bonifacio the honor that he had been deprived of for more than 100 years.

“It’s about time we named Bonifacio the national hero,” Erice said in an interview.

“If Rizal’s monument at Luneta Park has a full-time guard, it is but fair that the Bonifacio monument should be given the same reverence,” he said.

Colmenares and Zarate pointed out that it was Gen. Emilio Aguinaldo who issued in 1898 the decree designating Dec. 30, the day of Rizal’s execution at Bagumbayan, Manila, as Rizal Day.

They also said it was the American-led Taft Commission that named a Philippine province after Rizal.

Colmenares and Zarate said Congress in 1918 approved the erection of the Bonifacio monument and in 1921 declared Nov. 30 Bonifacio Day.

Twenty years ago, Colmenares and Zarate said, a National Heroes Committee was created through Executive Order No. 75 to study and evaluate Filipinos of national prominence and recommend them as heroes “to recognize their sterling character and remarkable achievements for the country.”

In 1995, the committee submitted a short list of candidates to the then Department of Education, Culture and Sports (DECS), which did not act on the list, saying it could polarize the nation.

Colmenares and Zarate acknowledged that choosing one hero over another could lead to debates on controversies involving the heroes and that a lot has been said in favor of or against both Rizal and Bonifacio.

“It is true that Jose Rizal through his writings was able to put across the need for changes in the country that was dominated by Spanish colonial power. His writings influenced intellectuals who actively participated in the fight for reforms in society,” the lawmakers said in their explanatory note.

“Andres Bonifacio, on the other hand, was an intellectual impassioned by the need to change the oppressive and exploitative system not merely by writing about it but also by acting on it,” they said.

“The difference, in so far as their contribution to society is concerned, lies in the ability of Bonifacio to translate Rizal’s writings into a language understandable to the Filipino masses and to transform and develop them into practice. Because of his actual participation in the [Katipunan], Bonifacio was able to organize and mobilize thousands of [Filipinos] in a revolution that ended the [Spanish regime] and led [to the] Filipino nation’s independence,” they said.

Their bill would empower the National Commission for Culture and the Arts, the Department of Education, and the Commission on Higher Education to formulate policy that would make education on the life and heroism of Bonifacio part of the curriculum in elementary, secondary and tertiary schools, revise history books, and authorize dissemination of pertinent information.

The bill would also mandate the Department of Public Works and Highways to erect a Bonifacio bust in every province, city and town, apparently to equal or surpass the ubiquitous presence of Rizal’s image in the country.

Read Next
In the Know: We have no ‘national hero’
EDITORS' PICK
Is your company a growth champion? Stand up and be recognized!
Joe Biden sworn in as 46th U.S. president, urges end to ‘uncivil war’
PUP accord with DND also faces termination
4 senators want military, cops off UP campuses
Acer Philippines welcomes you to its first flagship store
New Year, New Rediscoveries
MOST READ
A shade at Roque? Vice asserts being a comedian, not a clown
Makati Shangri-La to close its doors temporarily starting Feb. 1
Biden says Trump wrote him ‘very generous letter’
Trump’s parting gifts to Biden: Roaring stocks, a weaker dollar, tons of debt
Don't miss out on the latest news and information.