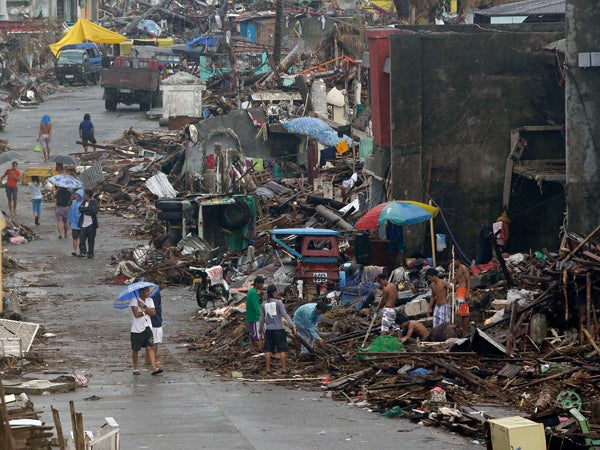 The comments came as the death toll from “Yolanda”, one of the most powerful typhoons to ever hit the country, continued to rise.

The National Disaster Risk Reduction and Management Council said 5,632 people had been confirmed dead while 1,759 were still missing following the category five storm earlier this month.

“The total rehabilitation will take three to five years, depending on the pace of our support system and the projects we implement,” Eduardo del Rosario, executive director of the NDRRMC, said.

He told reporters that President Benigno Aquino did not want to merely repair the damage but wants the new structures to be better than those that were standing before the storm.

“Our President wants the rehabilitation to be ‘build-back better communities,” so they can withstand future storms,” del Rosario said.

Public Works Secretary Rogelio Singson said: “We are looking at over P100 billion ($2.2 billion) of reconstruction, from livelihood, commerce, social services,” as well as infrastructure and power facilities.

That figure does not include the huge amounts already spent on immediate relief for the millions of people who were injured or left without food, water or shelter.

About P15 billion to P20 billion will go to providing shelter with some 60,000 to 80,000 families to be re-settled in two to three years, said Singson.

This will include the people whose homes were destroyed by the storm as well as those who will have to move out of a recently-declared 131-foot “no-build zone” from the coastline, Singson added.

The zone is intended to prevent a repetition of the large number of deaths that occurred after “Yolanda” brought massive storm surges that flattened seaside communities.

The United Nations made an initial humanitarian appeal for $301 million in aid for the typhoon victims just days after Haiyan hit. The UN will make another appeal for more funds in December.

A spokeswoman for the local UN office, Orla Fagan, told a news conference on Friday that donors had forked out $164 million so far.