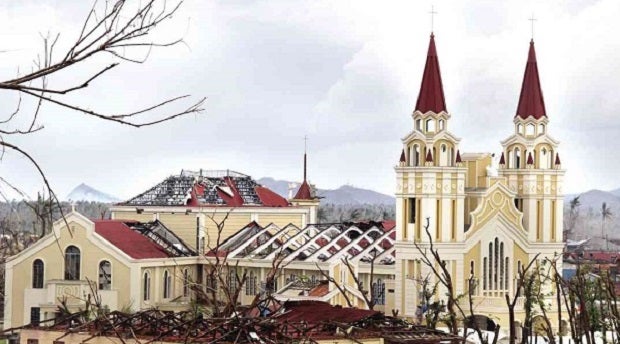 PALO, Leyte—It was not the typical homecoming that I usually looked forward to.

I was at the Inquirer news desk on the day that Supertyphoon “Yolanda” pummeled the Eastern Visayas, including my home province of Leyte.

After initial reports of the devastation started to come in, particularly the news that there were already about 20 fatalities in my hometown of Palo, I felt a strong compulsion to go home.

Most of the victims came from a coastal barangay. They drowned after storm surges reaching as high as 6 meters engulfed the village and washed away the houses.

I knew there would be more fatalities. But I had no way of confirming this as I was no longer able to contact my younger brother, Reuel, and his family and other relatives, after the supertyphoon destroyed all power and communication lines and completely isolated the province from the rest of the country and the world.

It was only two days later that I was finally able to talk to my brother. “Our roof was destroyed but we’re OK here,” he told me in Visayan via satellite phone.

I was relieved of the anxiety of not knowing, only for it to be replaced by worry over the likely damage done to our house.

Unsafe to live in

I had to go there to see for myself. But when to do so was the question. Things were getting out of control in Tacloban City and the place was no longer safe to visit, let alone live in. Everyone was rushing to get out.

There was no available public transport from Tacloban to Palo. The only alternative was a six-hour walk.

So I waited for the situation to normalize a bit.

It was only after mobile phone connection was partially restored that I finally decided to go home to Palo. I bought various sizes of tarpaulin from Binondo to use as a temporary roofing material. I also brought two generator sets.

But transporting them home was a problem since the only available form of travel to Leyte was by land, but that posed its own problems, mainly of security.

I later learned that a group of friends was going to Leyte by land for a relief and feeding mission for typhoon survivors in Tacloban and Palo. Calling itself “Because We Can,” the group was composed of volunteers from the National Press Club of the Philippines (NPC), Tuesday Club, Samahang Kartonista ng Pilipinas, Saturday Forum at Annabel’s and CDO Foodsphere.

The two-vehicle convoy left Manila for Matnog, Sorsogon, at 11 p.m. on Nov. 22, loaded with relief goods and food, and arrived in Tacloban City at 3 a.m. of Nov. 24.

In Tacloban en route to Palo, I ran into a neighbor who told me that his wife had died during the typhoon’s onslaught. I could not find the words to console him. I just looked at him as he walked away. I felt it was a portent of things to come.

When I finally reached Palo last Sunday, the sight of what Yolanda had wrought simply overwhelmed me. It looked like a nuclear bomb had been dropped over my hometown. Almost all the houses suffered damage of one form or another.  Fallen trees and electric posts were strewn all over. There was debris everywhere.

Except for the Palo Metropolitan Cathedral and the municipal hall, I could hardly find a structure that was recognizable.

The sheer force of the typhoon, which packed winds of more than 300 kilometer per hour, the world’s strongest typhoon on record, had altered the landscape and transformed Palo into a vast wasteland.

Stripped of their lush foliage and vegetation, the town’s surrounding hills and mountains became mere patches of brown. The big cross at the top of Guinhangdan Hill overlooking the town, ordinarily obscured by trees, was now completely visible.

Residents of Palo have been used to typhoons since Leyte is located in what climate experts call the “Typhoon Belt.” But for the past several years, the town has been largely spared from the more destructive weather disturbances, which seemed to  have moved upwards to the Bicol and Quezon regions and downwards to Northern Mindanao.

But on Nov. 8, a date which will forever be etched in my memory, Palo was again on the direct path of a deadly typhoon. This time, it returned with a vengeance.

I usually go home to Palo at least once a year, particularly for the town fiesta on Aug. 6. The last time I was there was on May 28 to attend my mother’s death anniversary. I therefore knew the place like the back of my hand. But this time,  I found myself in unfamiliar terrain. I became lost in my own hometown.

When I finally regained my bearings, I noticed that the Palo Public Library on the ground floor of the old Pedrosa house had been severely damaged.

As a kid, I used to go to this library to borrow books.

Facing the library was the cathedral where I was baptized and where I heard Mass whenever I was in Palo. The entire cathedral roof had been blown away and its dome had collapsed.

While still in Manila, I had watched a TV footage of the cathedral’s roof being blown away. The sight was really depressing, particularly for the members of my family.

In 2009, our family which had been designated the main sponsor of the town fiesta that year, donated P2 million to the Archdiocese of Palo to jumpstart the fund-raising drive for the renovation of the cathedral. Construction began a year later and was finally finished in 2012.

But what took two years to renovate was destroyed in just three hours by Yolanda.

Fr. Bernie Pantin, the town’s parish priest, is appealing to donors for help in the cathedral’s reconstruction.

Despite the destruction, the diocese on Wednesday, held the closing ceremonies of its diamond jubilee celebrations amid heavy rain.

Near the church was the damaged Palo campus of the University of the Philippines which used to be the Palo Puericulture Center, the town’s health clinic where I was born.

At the end of our street is the Palo Central School, where I finished my elementary education. Its roof had been blown away. Only its walls remain standing. For me this was a really depressing sight. I have fond memories of this school which I represented in several interschool quiz contests.

When I finally saw our house, I was relieved to see it had not been totaled, nor was it as badly damaged as I had feared. The roof of the second floor with its two bedrooms was ripped off by the howling winds but the roof over the sala, dining room and kitchen remained largely intact.

I felt we were still lucky after I saw that the collapsed houses of our neighbors and friends.

My niece, Carrie, showed a video she took as Yolanda pummeled the town. One could hear the ear-piercing sound of the winds which she described as similar to a jet engine preparing to take off. Outside the house, there was zero visibility. Everything appeared white. As the rains and winds battered the roof, I could hear my nephew, Jericho, praying the rosary, his voice growing louder and louder as the typhoon got stronger. They all huddled in the small corridor leading to the sala which was surrounded by solid cement walls and a narra door.

On the night before Yolanda’s onslaught, I had called up my younger brother to warn him to prepare for the world’s strongest typhoon which was coming their way and to stay in a safe place indoors.

But he sort of shrugged off my warning, saying the moon was bright and it was not even raining.

The next day, I called him up again but he could no longer be contacted.

Surveying the coastal barangays of our town, all I could see was complete desolation. Most of the fatalities came from the barangays of Baras, Candahug, Cogon, San Joaquin and Salvacion. Entire clans were wiped out by the storm surge. Joel Agner, the newly elected barangay captain of Cogon, and six family members were killed.

More than  two weeks after the killer typhoon, the stench of rotting corpses still lingers, a sign that there are still bodies that have to be recovered.

For residents of Palo, their horrifying ordeal was just another test of their endurance and resilience. They vowed to rise again from the catastrophe.

The messages on streamers hanging on the fence of the cathedral say it all:  “Tindog, Paloanon!” (Rise up, Paloanons), “Bungto nga gintikangan, ayaw naton bayaan!” (Don’t foresake the town of your birth), “Ibalik naton an Palo! (Let’s rebuild Palo),  “Palon-on ka, may mahihimo ka pa!” (You are a native of Palo, you can do something), “Lugar ng nag madulom, aton palamragon!” (Let’s brighten up our darkened place).

But out of despair and desolation came signs of hope and rebirth. Throughout my almost weeklong visit, I could hear the nonstop pounding of thousands of hammers driving into nails throughout the day and night. Palo (Visayan for wooden hammer) was rising from the rubble.

Family who lost 11 kin in Palo now safe in Cebu