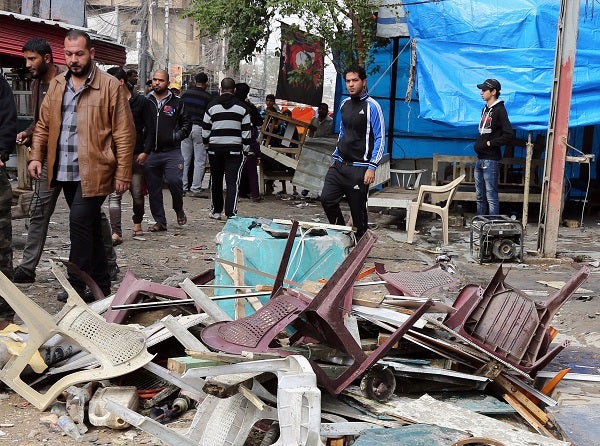 Iraqis inspect the aftermath of a late-night bombing at a cafe in Bayaa neighborhood, Baghdad, Iraq, Thursday, Nov. 21, 2013. The year’s death toll topped 5,800 amid a surge in unrest. AP PHOTO/Karim Kadim

BAQUBA—A market bombing north of Baghdad was the deadliest in violence that killed 48 people on Thursday, as the year’s death toll topped 5,800 amid a surge in unrest.

The flare-up has prompted Baghdad to appeal for international help to counter the worst bloodshed since 2008, just months before its first general election in four years.

Officials have voiced concern over a resurgent Al-Qaeda emboldened by the civil war in neighboring Syria, which has provided the jihadist network’s front groups with increased room to plan operations in Iraq.

Thursday’s attacks came a day after a spate of violence, mostly car bombs targeting Shiite districts of Baghdad, killed 59 people and wounded more than 100 in the highest death toll of the month.

Shootings and bombings struck in and around Baghdad and in north Iraq on Thursday.

In the deadliest incident, a car bomb exploded at around noon (0900 GMT) in a fruit and vegetable market in the town of Saadiyah, part of the restive ethnically mixed province of Diyala which has seen some of the worst bloodshed.

At least 32 people were killed and 40 wounded in the blast, officials said.

Saadiyah is populated mostly by Faylis, or Shiite Kurds, and is in territory Kurdish leaders want to incorporate in their autonomous region in the north over the objections of the central government.

On Nov. 14, a suicide bomber targeted a group of Shiite pilgrims in the town on the anniversary of the death of a venerated figure in Shiite Islam, killing 32 people.

Shootings and bombings elsewhere in Diyala, as well as in and around Baghdad and the main northern city of Mosul, left 14 others dead while security forces killed two militants.

Authorities in Diyala also found the bodies of a dozen residents snatched by kidnappers purporting to be in the security forces.

The 12 were executed and their bodies thrown into a river, reminiscent of targeted killings that were rampant during the worst of Iraq’s sectarian bloodshed in 2006 and 2007.

No group has claimed responsibility for the violence, but Sunni militants linked to Al-Qaeda often carry out such attacks, ostensibly to undermine confidence in the Shiite-led government and security forces.

“Their capability to conduct attacks has increased,” Deputy National Security Adviser Safa Hussein told AFP in a recent interview, referring to the Islamic State of Iraq and the Levant, an Al-Qaeda front group.

“By now they understand they can’t realize their ambition in establishing a state. Nor can they defeat the government.

“But they can work towards their goal in establishing indirect control in some of the areas, and making the state a failed state, which is a very good environment for them to flourish.”

Investigators searching for the gunmen behind the assassination of Iraqi President Jalal Talabani’s chief bodyguard, meanwhile, got into a firefight with one of the suspected killers in the Kurdish city of Sulaimaniyah.

The suspect and a policeman were both killed in the exchange, security officials said.

The unrest is part of a surge in bloodshed that has pushed violence to its highest level since 2008, when Iraq was recovering from the worst of its Sunni-Shiite sectarian war.

More than 5,800 people have been killed so far this year, according to an AFP tally based on reports from security and medical officials.

Prime Minister Nuri al-Maliki has called for Washington’s help in the form of greater intelligence sharing and the timely delivery of new weapons systems.

But diplomats and analysts say the government is not doing enough to address the root causes of the unrest, particularly frustration within the Sunni Arab minority, which complains of mistreatment by the Shiite-led authorities.—Haidar Khaled