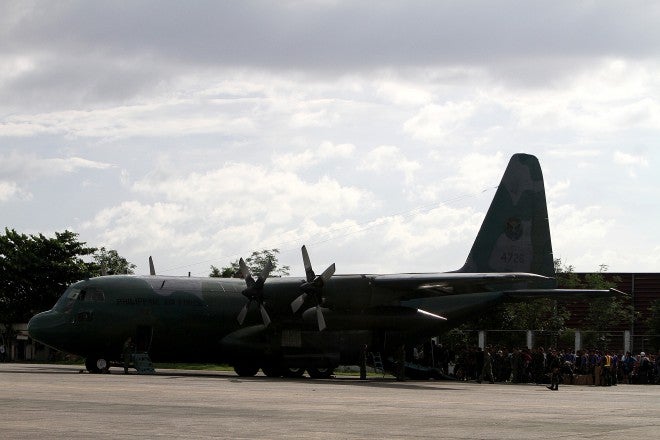 Philippine Air Force C130 aircraft with loads of relief goods and soldiers at Villamor Airbase in Pasay City to be brought on Tacloban City destroyed by Supertyphoon Yolanda. RICHARD A. REYES/INQUIRER

MANILA, Philippines—As delays marred relief efforts for victims of “supertyphoon Yolanda” (international name Haiyan) a week after its deadly onslaught, calls were made to temper criticism of the government’s response.

Iloilo Rep. Jerry Treñas said the people must unite and support the government, which has been doing all it could to help.

But “minor shortcomings” could not be avoided given the magnitude of the devastation, and the President was not a “magician,” said Treñas .

“This is not the time for fault-finding. The President needs all the help that he can get at this time so that the government can effectively carry out its mission of providing relief for our people and expedite the restoration of normalcy in areas affected by Yolanda,” Treñas said in a statement.

“Minor shortcomings are to be expected in situations like these and the president is no magician that he can do everything with just a stroke of a wand,” he added.

Critics should just focus on helping, he said.

“It’s very unfair that some people still cannot resist taking potshots at President Aquino and seem to find joy trying to create the impression that our government is doing nothing to help our people whose lives are now in shambles because of Yolanda,” he said.

Former Albay lawmaker Edcel Lagman noted that “Yolanda’s” might was unparalleled and was no match for the preparations, but also said he did not intend to make excuses for the government’s shortcomings.

“Without being an apologist for the inadequacies of the government’s initial responses in the aftermath of typhoon Yolanda’s super fury, critics must understand that the unprecedented massive devastation, deaths and debris upset the government’s preparation and experience in coping with disasters,” Lagman said in a statement.

He also said expressions of disapproval must be grounded in realism so as not to worsen the situation.

“Criticisms must be articulated and are welcome, but criticism couched in hyperbole must be avoided in order not to exacerbate the emergency,” he said.

According to him, even the United States government was left scrambling in the aftermath of hurricane Katrina.

“Even the United States was initially disorganized in its immediate relief and rescue operations in the wake of hurricane Katrina in New Orleans and the Gulf Coast region,” he said.

The US government was scored for delays and mismanagement, he said, adding the criticism was prompted by TV reports of New Orleans officials and residents who lacked water, food, shelter and were surrounded by the dead, days after the hurricane.

There were also criticism directed at the US Federal Emergency Management Agency and the Department of Homeland Security, he said.