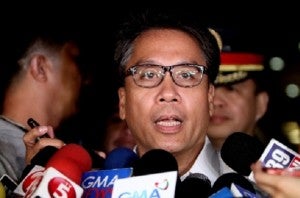 MANILA, Philippines – In a bid to prove that the government is in charge of the situation in typhoon-ravaged areas in the Visayas, Interior Secretary Manuel “Mar” Roxas II on Thursday assured the public that relief operations on the ground were organized.

(“The system here is clear. It’s just the need is more than can be handled. Even having gallons and gallons of water, with Yolanda’s strength, the need has become like filling up a gigantic swimming pool,” he told Radyo Inquirer 990AM in Filipino.)

“What is important is that the relief efforts are organized and we are slowly able to send relief to our people,” Roxas said.

He gave a similar statement in an interview on Thursday morning with CNN, whose veteran reporter Anderson Cooper had called the situation in Tacloban City among the “very desperate” situations he had encountered in his years of covering disaster.

“Well, through your network I can assure our people and the whole world that the entire force of the government of President PNoy (Benigno Aquino III) is looking after our people here. If we have set aside gallons or pails of water, it turns out that the need is that of a swimming pool,” he told CNN’s Andrew Stevens.

Cooper trended on social media for his reports about the misery in Tacloban City, which sustained the greatest number of fatalities from the typhoon.

“As for who exactly is in charge of the Philippine side of this operation, that is not really clear,” Cooper said in his report.

This was followed by several news articles asking the same thing.

Stevens grilled Roxas, asking why the people are still asking for water and food, six days into the relief operations.

“Is the situation under control? The relief efforts are now working as effectively, as efficiently as they could be?” the reporter asked.

Roxas said, “Nothing is fast enough in a situation like this.”

“Everything that we have, if this was a gun, all bullets are being deployed… And slowly as we are clearing the streets we are able to reach the people in the interior. Imagine a situation from zero, no power, light, water, communication. Nothing. You have to build the social infrastructure as well as the physical infrastructure,” he added.

But Stevens pointed out, “We all knew the storm was coming. We knew that it was going to be perhaps one of the most intense storms we’ve ever seen.  The President said the day before the storm arrived that Manila stood by ready to support everyone. From my view, I would say that did not happen quickly enough.”

Roxas argued that the local government unit is the first responder in times of calamity.

“The national government is supposed to come in Day 2 and Day 3 to be able to support that. What happened is that the local government unit…was literally swept away,” he said.

‘Every day we pick up the bodies’

Asked about the city mayor’s unanswered request for 700 body bags, Roxas said, “It’s chaotic. There [are] no baggage tags. All the supplies just come in, in unmarked boxes. It’s very easy for 700 body bags to get lost.”

Nevertheless, he said the city and the military have just received another 500 body bags.

The CNN reporter also asked why they have been passing by the same corpses on the street every day. The same observation was made by Inquirer reporter Marlon Ramos over the radio.

“Let me just correct that. They are not the same bodies. Every day we pick up the bodies. I, myself, led a cadaver recovery team yesterday and the day before,” Roxas told Stevens, saying they were just in the same body bags.

Earlier, he explained over Radyo Inquirer 990AM that four trucks pick-up the bodies every day. However, he said the residents bring more bodies from other areas into the main road. Kristine Angeli Sabillo