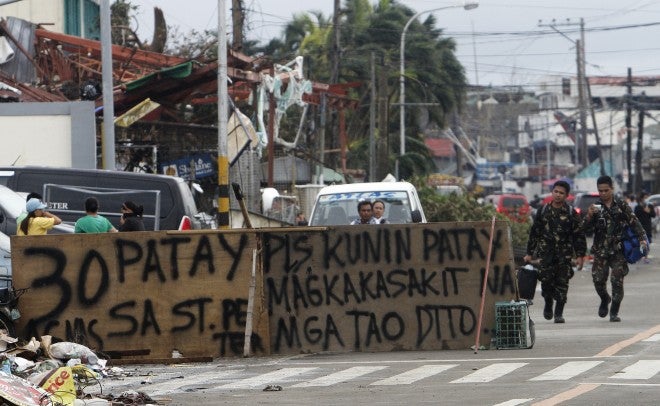 A signage near the St.Peter Chapel, Tacloban Leyte. RAFFY LERMA/INQUIRER

TACLOBAN CITY, Leyte, Philippines — A task group of the police, military and disaster response officials has been focusing on the retrieval of bodies from the streets as well as clearing the roads of debris, six days after “supertyphoon Yolanda” (international name Haiyan) that devastated this city.

The task force, which was formed immediately after the onslaught of  “Yolanda,” was composed of the Philippine National Police (PNP), Armed Forces of the Philippines (AFP) and the Regional Disaster Risk Reduction and Management Council (RDRRMC).

Based on their latest count, Madroñal said 696 cadavers had been recovered by soldiers and were buried in a mass grave in Barangay Basper, about 14 km from the city proper.

Still, many bodies littered the streets and were found in collapsed structures almost a week after “Yolanda” wrecked the city.

On the other hand, he said, 11 military trucks from the AFP national headquarters were scheduled to arrive on Thursday to augment the present 21 military trucks that were being used in the retrieval and clearing operations.

Danilo Murillo, chairman of Barangay 61, said at least 20 bodies were found in their village. Of the number, only three had not been buried, he said.

The military, he added, had promised to retrieve the three but they had not returned.

Murillo said that like many of the villages in Tacloban, Barangay 61 also suffered the wrath of Yolanda. Of 220 houses, less than 10 remained standing. Many of the residents were staying at the Tacloban astrodome.

Tacloban Mayor Alfredo Romualdez admitted he was frustrated by the slow recovery of the bodies as he reiterated his call to the national government to initiate humanitarian flights so residents of Tacloban could leave the city.

“I’m just asking for a humanitarian flight.  You cannot live in a community living with the dead. That is why you see the exodus of people leaving out of the city,” he said.

Romualdez said he was frustrated by the slow retrieval operations but admitted they lacked manpower, logistics and vehicles to hasten it.

“We need the military, the Marines and Police to recover the bodies,” he said.

Lack of food and water supply in the province has forced thousands of people from Tacloban and other areas in Leyte to leave the province in the aftermath of “Yolanda.”

The military C-130 planes have been giving free rides to residents who want to go to Cebu or Manila although the elderly and the injured have been made the priority.

The Philippine Navy is also offering free ride to Cebu.

Among those lining up for space on board the naval ship to Cebu was Lilia Queno, 44, of Barangay 96 in Tacloban.

She said she and her family decided to leave the city due to the absence of food and water in Tacloban.

“We are also afraid that an epidemic might occur due to the heaps of dirt and dead bodies in the streets,” she said.

Queno said they might return to Tacloban in two or three months upon the improvement in conditions.

Mayor Romualdez said he was optimistic that those who left Tacloban would return eventually to the city.

Both Madroñal and Inspector Romuel Nacar, PNP-Eastern Visayas spokesperson, said law and order had been restored in Tacloban where looting had occurred.

He said gasoline stations, commercial establishments and banks have been manned by the PNP Special Action Force and soldiers.

“There is no looting incident reported,” said Nacar.

About 900 policemen have been deployed in and around the city and 200 of them have been assigned in the city’s commercial area.