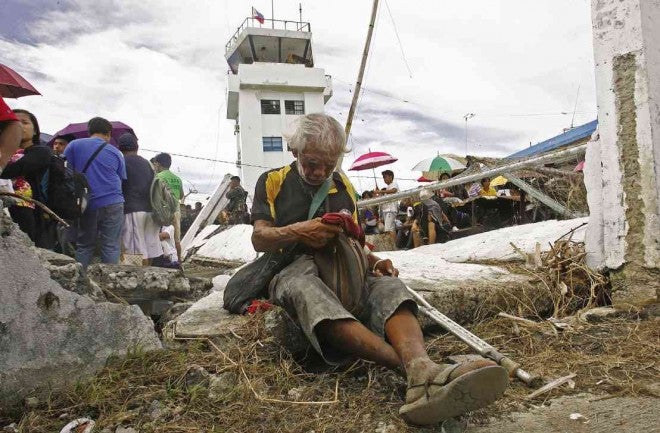 WHILE many in Tacloban City are raiding warehouses and stores in search of food, many others, like 69-year-old Elly Tingson, patiently wait for a ride out of the city at the Tacloban airport. RAFFY LERMA

MAASIN CITY—Local officials in Samar and Southern Leyte provinces  are on high alert following reports that looting has already reached their areas.

In the capital Catbalogan City in Samar, provincial officials are asking police to secure warehouses for relief goods and rice after receiving reports that looting had occurred in the province’s Sta. Margarita town.

Mercado quoted a report to him by a policeman about an attempt to loot  Gaisano Capital in Sogod town, Southern Leyte, that was thwarted by security guards of the department store.

Radio station dySL received the same piece of information from an unidentified woman caller. The woman told the radio station that she had just left Gaisano Capital around 10 a.m. on Tuesday when two men and a woman accosted her.

The three took the food items that she bought for P1,700. She said she had to let go of these because she feared that the three, who spoke Waray, would harm her.

Mercado, the governor, said there was a report of a robbery in Hindang town but this has yet to be confirmed.

Senior Supt Armando Bolalin, police provincial director, said at least 140 prisoners had escaped from the Leyte provincial jail in Tacloban prompting police to be on high alert for lawless elements on the loose.

Caidic said many houses in Samar were also ransacked after residents fell for a false alarm about a supposed tsunami and left their homes to flee to higher ground.

Asked who could be responsible for this, Caidic said: “Crazed people who have nothing better to do.”

But the incident, she said, prompted authorities to take extra precaution as Samar continues to have no power and communication lines, which are ideal situations for criminals to strike.

She said Samar officials had been asking for more policemen and soldiers, but the request has remained unheeded.

“It seemed that everyone is in Tacloban. They don’t love us here. They  love only Tacloban. It is frustrating,” she said in a phone interview.

Insp. Romuel Nacar, PNP Eastern Visayas information officer, belittled the looting reports, saying these were cases that had already been dealt with by the police.

Nacar said policemen had set up checkpoints and were now on patrol, and vital installations had been secured.

Residents of Baybay City, Leyte, however, blamed the absence of provincial officials for the looting. Maloth Galenzoga, businesswoman and defeated mayoral candidate, said there would have been no shortage of food in Leyte if relief goods had been distributed quickly.

Because of the food shortage, Galenzoga said, even towns that were unscathed when Supertyphoon “Yolanda” struck are now suffering from the storm’s effects because of the looting.

“It is chaotic in Tacloban because the concern of the people was not addressed. Baybay is also affected because many steal our food,” she said.

“We are like a ship being abandoned by our captain,” she said in a press conference in Cebu City on Wednesday after trying to get help for Baybay.

While Baybay did not suffer as badly as Tacloban, Galenzoga said the entire city was suffering from lack of food and other basic supplies.

Like many parts of Eastern Visayas, Baybay also has not received any help from either the provincial or national government.

Galenzoga said so many groups wanted to help but did not know whom to get in touch with for coordination. Reports from Doris C. Bongcac, Jani Arnaiz, Carmel Matus, Jennifer Allegado and Connie E. Fernandez, Inquirer Visayas