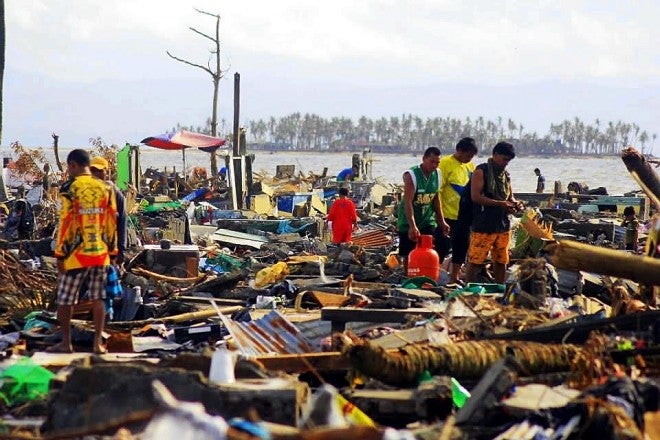 A week later after the Supertyphoon Yolanda hit the city of Tacloban, homeless residents scamper for whatever things they could rescue. They are asking the government for food and shelter. MARK ALVIC ESPLANA/INQUIRER

MANILA, Philippines — Four “storm chasers” of the Philippine Atmospheric, Geophysical and Astronomical Services Administration (Pagasa) who went missing at the height of “supertyphoon” Yolanda’s murderous swath through the central Visayas are safe in Leyte.

He, however, said a report on Wednesday that missing weather observer Salvacion Avestruz was found in a Cebu hospital turned out to be false.

“We thought she had been accounted for in a hospital in Cebu. But it turned out we had rejoiced prematurely,” he said.

The last the Pagasa main office heard from Avestruz was on November 8 at around 5 a.m. after she sent out data from the Tacloban weather station in the airport terminal. A storm surge then hit and the terminal and weather station were completely destroyed and Avestruz swept away.

Her colleagues, chief meteorological officer Mario Peñaranda and observers Romeo Elvina and Anthony Sanchez, were seriously injured but were safe.

Agustin said the four weather specialists had apparently been in La Paz, Leyte, since Monday but there was no means of communicating with them. “They were advised by a local official not to leave because it was dangerous to travel to Tacloban City,” Agustin said.

He said the storm chasers were using a pickup with government license plates.

“They were told there were armed men along the way and their vehicle might be intercepted because people might think they were carrying relief goods,” Agustin  said.

But as soon as the area was cleared, the four proceeded to Palo to assure Pagasa officials they were safe.

“Our regional director in Legaspi City, Landrico Dalida Jr., confirmed the four are safe. We thought they were missing because they had not been in touch with our head office in Quezon City for the last three days,” Agustin said.

The team had been sent to Leyte the day before the storm to brief local officials about the monstrous typhoon that was on the way and to measure Yolanda’s intensity.

But from Matnog, Sorsogon, they could not proceed to Samar because the typhoon warnings had been raised and no ferry service was available. But as soon as Yolanda passed, the PWEA president said, they were instructed to proceed to Samar to survey the damage.

Aside from the Tacloban weather station, two others in Guiuan, Eastern Samar, and Coron, Palawan, were also destroyed.

“Those buildings and weather instruments are estimated to be worth P7 billion,” said Agustin, adding that among the equipment wrecked in Guiuan was a P450-million Doppler radar.