MANILA, Philippines — Senator Grace Poe wants the Senate to review the national government’s disaster risk management capabilities amid widespread perception that it has been moving rather slowly in bringing relief to the survivors of “supertyphoon Yolanda” (international name Haiyan).

Poe, an ally of President Aquino’s and the chair of the Senate committee on public order, said the inter-agency National Disaster Risk Reduction and Management Council should a stand-alone agency to become more efficient and proactive in addressing disasters.

“[To] effectively serve the nation, the Philippine government and the NDRRMC need not primarily burden itself on reactive relief efforts, but proactive efforts,” Poe said in one of the premises of her Senate Resolution No. 362.

“[For] more efficient relief efforts during disasters and emergencies, it is proposed that NDRRMC be re-established as a separate and independent agency from the DND [Department of National Defense],” Poe added.

Poe said that as the NDRRMC may feasibly be considered as a separate and regular department, “it is also proposed that its Chief Officer be accorded cabinet rank or level.”

In her resolution, Poe called on the Senate committee on national defense and security “to review, in aid of legislation, on the present disaster risk management efforts and capabilities of both national and local government with the objective of recommending a more efficient coordination government plan addressing calamities, catastrophes and emergencies and submitting possible amendments to existing laws.”

The panel is chaired by Sen. Antonio Trillanes IV. 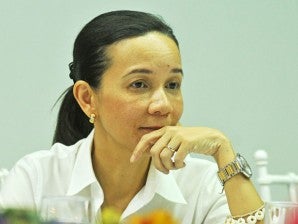 Senators earlier called on the national government to restore peace and order in Tacloban City and other areas affected by supertyphoon Yolanda to hasten the distribution of relief items amid increasing desperation among survivors.

“I think that tighter security measures should be in place and more police personnel should be deployed in the area,” said Sen. Grace Poe, chair of the Senate commitee on public order.

Poe added that the distribution centers of relief goods “should be made known through tv radio and any other means so that the victims know where to go to seek assistance.”

“It should also be the priority of the Department of Health to inspect and make sure hospitals are operational,” Poe told the Philippine Daily Inquirer.

Opposition Sen. Joseph Victor Ejercito, a former mayor of San Juan, said order should be re-established to protect those bringing in aid from looters and even hijackers.

“(Restore) peace and order, so that the relief efforts underway do not encounter trouble like hijacking and looting,” Ejercito said.

He also called on the government to normalize operations in existing ports and airports so they could be utilized for delivery of relief items.

“Stop blaming local government officials and instead work together for the relief and rehabilitation efforts,” Ejercito said.

Still, Ejercito called on the public to rally behind the Aquino administration in its relief and rehabilitation efforts in the Visayas.

“Even if I am in the opposition, based on my experience as a former local executive, I know how hard it would be to respond to the distress calls at the same time. That is why I do not criticize the President at this time,” Ejercito said.

Sen. Loren Legarda, the chair of the Senate committee on climate change, batted for faster relief for the hungry.

“I do not want to be seen as  intervening in the executive’s role, but the setting up of a continuing soup kitchen for the hungry, clearing operations for the debris, mobile hospitals set up in designated areas in the city, tents for all the homeless, coordinated efforts for the distribution of goods donated by foreign donors like Oxfam, etc., therapy and counselling sites for those who need, water stations for potable water, among others,” Legarda said.

“It is a Herculean task really. Easier said than done,” Legarda added.

Trillanes said he saw inefficiencies in the government’s relief efforts but added that he would not discuss them at this time.

“We are taking note of the shortcomings and inefficiencies of the government’s response to the disaster but we’re still in the thick of things so it’s more prudent to get out of their way first,” Trillanes said.