MANILA, Philippines— Lawyer Lorna Kapunan, the legal counsel of Janet Lim Napoles said Tuesday they wanted to hasten the bail hearing because her client wanted to visit her mother’s grave.

In an interview after a court hearing on Napoles’ bail petition, Kapunan said the presentation of witnesses and pieces of evidence of the prosecution was taking so long, citing that if the original schedule had been followed, the hearing for their petition should have been finished last week.

“She’s very sad because the prosecution took so long. She may not be able to visit her mother because bail hearing is still pending. That’s a concern. The prosecution does not understand why we want to rush it,” Kapunan said.

The country observes All Saints’ Day every November 1. It is in this time of the year when Filipino families usually visit the grave of their departed loved ones. 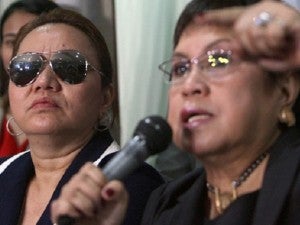 Napoles’ mother is buried at the Heritage Memorial Park in Taguig City.

“We very well know she’s very close to her mother,” Kapunan said, citing the instance when Napoles visited her mother’s tomb before she turned herself in to President Benigno Aquino III after a warrant of arrest was issued against her for serious illegal detention of Benhur Luy.

When Luy was presented for the first time before Judge Elmo Alameda of Branch 150 of Makati City Regional Trial Court by the prosecution panel, the defense team questioned the slow examination on Luy, arguing that the other camp has been eating the time for them to present their evidence.

Alameda, however, said he cannot make an order on the matter as he cannot teach the prosecution the manner by how they should present their evidence.

Kapunan said bail hearings should be summary in nature. She also cited the long weekend as among their concerns.

“This is sad that she will not be able to join her mother. And that is why we have been trying to speed up this bail hearing but apparently to no avail,” Kapunan said.

The cross examination of the defense team on Luy will be continued on Wednesday at  9 a.m.

Pimentel: We can still get the truth on PDAF

DFA asks Sen. Estrada to comment on request to cancel his passport