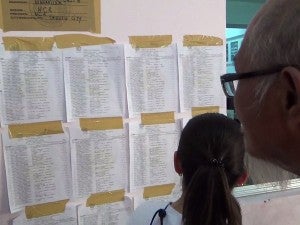 A senior citizen voter searches for his name at the voting master list in Maharlika Village, Taguig City. Photo by Ryan Leagogo/INQUIRER.net

MANILA, Philippines – Almost 75 percent of the winning candidates in the barangay (village) elections have already been proclaimed, the Commission on Elections (Comelec) said Tuesday.

“Out of 42,028 positions, 30,790 candidates for these positions have been proclaimed already,” Teopisto Elnas Jr. Director for Election and Barangay Affairs, said in a press conference.

Elections in Zamboanga City and Bohol were postponed due to the security situation and the recent earthquake, respectively. Calayan faced delays because of election paraphernalia not being delivered on time due to bad weather, while in Pikit, teachers refused to serve as Board of Election Tellers for fear of violence from threat groups.

Comelec Chairman Sixto Brillantes Jr. said that their target was 75 percent of the winning candidates be proclaimed within 24 hours.

Polling places closed 3 p.m. Monday. “We expect that by late this afternoon, the figure will go higher,” Brillantes said.

“By tonight or by tomorrow we should be able to finish all of the [remaining proclamations],” he said.

Comelec to suspend proclamation of winning bets with poll issues

Comelec to hold barangay elections in 29 Mindanao villages on Wednesday