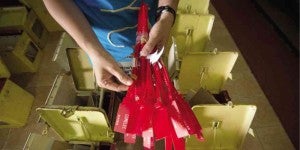 MANILA, Philippines — The Commission on Elections received reports of official ballots and ballot boxes being snatched early Monday as millions of voters trooped to public schools to cast their votes for the barangay (village) elections.

Despite these reports, Comelec Chairman Sixto Brillantes said there were “no major problems so far”.

Brillantes said he inspected Paranaque High School in San Dionisio after voting and said that he was planning to inspect other precincts in Manila.

Reports reaching the Comelec monitoring center included ballot snatching in Antonio, Catubig, Northern Samar. The ballot box was forcibly snatched from the Board of Election Teller (BET) around 12 a.m., the report stated.

Official ballots and other election paraphernalia for some clustered precincts with a total of 347 registered voters were also reported to have been snatched around 7:15 a.m. in Barangay Bukut Umus, Tabuan Lasa, Basilan.

“Ballot snatching is an election offense. In cases like this where there are intimidation and irregularities, we have a resolution that we will no longer postpone. We will place the area under Comelec control,” said Brillantes.

“We want to prevent that, so if there is disorder and [the winning candidates are not] proclaimed … [we will take control],” he said.

Before Monday’s polls, the old building of the Padre Burgos Elementary School in Sta Mesa, Manila, which was opened as a voting center to two villages were partially damaged by fire around 11 p.m. Sunday.

Some election documents reportedly got wet during efforts to put out the fire, according to the report.