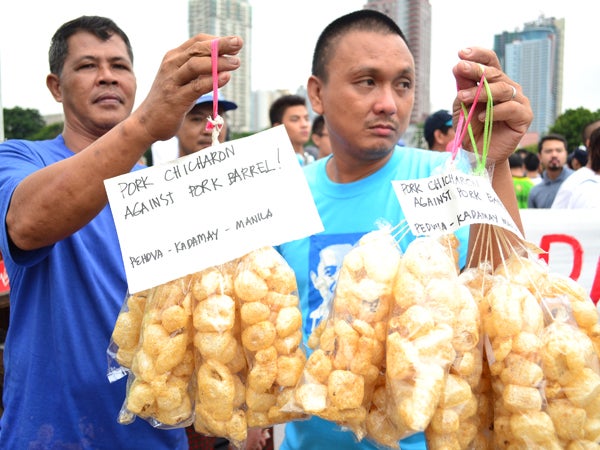 PORK ‘CHICHARON’, NOT PORK BARREL Vendors join the “Million People March” against the pork barrel as they take the opportunity to sell another kind of “pork” at the Luneta Park on Monday, Aug. 26, 2013. KRISTINE SABILLO/INQUIRER.net

MANILA, Philippines — Vendors trooped to Rizal Park on Monday to join the “Million People March” against the pork barrel system.

In defiance of the city’s zero vending policy, the group brought both their wares and protest banners in support of the “picnic rally.”

“Scrap pork barrel, buy pork chicharon!” was among the calls being peddled by the vendors.

The People’s Democratic Hawkers and Vendors Alliance of Kadamay were initially barred by police and park authorities from entering the Luneta grounds because of the existing ban.

But Joel Meralbes, the group’s spokesperson, said they were able to negotiate for a small area near the entrance.

Meralbes said they “expected a lot from the tuwid na daan [campaign] of the new administration” but were disappointed with how the national and local government were treating the vendors.

He said they were calling for the abolition of the pork barrel and the zero vending policy in Manila, as well as to ask authorities to respect their right to livelihood.

“Our first priority in coming here is to join calls for the abolition of the poerk barrel . . . We also want to know what programs are being funded by the congressmen for livelihood. This should not have happened if there were such projects,” Meralbes said in Filipino.