MANILA, Philippines — Groups and individual artists were among the first to set-up at Rizal Park for Monday’s “Million People March.”

Matthius Garcia, an artist from Cavite, immediately caught the attention of media and participants with his life-like model of national hero Jose Rizal.

Garcia said he had been working on the fiberglass model for three months and decided to finish it for the protest. 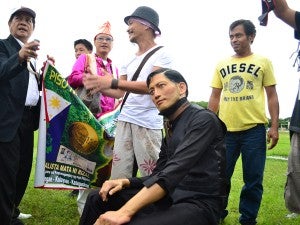 ‘PEPE AGAINST PORK’ Filipino artists gather at the Luneta Park on Monday, Aug. 26, 2013, for the “Million People March” for the abolition of the Priority Development Assistance Fund (PDAF) or “pork barrel”. With them is Dr. Jose Rizal, or rather, a life-size creation by Mathius Garcia in keeping with National Heroes’ Day also today. KRISTINE SABILLO/INQUIRER.net

He said it was his contribution for National Heroes Day and the “picnic rally.”

Garcia said his Rizal was wearing black to express his grief about what was happening to the Philippines.

Meanwhile, Jay Del Rosario of Kabataang Artista para sa Tunay na Kalayaan (Karatula) said they would set up a booth for artists and would parade their own of “Higantes”. The 14-foot paper mache giant will depict a pig dressed as the president.