MANILA, Philippines – Thousands converged at the Luneta Park for the “Million People March” Monday amid the threat of rain to call for the abolition of the pork barrel.

As of 9 a.m., a volunteer spoke over a public address system, welcoming participants and calling for transparency and accountability in government. This was followed by the singing of the national anthem.

In another portion of the park, schools held a mass.

Many smaller groups laid out mats on the muddy ground, content to watch others while having their own picnic.

Lawyer Eirene Aguila, one of the assigned spokespersons of the participants, said they were expecting more to come and participate in the pocket discussions in the area. She said it would help others understand the issue more. 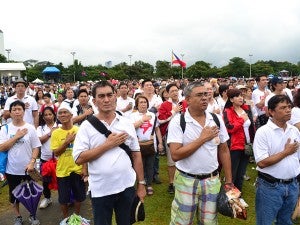 Aguila said although people would come and go, they were hoping to gather as much to make their voices heard.

In addition to discussions on the pork barrel system, Reyes said there would also be several performances from individuals such as fliptop artist BLKD and Darryl Shy of The Voice.

Earlier in the day, a babaylan also facilitated a ritual of native chanting and prayer for the betterment of the country.