To his sister Mila, Jun Magsaysay is the guy to ‘mambo’ | Inquirer News
Close
menu
search

To his sister Mila, Jun Magsaysay is the guy to ‘mambo’ 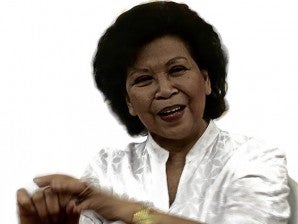 MANILA, Philippines—In a country where politics is, more than anything, a family affair, it is not unusual for a spouse, parent, child or sibling to stand in for the candidate at campaign rallies.

Milagros Magsaysay-Valenzuela, the daughter of the late President Ramon Magsaysay, says she is more than happy to proxy for her younger brother, Jun Magsaysay, who is seeking a Senate seat under the administration’s Team PNoy.

The charming and unruffled former public relations executive relishes her surrogate role because it is a chance for her to impart to the people the lessons and ideals of their father, the populist politician who remains the most popular Philippine President in history.

Not having any political ambitions herself, Valenzuela says she can present to the voters not just her brother’s political profile but also his human side, sometimes to the point of revealing stuff that he is much too modest to offer.

He is going to be endorsed in his TV commercials by someone laid back like himself, the unexpected star Richard (“Sir Chief”) Yap for free.

She also has no qualms about breaking into song during campaign rallies, particularly their late father’s catchy campaign jingle, “Mambo Magsaysay,” composed by the late Sen. Raul Manglapus, another distinguished Filipino politician who was one of President Magsaysay’s bright boys.

According to the song’s still quite relevant lyrics, “everywhere you look [there] was a bandit or a crook” and that “peace and order was a joke” until Magsaysay came along. It also complains about “too much people’s money being spent but no honest government,” and promises that there will be “no more built-in 10 percent if Magsaysay is President.”

“We still have the very same, if not worse, problems now,” Valenzuela said in a recent interview with Inquirer editors and reporters.

“Magsaysay is my guy” was also the historic campaign’s battle cry.

Magsaysay’s three children grew up becoming “public curiosities” as the offsprings of a hugely popular President, the original “man of the masses” who met an untimely end in a plane crash in 1957.

Valenzuela dismissed suggestions that her brother was using the family name to win over voters. On the contrary, she said, it was their father’s legacy that has made Jun Magsaysay seek public office.

“Jun’s purpose in running is he wants to serve the people. Jun is very passionate about the legacy of our father. That’s our only treasure. That’s our most precious gift from him—the name. He (Jun) will fight tooth and nail for the name. Our family wants to keep it as it used to be, respected and, hopefully, loved,” she said.

Like the late President Magsaysay, her brother is content with being appreciated by constituents for his public service, said Valenzuela.

“What is the nicest feeling of being a public servant? To know that the people appreciate what you do for them. When my father died, we were so shocked at how the people felt toward him,” she said.

The younger Magsaysay first entered politics in 1965, winning a congressional seat in the Magsaysays’ home province of Zambales. He became a senator for two terms, from 1995 to 2007.

Asked if she finds it harder nowadays to “sell” her brother to the voters, Valenzuela tends to agree as she says he is already 74 and has been out of politics for some time.

“When he told me he was running, I asked if he had forgotten the logistics problems and the physical strain (of previous campaigns). I said, ‘You’ll be 80 when your term ends.’ But he said, ‘Should I just wait around until I’m 80 when I can still do something for the people?’ It’s nothing ventured, nothing gained for him,” Valenzuela said.

While Jun Magsaysay does not aspire to become exactly like his late father, Valenzuela said she can say with a straight face that her brother is a “worthy son.”

“My father made mistakes, he was not the perfect President. But his intentions were good, to serve the people. To a certain degree, my father achieved many things for the common good of the people. His power came from the masses, but he was not conscious of it,” she said.

All the Magsaysays are expected to live up to the revered late President’s legacy of “integrity, honesty, hard work and compassion for others, especially those who have less in life,” Valenzuela said.

“In our family, what we believe is that helping others is an everyday thing. But if you have the chance to help more with a position in government, you should not say that you don’t want to. Jun is like that, he will not refuse a chance to help. Maybe he will hem and haw, because it’s not easy [being a public servant], but when he gets started, he’ll go straight ahead to the finish,” she said.

However, her brother is also strong enough to face the prospect of losing, said Valenzuela. He is not the type to mope and sulk but will just move on and keep himself busy in another enterprise, she said.

“He is not afraid to lose. But he will  always do his best to win,” she said, recalling how Jun Magsaysay lost his bid for reelection to the House of Representatives in 1969 and again failed to win the vice presidency in 1992.

“If you’re rejected, it’s OK to feel bad, but at least you tried. He’s not afraid to lose because he has no other agenda,” she said.

Valenzuela said she could not forget the courage shown by her then 18-year-old brother when their father died, leaving him with the responsibility of becoming the head of their family.

He went into business to secure a better life for the family, “to save our family from going hungry,” she said.

Unknown to many, according to Valenzuela, Jun Magsaysay is the acknowledged “Father of Cable Television” in the Philippines, being the founding president of Colorview CATV Inc., the country’s first cable company, which initially serviced his native Zambales.

Her brother also became a “techie” even before the term became popular and hence can relate to youth issues, she said.

“He immerses himself in the latest technology. In fact, during his first term as senator, when the E-Commerce Law was passed, I remember one senator saying, ‘Oh, Jun’s bill has passed, the one only he understands,’” she said.

The younger Magsaysay’s candidacy is also an expression of support for President Aquino’s administration, Valenzuela said.

“(Aquino) has no other agenda but to do good as President, that’s why my brother is running again. He saw in the President the political will, so he wanted to be there helping, if given the chance by the voters,” she said.