US candidates ready for VP debate

WASHINGTON — Republican vice presidential candidate Paul Ryan and Vice President Joe Biden prepared for their only debate of the 2012 campaign with challenger Mitt Romney’s camp looking to build upon his newfound momentum, while President Barack Obama’s camp hopes to stop his slide in the wake of a lackluster performance at last week’s debate.

Thursday’s vice presidential debate in the state of Kentucky comes at a volatile moment in the election, putting the contrasting political skills of Biden and Ryan on display for millions of viewers less than four weeks before Election Day. 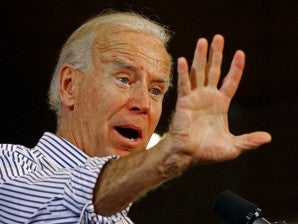 In this Oct. 2, 2012 file photo, Vice President Joe Biden speaks in Asheville, N.C. Four years ago, Biden was careful not to appear overly aggressive in his vice presidential debate with Sarah Palin, then a newcomer to the national stage. Now, as he prepares to debate Paul Ryan, a 14-year House veteran and the top Republican budget writer, Biden is less concerned about looking like a bully. AP FILE PHOTO

But vice presidential encounters rarely make a significant difference in a White House campaign, although aides engage in the same sort of attempt to shape public expectations as when the men at the top of the ticket are ready to face off.

So, while it’s tempting to cast the vice presidential debate as a pivotal event, the encounter is more likely to set a tone and a foundation for Tuesday’s town hall style debate between Obama and Romney in Hempstead, New York. Still, if Biden or Ryan emerge as a clear winner, it could either help correct the bad story line Obama provoked by his debate performance last week in Denver or strengthen Romney’s image as a surging challenger.

Public opinion polls suggested the impact of last week’s presidential debate was to wipe out most, if not all, of the gains Obama made following both parties’ national conventions and the emergence in late summer of a videotape in which Romney spoke dismissively of the 47 percent of Americans whom he said pay no income taxes, feel like victims and don’t take personal responsibilities for their lives.

Ryan, 42, has suggested his youth will be an asset in connecting with voters at the debate against the 69-year-old former senator. But risks abound for the Republican rising star, who hasn’t participated in a campaign debate since his first run for office 14 years ago.

And while Ryan is a hero to conservatives, he may be too far to the right for many Americans, especially in his plan to revamp health care for the elderly and his views on abortion 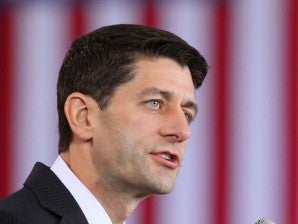 In this Oct. 8, 2012 file photo, Republican vice president candidate, Rep. Paul Ryan, R-Wis. speaks in Swanton, Ohio. Ryan is preparing for his debate against Vice President Joe Biden, a man who has been sparring over public policy since the Wisconsin congressman was learning to talk. AP FILE PHOTO

Biden is a former chairman of the Senate Foreign Relations Committee and a skilled debater, both within the administration and against its critics, and someone who Obama seeks out on major decisions. But the vice president is also prone to gaffes with a long history of freewheeling, foot-in-mouth moments.

In the 2008 debate against Republican vice presidential candidate Sarah Palin, Biden was generally thought to be holding back in order not to appear to be attacking a woman, something that is unlikely to happen in Thursday’s debate.

Accordingly, Ryan is bracing for Biden to try to help Obama overcome a rough patch by staking out an aggressive tone.

“I really think that because they had such a bad debate that Joe is just going to come flying at us,” Ryan said this week.

Whatever the impact of the Biden-Ryan encounter, last week’s presidential debate boosted Romney in the polls nationally and in battleground states, to the point that Obama was still struggling to explain a performance even his aides and supporters say was subpar.

“I think it’s fair to say I was just too polite,” he told radio host Tom Joyner in an interview late Tuesday. “… But, you know, the good news is, is that’s just the first one,” he said, criticizing Romney for having made numerous claims last week that are untrue.

Eager to capitalize on his debate performance, Romney told a factory audience in Ohio during the day: “My whole passion is about helping the American people who are struggling right now … The president says he’s for the middle class. How have they done under his presidency? Not so well.”