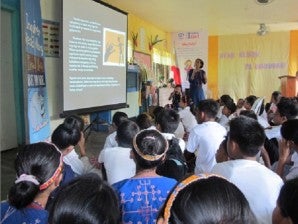 The program, which started implementation in June despite the lack of an enabling law, earned the approval of 25 legislators while three voted against the legislation that will add two more years to basic education.

K-12 is being lobbied by the Department of Education (DepEd) as a way to level the country’s education system with the rest of the world by implementing the 12-year basic education program.

And while some lawmakers like Eastern Samar Representative Ben Evardone were siding with the DepEd in seeing the K-12 program as a way to improving the country’s education system, others like Gabriela Partylist Representative Luzviminda Ilagan begged to differ.

In a statement, Ilagan said that the developments on the K-12 program would spell a “disaster” for the country’s education system, pointing out that the education allocation for next year was short by P42 billion to reach the needed P334 billion budget.

“The 2013 budget currently being deliberated allocates only P292B. This is P42B short of what the Department of Education needs to properly implement the K-12 program,” she said.

Kabataan Partylist Representative Raymond Palatino has stressed that the K-12 program, which adds a year each in elementary and high school levels, was not the solution to problems of the Philippine education system.

“Two of us opposed the passage. Representative Almario sent letter expressing her disapproval too. Once sent to the appropriations committee, I expect financial issues to be discussed,” said Palatino, adding that he would ask about the K-12 program’s content, rational and the “ill-preparedness of DepEd (in implementing it).”

“My fear is that it’s a solution that would aggravate the situation instead of curing the defects of the system. Why rush passage of a measure that could potentially damage the learning and future of an entire generation?” he asked.

Ilagan stressed that a higher budget was necessary to solve shortages in teachers, classrooms, tables and chairs, and other educational materials. She said that teachers also need to receive decent pay.

She, along with fellow legislators from partylists groups ACT Teachers, Kabataan, Bayan Muna and Anakpawis, vowed to question the bill once it reaches plenary deliberations.