NTF-Elcac gets P10 billion back as bicam restores fund cuts 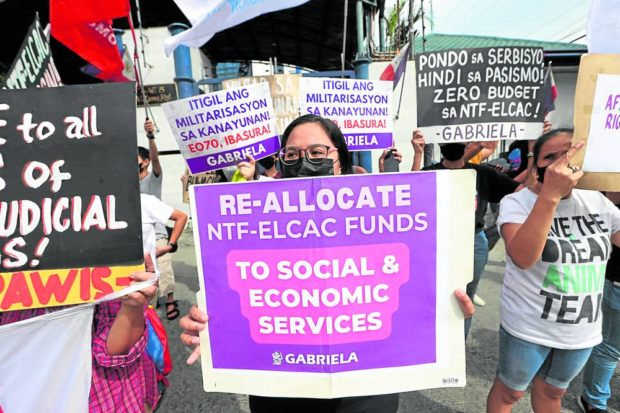 CALL FOR ABOLITION | Members of the rights alliance Karapatan stage a protest at the National Intelligence Coordinating Agency office in Quezon City on Monday, Dec. 5, 2022, on the fourth founding anniversary of the National Task Force to End Local Communist Armed Conflict, to reiterate their call for the abolition of the task force and for the government to channel its funds to social and economic projects that will benefit more Filipinos. (File photo by NIÑO JESUS ORBETA / Philippine Daily Inquirer)

MANILA, Philippines — Lawmakers on Monday restored the proposed P10-billion funding for the National Task Force to End Local Communist Armed Conflict (NTF-Elcac) in the reconciled version of the 2023 national budget.

Critics of the task force slammed the move, with a Makabayan lawmaker saying it “only shows the misprioritization of the Marcos administration.”

In an interview with reporters at the Manila Golf Club on Monday, Senate finance panel chair Sen. Sonny Angara and House appropriations committee chair Rep. Elizaldy Co both confirmed the restored allocation for the task force in the P5.268-trillion budget.

“We restored the original [amount],” Angara said, to which Co added: “We restored everything; that’s almost P10 billion.”

The senator added: “We cannot specifically say that [its budget had been] realigned from [that] agency, because what we do is we source and then we spread it where it’s needed. It’s fungible. You have a pool and it comes from different sources.”

The House of Representatives, in an earlier plenary session, had already slashed by half that proposed budget.

But last week, Co said his colleagues restored the P10 billion in the bicameral conference committee. The confidential funds for the Office of the Vice President and the Department of Education were also restored.

The restoration of NTF-Elcac’s budget comes on the heels of its fourth anniversary as a government agency.

The task force was created by then President Rodrigo Duterte’s Proclamation No. 70 on Dec. 4, 2018. It immediately drew controversy for Red-tagging not only critics of the government but also lawmakers, intellectuals, educators, community workers and even religious leaders.

Co urged the task force to hasten the implementation of its projects this year, as he noted that only 2 percent had been completed or were still ongoing, whereas 98 percent were either in the procurement stage or not even there.

He said the House on Monday agreed to restore the budget, but “we asked the agency to be more efficient.”

“We urged them to utilize the funds… We’re thinking of other ways on how to make it more efficient and more effective,” Co said.

But ACT Teachers Rep. France Castro, describing the task force’s projects as “antipeople,” urged her colleagues to defund the agency instead.

The restoration of NTF-Elcac’s budget “allows the excessive [amount] to fund antipeople policies and quickly shuts down demands of the people for salary increases, aid and adequate social services,” the House deputy minority leader said in a statement.

Rights group Karapatan echoed that view, as it reiterated anew its call to abolish the task force and reorient its funding toward social service programs.

“It is especially objectionable that after all the plenary debates and interpellations done in the open to scrutinize the NTF-Elcac’s budget, the bicameral conference committee suddenly backpedaled just on the say-so of House Speaker Martin Romualdez and Senior Deputy Majority Leader Sandro Marcos,” said Karapatan secretary general Cristina Palabay.

“An agency that has been running roughshod on the people’s civil and political rights and does not address the real roots of the armed conflict does not deserve a single centavo from the public coffers,” she added.