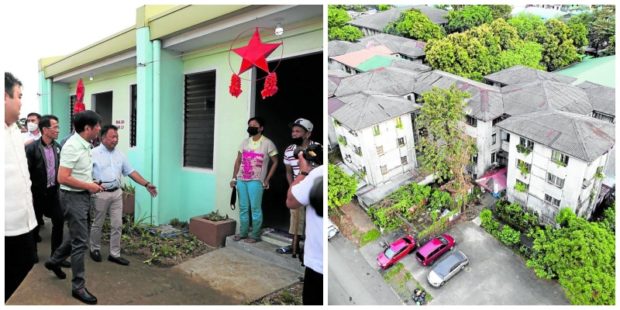 At a ceremonial turnover of house and lot units built by the National Housing Authority (NHA) in Naic, Cavite, the president said that medium-rise buildings might not be enough to solve the housing problem, especially in urban areas.

“If you recall the Bagong Lipunan Improvement of Sites and Services project, that began the mid-rise buildings of five to six stories. It was a good project and many were able to have their own homes,” he said, referring to the BLISS program of the Ministry of Human Settlements, which was headed by his mother, then first lady Imelda Marcos.

“Now because the situation is different, maybe we need to build it higher, maybe make it high rise. But this is still being studied on a [case-by-case] basis,” Marcos said.

“There’s no more land, especially in the urban areas. It’s difficult to find land nowadays. Maybe to make it more efficient, we will build mid-rise housing buildings,” he added.

During his campaign for the presidency, Marcos had raised the possibility of replicating the BLISS project implemented during his father’s term.

According to a post from Sen. Imee Marcos’ official Facebook page, around 230,000 low-cost housing units were built nationwide under the program. Data taken from the Official Gazette showed that among the first BLISS projects to be constructed were in Makati, Muntinlupa, Quezon City, Paco in Manila, Los Baños in Laguna, and San Jose in Nueva Ecija.

In his speech at the NHA turnover, the President said that socialized housing sites should be located near the workplaces of beneficiaries, and markets or shopping malls where they could buy whatever they need.

“The travel time in going to work should not take more than an hour. But because it’s too far at times, sometimes the feeling is it takes a year for one to get home,” he said in jest.

“So that’s our goal, to begin low-cost, socialized housing for our countrymen in need and [those] who do not have their own homes yet,” he added.

The NHA project in Naic will benefit around 30,000 families who will be given 30 years to complete the monthly amortizations with a minimum range of P600 to P800. The amount, however, will increase every five years.

NHA General Manager Joeben Tai said the housing units were “an early Christmas gift” and in line with the agency’s response to the “‘Build Better and More’ housing [program] to offer hope, proper housing and better lives for Filipino families.”

The Pag-Ibig loan fund will be available to home buyers, local government units (LGUs), developers, contractors and other qualified stakeholders, the Department of Human Settlements and Urban Development (DHSUD) said in a news release on Monday.

According to Acuzar, the allocation showed that the housing program, which aims to build six million affordable homes for Filipinos within six years, was “inclusive.”

“With this funding support, we are very optimistic [about] the rollout of Pambansang Pabahay. We are on the right track,” he said.

During a press briefing in October, Acuzar said that minimum wage earners and informal workers would be able to afford to own a house through the program since the prices would fit their monthly incomes.

According to him, the monthly payment would range from only P3,000 to P5,000, around the same amount they pay for rent.

Marilene Acosta, chief executive officer of the state-run Pag-Ibig Fund, said she hoped the partnership with DHSUD would show that local officials were not alone in addressing the housing problem in their areas.

“With our LGUs providing areas for housing development that have access to livelihood, education, and basic services, not only are we providing homes, we are [also] building productive communities,” she said.

More LGUs recently enlisted in the DHSUD’s housing project, including Mandaue City in Cebu, Tagbilaran City and Panglao in Bohol, and six towns from the provinces of Oriental and Occidental Mindoro.

“The LGUs play a vital role from the conceptualization of the project up to [the] identification of beneficiaries and more importantly, the sustainability of the program,” Acuzar said.