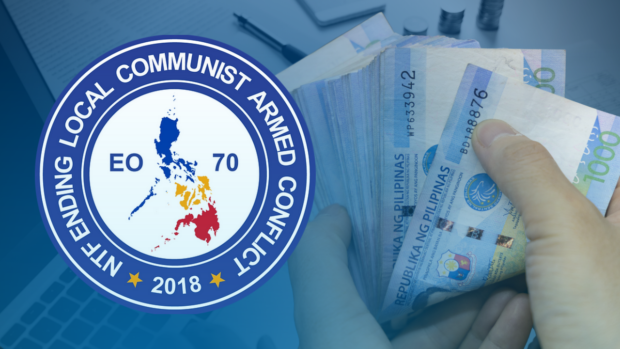 MANILA, Philippines—While proposals to allocate billions of pesos in funds to the National Task Force to End Local Communist Armed Conflict (NTF-Elcac) have always been met with strong opposition, it still manages to get a big share of the government’s budget.

The government’s weapon against a half-century old insurgency, the NTF-Elcac, which was created on Dec. 4, 2018 by then President Rodrigo Duterte’s Executive Order 70, first received P1.7 billion in 2020.

But in 2021, even with strong opposition from activists red-tagged by some of its officials, the budget of the task force grew to P19.2 billion and then P17.1 billion this year—resources intended for the Barangay Development Program (BDP) that rewards villages “cleared of communist rebels” with P20 million each.

This, even if the Commission on Audit (COA) has already flagged problems on the use of the agency’s funds, with the first one revealed last year—that in 2020, there were “deficiencies” in the implementation of programs, projects and activities of the task force’s six member-agencies.

According to COA in its 2020 Annual Financial Report, “incomplete documentation, low fund utilization and unutilized funds, unauthorized fund transfers and lack of guidelines on the use of funds” were observed in the implementation of the programs of these NTF-Elcac member-agencies:

The largest funding called out by COA was the amount transferred to the PNP as only P240.8 million of the P722.9 million allocated funds were released, leaving behind a balance of P482.1 million that was not obligated.

The deficiencies, COA said, cast doubt on the efficient use of public funds, stressing that the DILG likewise failed to utilize P8.735 million for activities intended for “strengthened communication strategies, capacity development and alliance-building with all sectors for local peace and development.” 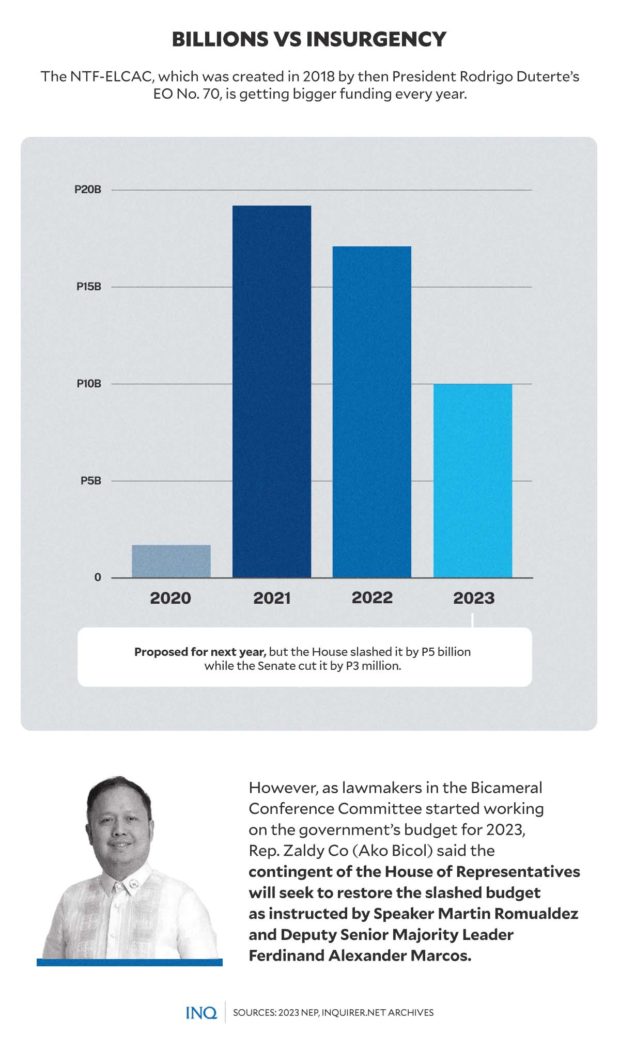 Last July, the COA said the NTF-Elcac failed to liquidate funds worth P33.4 million in 2021, pointing out that the Office of the President (OP), which was still led then by Duterte, transferred P52.99 million to the National Security Council (NSC).

However, out of the amount transferred by the OP to the NSC, which serves as national secretariat of NTF-Elcac, only P19.55 million was liquidated as of Dec. 31, 2021, leaving a balance of P33.45 million that was not yet liquidated.

This covered P18.4 million and P15 million that was transferred to the NSC in April and October last year.

Sen. Nancy Binay also stressed on Oct. 6 that out of the P16.4 billion released in 2021 for the BDP, P2.9 billion worth of projects are still ongoing, while completed undertakings only amount to P3.2 billion. She said the task force did not even use 50 percent of its funds.

Then on Nov. 30, Rep. Zaldy Co (Ako Bicol) asked the NTF-Elcac leadership to hasten the implementation of its projects, stressing that some of the agency’s projects remain lagging behind.

Co, who chairs the House committee on appropriations, said based on reports received by his office, only 2 percent of the task force’s 2022 projects have been completed or ongoing, while 98 percent was still in the pre-procurement or procurement stage.

According to Rep. France Castro (ACT Teachers), only 48 percent of BDP support projects was completed, while 50 percent is still ongoing. The remaining two percent is still in the procurement stage.

But despite all these, members of the Senate and the House of Representatives, who convened a bicameral conference committee to work on the government’s 2023 budget, have been told to restore the funds slashed from the NTF-Elcac’s proposed budget for next year.

To recall, the agency, which had been controversial for its officials relentlessly red-tagging activists, was set to receive P10 billion, as stated in the 2023 National Expenditure Program (NEP).

However, the House, which approved its version of the proposed 2023 General Appropriations Act last Sept. 28, slashed NTF-Elcac funds by P5 billion, while the Senate, which had Binay and Sen. Sonny Angara questioning the Department of Budget and Management about the proposed NTF-Elcac budget, slashed it by P3 billion. 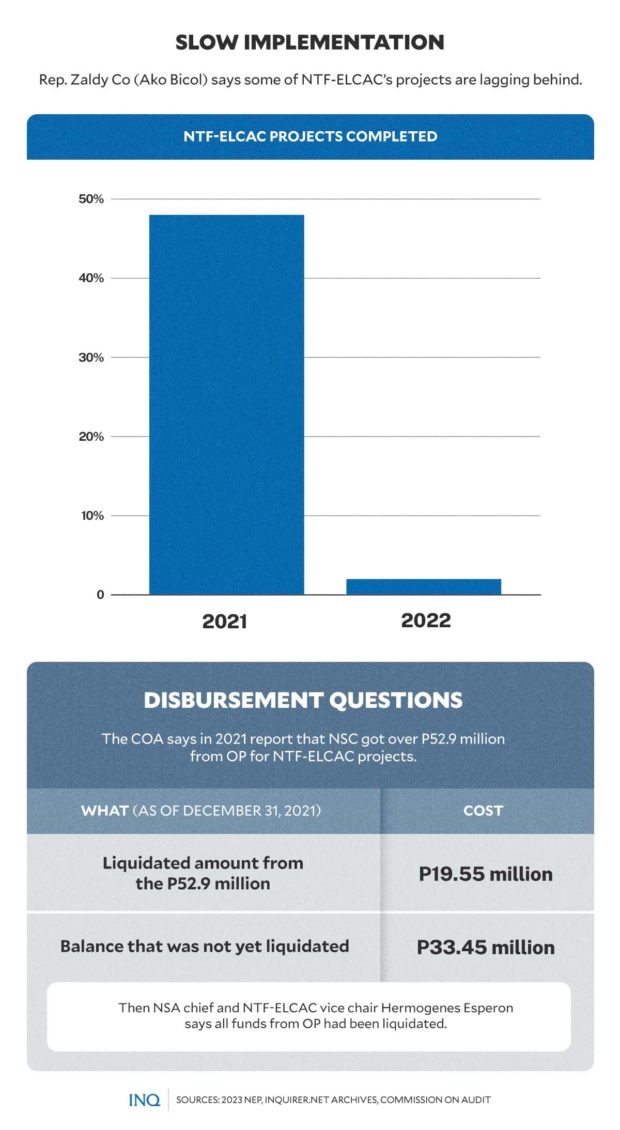 Rep. Arlene Brosas (Gabriela), who is one of the three Makabayan lawmakers in the House, said while they welcomed the cut in the agency’s budget, “we still want this defunded and have the fund realigned to social service programs.”

According to Castro last Oct. 10, only three of the eight amendments they proposed had been accommodated in the House move to realign P77.5 billion to critical government programs, especially those concerning health, education, and transportation.

But this “initial win” may be short-lived as Co said Speaker Martin Romualdez and Deputy Senior Majority Leader Ferdinand Alexander Marcos gave instructions to reinstate what was cut from the proposed budget of NTF-Elcac.

Co stressed that “Congress recognizes the important role the NTF-Elcac plays to help end the country’s decades-long insurgency. Thus, we will convince our Senate counterparts in the bicameral conference committee to restore the agency’s proposed budget.”

“After all, this is one of the key priorities of President Ferdinand R. Marcos, Jr. which was clearly outlined in the National Expenditure Program the administration sent to Congress,” he said.

This move, however, triggered criticisms, especially from lawmakers repeatedly tagged as members of the Communist Party of the Philippines by former officials of the NTF-Elcac, who stressed that “if the budget is restored, it [will seem] that Congress is rewarding incompetence and red-tagging.”

“The budget was already deliberated and debated upon by the plenary, and now they will just set it aside? What’s the purpose of the debate and interpellation? Is there no democracy in Congress? Will the plans of those at the top always prevail?”

Looking back, the NTF-Elcac was initially set to receive P28.1 billion for this year, as reflected in the 2022 NEP, but Angara had said the Senate would cut the controversial agency’s proposed budget by P24 billion, leaving it with only P4 billion for 2022.

But in the Senate’s final version of the 2022 General Appropriations Act, funding for the NTF-Elcac was increased to P10.8 billion—P10 billion of which is for the agency’s BDP.

Then as the Senate and House contingents convened to finalize the 2023 budget, there was agreement to set the anti-insurgency task force’s fund at P17.1 billion, or an increase of over P6 billion from the amount initially approved by the Senate on Dec. 1, 2021.

Out of the P17.1 billion, which is roughly the same level it received last year, P16.1 billion will be used for the BDP, while the rest will be spread out to member-agencies for related programs.

Angara said to increase the NTF-Elcac budget for 2022 to P17.1 billion, the bicameral conference committee made cuts to the budget of some government offices, including the Department of Transportation. He stressed that appropriations were also increased for the Department of Health.

Rep. Eric Yap, who was then the chair of the House committee on appropriations, stressed that the Senate and House came up with a compromise, saying that P17 billion was enough.

Give it to poor instead

As Castro stated, Congress should instead realign the P10 billion for the agency to fund the P10,000 one-time cash assistance to poor families struggling with the steep price hikes of basic commodities.

Castro pointed out that “if we are able to realign the P10-billion for ayuda, 1 million families will be able to get P10,000, and around five million Filipinos will benefit from it.”

“I hope that the House leadership would reconsider so that people will see that Congress would help them get aid rather than waste their hard earned money on red-taggers,” Castro said.

According to the Bangko Sentral ng Pilipinas on Nov. 29, inflation could hit its peak either in November or December, saying that higher prices of electricity, liquified petroleum gas, and some agricultural items are expected to push last month’s inflation to an average of 7.4 percent to 8.2 percent.