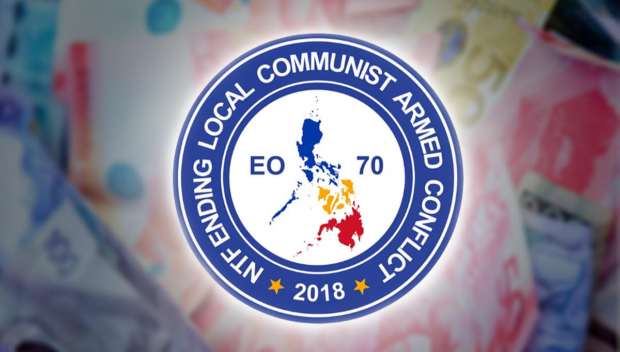 MANILA, Philippines — The Commission on Audit (COA) has found several deficiencies in the funds allocated to the National Task Force to End Local Communist Armed Conflict (NTF-Elcac), including disbursements to agencies in the cluster that remain unused.

In its 2020 Annual Financial Report released December 17, state auditors discovered deficiencies in the funds downloaded to six member-agencies of the NTF-Elcac, namely:

The deficiencies, COA said, cast doubt on whether the funds were utilized properly.

“Deficiencies were noted in the implementation of programs/projects and activities of six member agencies of the NTF-ELCAC such as incomplete documentation, low fund utilization/ unutilized funds, unauthorized fund transfers, and lack of guidelines on the use of such funds casting doubt on the efficient use of public funds,” COA said.

The largest NTF-Elcac funding called out by COA was the amount transferred to the Philippine National Police, in which only P240.8 million of the P722.9 million appropriated funds were released — leaving behind a P482.1 million unobligated balance.

“In PRO BAR (Police Regional Office-Bangsamoro Autonomous Region), no Funds were obligated due to non-preparation of project activities or estimated expenses indicating project objective and expected output as required in paragraph 3.1.1 of COA Circular No. 2012-001 dated June 14, 2012, caused by time constraint and late release of funds,” COA said.

“The SARO (Special Allotment Release Order) was released on the latter part of the year,” it added.

For NTF-Elcac’s fund transferred to DILG, COA said that 10.22 percent of the P85.44 million allotment for the C4PEACE project — or P8.735 million — were not obligated as the department’s five targeted related activities under “Strengthened communication strategies, capacity development and alliance-building with all sector for local peace and development” were not implemented.

This was also due to “one activity under the Program Oversight” being partially implemented only, COA added.

“Thus, the required outputs on the production of Audio-Visual Presentation on ELCAC in times of COVID-19 and localization of Information, Education and Communication materials to be developed in eight versions were not carried out/attained during the year,” the audit agency noted.

Other NTF-Elcac allocations to other government agencies that COA said contained deficiencies include:

COA urged the agencies to comply with pertinent procurement laws and submit documents required to clear the deficiencies to the Philippine Government Electronic Procurement System (PhilGEPS).

“Require the BAC (Bids and Awards Committee) Secretariat to comply with the required posting of the RFQ (request for quotation), NOA (notice of award), contract or PO (purchase order), including NTP (notice to proceed), in the PhilGEPS and of the concerned procuring entity’s websites pursuant to the pertinent provisions of the IRR of R.A. 9184,” COA said regarding deficiencies in PNP’s NTF-ELCAC funds.

“Require the PRO BAR Management to prepare project activities or estimated expenses indicating project objective and expected output and ensure to utilize the funds in accordance with its intended purpose,” it added.

In 2020, NTF-Elcac — an agency meant to fight the communist insurgency in the countryside — got a P19.2 billion budget from Congress. However, several lawmakers sought a probe on the funding, as they claim that the task force is only being used to harass critics and activists that speak against government policies.

During the deliberations of the 2022 budget, NTF-Elcac’s proposed budget was reduced to just P4 billion — from the proposed P28 billion after it initially failed to explain where its previous appropriations went. In a document presented to the Senate during the budget briefing, it was revealed that only 26 of the 2,318 NTF-Elcac projects for 2021 have been implemented.

But in the final version of the budget sent to President Rodrigo Duterte, NTF-Elcac still got a P17.1-billion budget for 2022, with Congress apparently heeding the call of the country’s security cluster to restore the funds so that the barangay development project would not be interrupted.