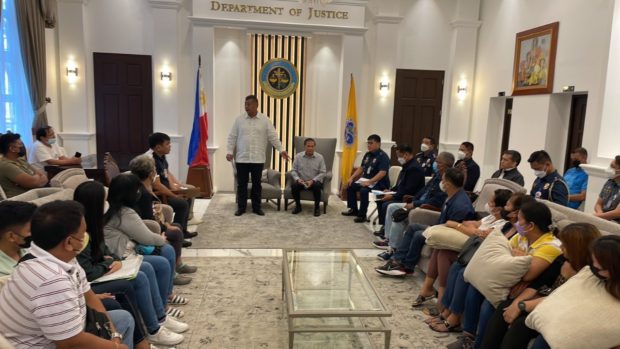 Justice Secretary Jesus Crispin Remulla, representatives from DILG, NBI and PNP met with the families of the missing “sabungeros” on Friday. (Photo from DOJ-PIO)

Thirty-four cockfighting enthusiasts have been missing for almost a year. Authorities are investigating the disappearance.

On Friday, Remulla met with the families of the missing “sabungeros” where they agreed to have regular dialogue for the case and investigation updates.

Also present during the meeting are representatives from the Philippine National Police (PNP), the National Bureau of Investigation (NBI), and the Department of Interior and Local Government (DILG).

On Thursday, the PNP, through its Criminal Investigation and Detection Group (CIDG), filed kidnapping complaints before the DOJ against two suspects for the missing sabungeros in Laguna.

Last October, a complaint was filed by the NBI against 11 police officers for missing “sabungeros” in Cavite.

The families urged the DOJ to resolve the complaints filed by the NBI and police.

But Remulla said: “I cannot promise anything I cannot control. But I can urge them to resolve it in the soonest possible time.”

Remulla said four other cases have to be filed.

“There are leads in other cases that are still being followed up. Bilib din ako, matiyaga din talaga ang CIDG. [I admire the CIDG for their diligence]. They are getting a lot of evidence, given the circumstances na mahirap to [this (case) is difficult]. Meron ng mga leads [There are already leads],” he said.

“Ang role ko dito [My role here] is to coordinate everything. We are trying to put everybody together for a clear dialogue, clear direction,” Remulla said.