Cayetano to bicam: Ensure 2023 nat’l budget leaves no Filipino behind 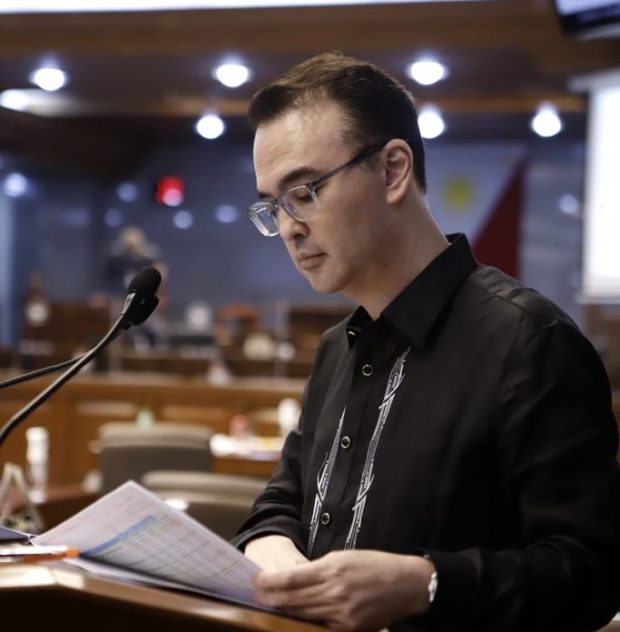 With the pandemic ravaging communities nationwide, Senator Alan Peter Cayetano on Friday issued an urgent call for a 2023 national budget that distributes resources fairly and equally across the country — so that no Filipino is left behind in the economic recovery.

In a letter to the bicameral conference committee dated December 2, Cayetano said he wants to see more opportunities for growth and advancement spread throughout the regions and not just concentrated within urban centers.

“Our desire is simple — to see the entire nation and not just our urban centers grow. We want an equitable sharing of government resources, and the opportunities for growth and advancement that come with it. We want to bring the benefits of a well-planned and well-executed budget to every purok, barangay, municipality, city, and province. No one must be left behind simply because of the circumstances of his birth — walang iwanan maski saan o sino ka man,” he wrote.

“I would like to submit to the bicameral conference committee the following points to consider, with the goal of ensuring the equitable distribution of government resources nationwide so that no Filipino is left behind in our continuing efforts to rise from generations of poverty and inequality,” he added.

Noting down his requests, Cayetano said the agriculture, infrastructure, health, and education budgets should be aligned to address the Filipinos’ biggest socio-economic problems, such as the lack of equal economic opportunities, insufficient wages, and the high prices of necessities like food and medical care.

READ: Cayetano: Use bicam to align 2023 budget with admin’s priorities

Cayetano’s first request to the bicam is to make the agriculture budget responsive to the needs of farmers and fisherfolk by providing more aid in high prices of fertilizer and feeds, expansion of farm-to-market road networks, improved irrigation, and the rehabilitation/modernization of fishponds and fisheries to support systems to maximize the archipelagic nature of the country.

“By strengthening support to the agriculture sectors through assistance that will lower input costs and provide better post-harvest facilities, the government can boost local food production and eventually bring down the cost of food prices for the Filipino consumer,” he said.

In terms of infrastructure, Cayetano urged the body to realign the Department of Public Works and Highways’ (DPWH) budget so that allocation to new roads and bridges will be prioritized over maintenance and flood management projects.

“This (more budget for maintenance) speaks volumes, not only to the priorities of the department but also to the quality of work that has been done in our public works through the years. Furthermore, flood management projects were increased by the House from the P109.79 Billion submitted in the NEP by this administration to P166 Billion. This gives it a higher allocation than the construction and widening of roads, and the construction, retrofitting, and replacement of bridges,” he said.

To avoid confusion, he proposed changing the project nomenclature to keep it away from misuse and abuse of funds.

“May I suggest that we instead change the nomenclature to “Water Systems or Rural Water Works” so that it be made clearer and more neutral so that we do not unnecessarily tie the hands of the DPWH and all other implementing agencies to a specific, untested, and vague program,” he suggested.

Cayetano also proposed a direct and hassle-free distribution of aid or ayuda to millions of beneficiaries by asking government agencies to start developing and using mobile applications.

“As admitted by the administration during plenary debates on the budget and in other instances, the government has allocated more than P200 billion of ayuda in terms of cash transfers and subsidy programs under the 2023 proposed national budget,” he said.

“As this is already the case, why not make the distribution easier either by giving cash assistance to every Filipino, or by developing and using mobile applications/apps for easier distribution of ayuda? This will guarantee all Filipino families who need assistance will get it without the attendant red tape and administrative costs.” the senator, a prominent proponent of ayuda distribution to Filipino families, added.

For the health sector’s budget, Cayetano sought to draft a development plan the government could implement in the next five years.

“Let’s start by having a five-year plan, one that will see to it that in five years: Every barangay will have its own barangay health center with proper equipment and facilities to provide primary health care to their residents; Our biggest hospitals will be rehabilitated in terms of facilities and would have a sufficient number of well-compensated and trained health service professionals; and there will be little to no out-of-pocket expenses for basic medical care and medicine, especially for the poor,” he explained.

The independent senator said the government should also consider putting up floating hospitals as the administration draws up a plan to replicate specialty hospitals across the country.

“We must give the Philippine Coast Guard and the Philippine Navy the necessary financial resources to buy and equip floating hospitals. The budget for this was previously supposed to be included in the 2021 General Appropriations Bill during the Bicam, but was taken out at the last minute. I am praying that this time we can do the opposite and put it in now,” Cayetano, who authored the Floating Hospitals Act (Senate Bill No. 305), said.

Lamenting the lackluster implementation of the K-to-12 Education Program, Cayetano said the government must now consider fully funding the program or suspending its implementation.

“As to education, with the dismal state of our basic education, the choice is clear: either fully fund K-to-12 so that students who graduate from the program are sufficiently equipped for work without the necessity of going to college, or we return to K-to-10 and spend the amounts we save from removing two grade levels to improve our basic education,” he said.

Cayetano wrapped up his letter with a word of caution on the presence of double appropriations and lump sum entries in the National Expenditure Program and the General Appropriations Bill, citing that these are contrary to what the body is trying to achieve.

“It is also unconstitutional. I am confident the bicam will remedy this for the final 2023 GAA,” he said.

He urged the bicameral conference committee to work hard together for a 2023 national budget that truly responds to the needs of the people.

“There is much work to be done; let us make sure our people’s welfare is our top priority. Again, I congratulate everyone for their hard work in putting this important piece of legislation together,” he said.

“It is my sincerest hope that our recommendations and collective wishing are not taken as criticism towards the executive branch, but rather a joining of our efforts to come up with the best possible budget for 2023 and setting up a five-year comprehensive plan,” he added.