Cayetano: Use bicam to align 2023 budget with admin’s priorities 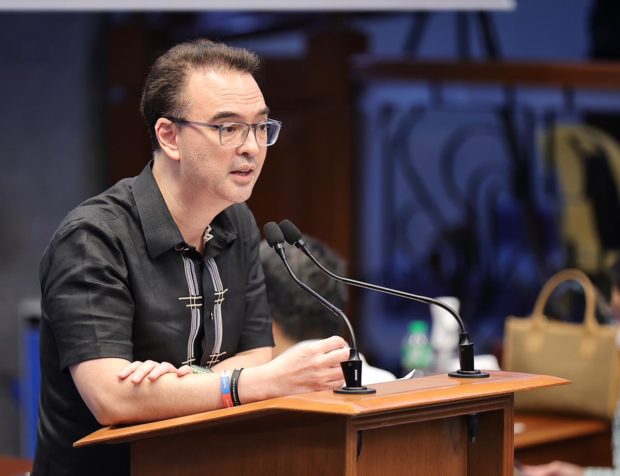 MANILA, Philippines — Senator Alan Peter Cayetano has congratulated his colleagues in the Senate for approving the P5.268 trillion national budget for 2023.

He said the bicameral conference committee meetings would give both chambers of Congress a chance to come up with a final budget that genuinely reflects the administration’s priorities.

“However, given the economic realities, including the rise in prices of basic goods as well as the limited fiscal space, we need to go into the bicam conference with a mindset of really aligning the 2023 budget with the priorities of the Marcos Administration as laid it out by the President in his SONA: economic recovery and food security,” he added.

The senator said the bicam meetings, which kicked off Friday, will also allow him to push for changes that Senators had proposed or brought up during the Plenary budget debates.

For one, Cayetano said the P40.842 billion budget for irrigation falls short of the P50 billion that the National Irrigation Administration (NIA) had requested. He also pointed out that the budget for small-scale irrigation fell from P1.109 billion in 2022 to only P991.11 million in the 2023 budget.

He also said that while the budget for farm-to-market roads increased from P7.485 billion in 2022 to 13.14 billion in 2023, the program still falls short compared to what the country’s Asian neighbors are allotting for it.

“Tayo sa Pilipinas nakakumpleto pa lang ng 2,712 kilometers ng farm-to-market roads samantalang ang Thailand ay may 47,916 kilometers at ang Vietnam ay may 175,000 kilometers. Is it any wonder that we have to import rice from these two countries? Their farmers get far more support from their governments,” he said.

Cayetano likewise said he will push for better use of the infrastructure budget for “new road networks, roads and bridges, as well as community centers and parks.”

He had earlier criticized the infrastructure programs under the Department of Public Works and Highways (DPWH), saying there is a bigger allocation for maintenance than new projects in its budget.

“Kung ia-add natin ang budget for maintenance and rehabilitation, mahigit P200 billion ito, which is almost one third of the DPHW’s P737 billion budget. This is not a ‘Build Better More’ budget but a ‘Maintenance Pa More’ budget,” he said.

Cayetano urged both Houses to work together to fine-tune the budget and align it with the needed priorities, notably agriculture and infrastructure that will “offer good prices for farmers and better employment benefits for our workers.”

The bicam meetings for the 2023 GAB were expected to thresh out the differences between the Senate and House of Representatives versions of the budget measure. Cayetano is one of those assigned as members of the Senate bicameral panel, along with Senators Sonny Angara, Pia Cayetano, Loren Legarda, Imee Marcos, Cynthia Villar, Bato Dela Rosa, Win Gatchalian, Bong Go, Risa Hontiveros, Nancy Binay, Grace Poe, Francis Tolentino, Mark Villar, JV Ejercito, Chiz Escudero, and Jinggoy Estrada.

“This is democracy at work. Masaya tayo sa Senate version ng budget, pero kailangan ding i-point out na may mga portions na kailangan ng improvement. We are not giving up on these, and we will continue advocating for them in the bicam,” Cayetano said.

“Rest assured that we will work equally hard – if not harder – during the bicam to make sure the people get the budget they deserve,” he added.