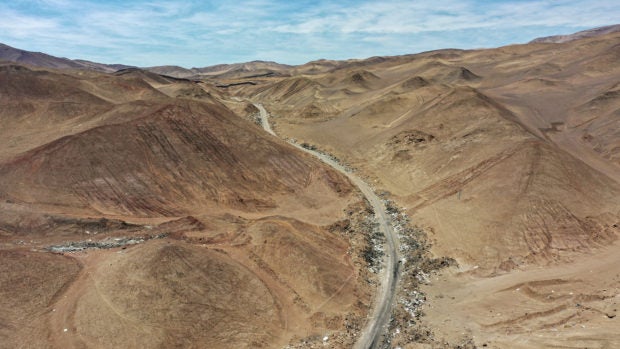 Aerial view of rubbish on the side of a rural road in the Atacama Desert, outside the commune of Alto Hospicio, Iquique, Chile, on November 11, 2022. – Hills of clothes from the United States, Asia and Europe; used cars from Japan or Korea and thousands of tires contaminate extensive areas of the immense but vulnerable Atacama desert in northern Chile, which has become the planet’s “backyard”. (Photo by MARTIN BERNETTI / AFP)

Iquique, Chile — It may be one of the driest places on Earth – a brutal, alien landscape where life seems impossible.

But Chile’s massive Atacama desert is a unique and fragile ecosystem that experts said is being threatened by piles of trash dumped there from around the world.

Mountains of discarded clothing, a graveyard of shoes, and rows upon rows of scrapped tires and cars blight at least three regions of the desert in northern Chile.

“We are no longer just the local backyard, but rather the world’s backyard, which is worse,” Patricio Ferreira, mayor of the desert town of Alto Hospicio, told AFP.

The Atacama, with its striking otherworldly beauty and expansive salt flats, has also been transformed by intensive mining for copper and lithium.

Carmen Serrano, head of the Endemic Roots environmental NGO, said that most people see the Atacama as nothing more than “bare hills” where they can “extract resources or fill their pockets.”

Chile has long been a hub for secondhand and unsold clothing from Europe, Asia, and the United States, which is either sold on throughout Latin America, or ends up in rubbish dumps in the desert.

Full of chemicals and taking up to 200 years to biodegrade, activists say the clothing pollutes the soil, air and underground water.

The heaps of hand-me-downs are sometimes even set alight.

“The material is highly flammable. The fires are toxic,” said lawyer and activist Paulin Silva, 34, who has filed a complaint at the country’s environmental court over the damage caused by the mountains of trash and clothing.

“It seems to me we need to find those responsible,” she said, standing amid the discarded items which she said were “dangerous, an environmental risk, a danger to people’s health.”

Used cars also flood into the country from the free trade zone. Many are exported to Peru, Bolivia or Paraguay, while others end up dumped in graveyards kilometers wide in the surrounding desert.

Piles of abandoned tires are also scattered across the desert.

The mayor Ferreira lamented a “lack of global awareness, a lack of ethical responsibility and environmental protection” from “the unscrupulous of the world.”

“We feel abandoned. We feel that our land has been sacrificed.” 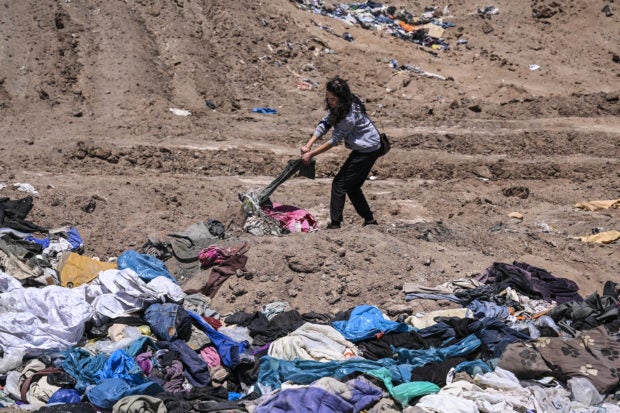 Lawyer Paulina Silva shows clothes dumped in the desert, in La Pampa sector of Alto Hospicio, about 10 km east of the city of Iquique, Chile, on November 11, 2022. – Hills of clothes from the United States, Asia and Europe; used cars from Japan or Korea and thousands of tires contaminate extensive areas of the immense but vulnerable Atacama desert in northern Chile, which has become the planet’s “backyard”. (Photo by MARTIN BERNETTI / AFP)

For more than eight million years, the 100,000 square kilometer expanse of the Atacama has been the most arid desert in the world.

Rain is rare, and in some parts, non-existent.

The driest part is the Yungay district in the city of Antofagasta. Here, scientists have found extreme forms of life, microorganisms that have adapted to a practically waterless world, high levels of solar radiation, and barely any nutrients.

Scientists believe these microorganisms may harbor secrets to evolution and survival on Earth and other planets.

NASA considers the Yungay district to be Earth’s most similar landscape to Mars, and uses it to test its robotic vehicles.

While it doesn’t receive much rain, large banks of fog roll across the desert, allowing some plants – and some of the world’s hardiest lichens, fungi, and algae – to grow.

Scores of brightly colored wildflower species bloom when it gets above average rain in a spectacular display that happens every five to seven years, most recently in 2021.

It is an ecosystem that is “very fragile, because any change or decrease in the pattern of precipitation and fog has immediate consequences for the species that live there,” said Pablo Guerrero, a researcher at the Institute of Ecology and Biodiversity and expert in desert cactus.

“There are cactus species which are considered extinct” as a result of pollution, climate change, and human settlement.

“Unfortunately, it is something we are seeing on a massive scale, with systematic deterioration in recent years.”