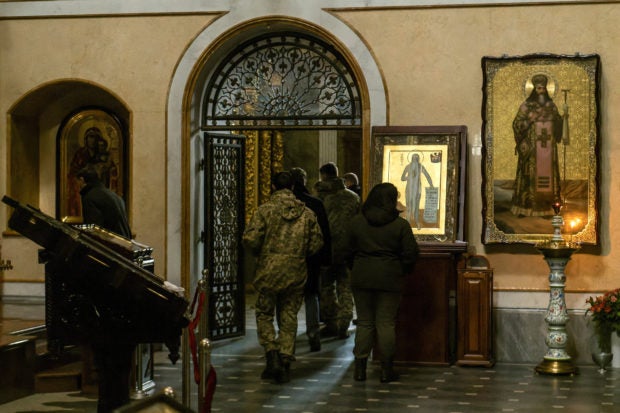 KYIV — The Ukrainian government will draw up a law banning churches affiliated with Russia under moves described by President Volodymyr Zelensky as necessary to prevent Moscow being able to “weaken Ukraine from within.”

The National Security and Defence Council of Ukraine, which groups top security, military and political figures, told the government to draft the law following a series of raids on parishes that Kyiv says could be taking orders from Moscow.

The security council also ordered investigations into suspected “subversive activities of Russian special services in the religious environment of Ukraine” and called for sanctions against unspecified individuals.

Further searches of church premises were taking place on Friday. The Security Service of Ukraine (SBU) it said was searching at least five parishes belonging to a branch of the Ukrainian Orthodox Church which until May was subordinated to the Russian Orthodox Church.

The agency also announced on Friday that it had served a notice of suspicion to a former diocese head in central Ukraine for allegedly coordinating a pro-Moscow information campaign with the head of the Russian Orthodox Church.

The branch has condemned Russia’s invasion of Ukraine but many Ukrainians fear it could be a source of Russian influence in the country.

“We have to create conditions where no actors dependent on the aggressor state (Russia) will have an opportunity to manipulate Ukrainians and weaken Ukraine from within,” Zelensky said in his nightly address to the nation on Thursday.

“We will never allow anyone to build an empire inside the Ukrainian soul.”

A spokesman for the church, Metropolitan Kliment, told Reuters on Friday that his organization “has always acted within the framework of Ukrainian law”.

“Therefore, the state of Ukraine does not have any legal grounds to put pressure on or repress our believers,” he said.

Orthodox Christians make up the majority of Ukraine’s 43 million people and competition has been fierce since the collapse of Soviet rule between the Moscow-linked church and an independent Ukrainian church proclaimed soon after independence.

A July survey by the Kyiv International Institute of Sociology of found that only 4% of Ukrainians affiliated themselves with the Moscow-subordinated church.

The Orthodox Church in Russia has lavishly backed the Kremlin’s nine-month-old invasion of Ukraine.

Zelensky also said officials would look into whether the formerly Moscow-linked branch of the church was entitled to operate at one of Ukraine’s most hallowed sites – the Pechersk Lavra complex in Kyiv, which was raided by the SBU on Nov. 22.

Russia’s war on Ukraine latest news: Putin has no regrets