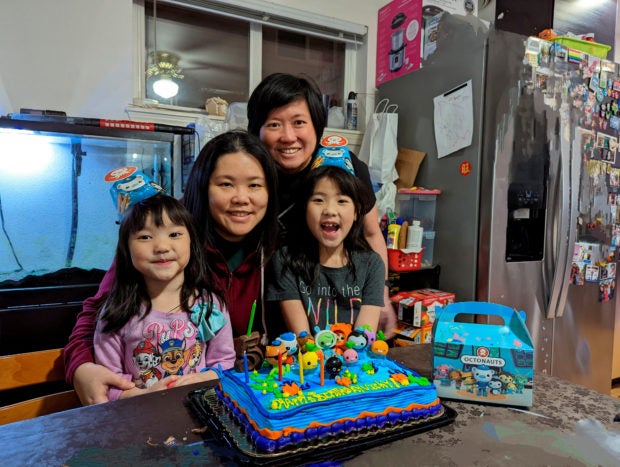 Same-sex parents Olivia (2nd L) and Irene and their daughters Zoey (R), 9, and Vicky, 5, pose for photos during Vicky’s birthday celebrations in their home in Seattle, US January 2022. Olivia and Irene Chiong/Handout via REUTERS

SINGAPORE — Olivia Chiong and her wife feel like the Singapore government has made clear to them and their two children that they don’t belong in the city-state.

So this week’s vote by Singapore’s parliament to decriminalize gay sex changed nothing about the family’s painful decision to leave rather than see their children denied schooling – because their legal status remains the same.

Chiong says she was given no reason for the government rejecting her daughter’s residency, though it likely did not help that she had to apply as a single, foreign mother because her marriage was not officially recognized.

Without legal residency or a student pass, which may be denied, even private Singaporean schools cannot enroll a child.

A wealthy society straddling traditional and progressive values, Singapore this week decriminalized sex between men, and at the same time entrenched the definition of marriage as between a man and a woman, and of family as mother, father, and children.

“We will try and maintain a balance…to uphold a stable society with traditional, heterosexual family values, but with space for homosexuals to live their lives and contribute to society,” Home Affairs Minister K. Shanmugam told parliament.

The move maintains an unfavorable status quo for children of couples such as Chiong and her wife, who have since moved to the United States.

While the government’s decision to repeal the colonial-era sodomy law was cheered as a symbolic victory for the gay community, many worry LGBT families will continue to suffer under public policies that favour heterosexual marriages and families.

For Chiong, who married her Singaporean wife in the United States, the repeal is “one step forward and 10 steps back”.

“What is the government trying to do? Are they trying to tell you, ‘Send your child away’?” the 42-year-old said in a telephone interview from Seattle, where she now lives. 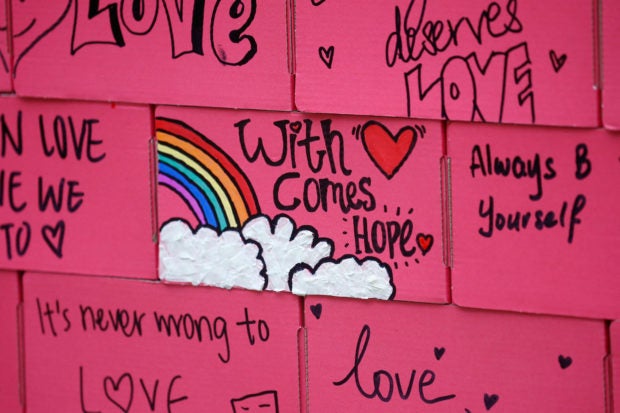 FILE PHOTO: A message of hope is seen at Pink Dot, an annual event organized in support of the LGBT community, at the Speakers’ Corner in Hong Lim Park in Singapore, June 29, 2019. REUTERS/Feline Lim

In Singapore, grassroots attitudes towards the LGBT community have become more liberal in recent years, especially among the young.

Among Singaporeans aged 18-25, about 42% accepted same-sex marriage in 2018, up from 17% five years prior, according to a Institute of Policy Studies survey.

But laws are slower to change.

The government maintains its policy “is and has always been to uphold heterosexual marriage and promote the formation of families within such marriages”.

Prime Minister-in-waiting Lawrence Wong has said these policies will not change on his watch.

Activists say national policies on a range of issues including adoption, surrogacy, education, media and housing are such that children of LGBT parents are effectively penalised for being part of non-traditional families.

Ivan Cheong, a family lawyer with Withers KhattarWong who takes LGBT families as clients, said children of anyone resident in the city-state should at least be entitled to enrollment “in private schools and at rates which are not subsidized” as many parents were willing to pay tuition fees upwards of S$20,000 ($14,530) per year.

An alliance of more than 80 Singaporean churches has decried repealing the gay sex ban as an “extremely regrettable decision” that “celebrates homosexuality”.

Lawmakers this week amended the constitution so that only parliament, dominated by the ruling party, can define marriages.

Such decisions should not be led by the courts, government ministers said, citing the Indian Supreme Court’s decision in August to widen the definition of familial relationships.

However, the changes do not close the door to a future parliament widening the definition of marriage.

LGBT families in Singapore now worry that further change will not come in time for them.

One single, gay Singaporean man, who declined to be named because of the sensitivity of the issue, said he has to leave the country every three months to renew the tourist visa of his baby, born overseas through surrogacy.

While he is hopeful the child can gain citizenship in time for school, he is also working on a “plan B” to leave his home country.

A British couple, permanent residents who spent a decade in Singapore, were forced to return to Britain in mid-2020 after their two sons, born of surrogacy, were denied residency and student visas.

One of the fathers, who also declined to be named, said he knows at least a dozen families facing the same hurdles, many with at least one Singaporean parent.

“You do that to your own citizens and that is cruel,” he said. “You’re punishing the child.”

The government did not respond to Reuters’ questions about the rights of LGBT families and their children’s residency and access to education.

Chiong, now a product manager in Seattle, says her family has no plans to return to Singapore.

“In the U.S., you don’t even know who in the school or in the class is American or not. They educate every child. They treat every child the same,” she said.