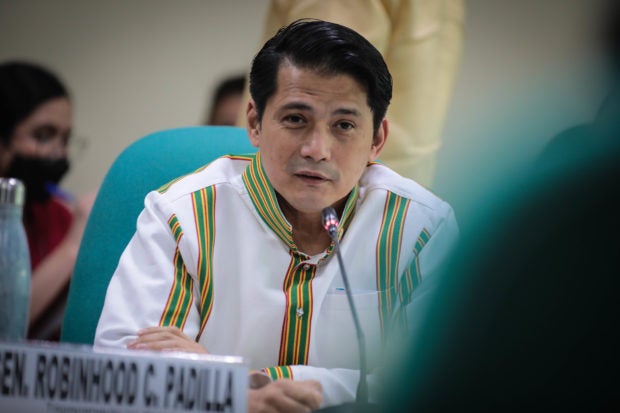 MANILA,  Philippines — Decriminalizing the use of illegal drugs does not mean legalizing prohibited drugs and crimes related to them, according to Senator Robin Padilla.

Padilla clarified he and Senator  Ronald “Bato” Dela Rosa are only proposing decriminalizing drug use to decongest jails in the country and save small-time drug users by rehabilitating them instead of putting them in prisons.

It was Dela Rosa who filed a bill seeking to decriminalize drug use, while Padilla openly expressed his support for the measure.

(We are proposing decriminalizing it because many  of those in jails are  poor.)

(When we say poor,  they were caught with P1, P2  [worth of illegal drugs], one joint, two, and three. They are the ones in jails.)

According to  Padilla,  decriminalization should be based on the amount of illegal drugs in one’s possession.

(For instance, one or two pesos or three joints. Why do we need to jail them?)

(Senator Bato and I are not saying that we are legalizing it. That’s foolish. We can never legalize drugs. We are saying that those caught with a small amount should not be sent directly to prison.)

Unlike critics of the proposal, Padilla said he  and Dela  Rosa have first-hand knowledge of what is happening inside detention cells.

Padilla spent more than two years in jail after being convicted of illegally possessing firearms in 1994. He was pardoned by former President Fidel Ramos and released in 1997.

Dela Rosa, meanwhile, headed the  Bureau of Corrections after his stint as head of the  Philippine National Police.

(We want to clarify that drug-related crimes will not be decriminalized. That’s a big lie. What we are saying is the possession of a small quantity of (drugs])

Padilla said he decided to speak up and defend  Dela Rosa because he could not sit idly while the latter was being criticized over his bill.

His only request to colleagues who may disagree with the proposal: “Magpagawa kayo ng kulungan.”