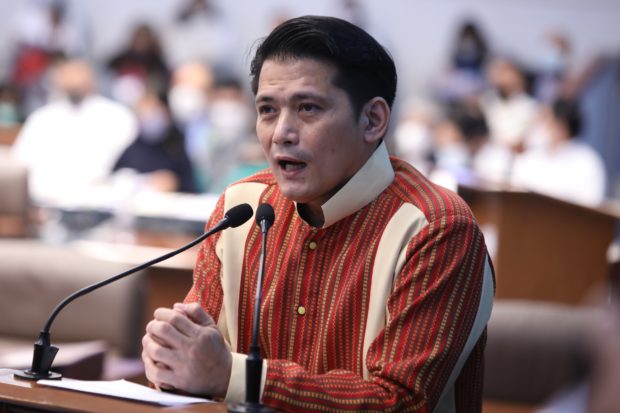 MANILA, Philippines — Senator Robin Padilla is still gung-ho about legalizing drug use in the country, even after hearing all the opposing arguments.

He said the law is always open to change if it doesn’t work.

The Senate Committee on Public Order and Dangerous Drugs heard about drug abuse treatment and rehabilitation centers, and Senator Ronald Dela Rosa wondered if the country could “afford an experiment” to determine if decriminalizing drug use would be beneficial or not.

(We can always amend the law. Wow, that’s English. We need to try. We also need to hear the medical point of view because we’ve already acted from the law enforcement point of view. There’s nothing wrong with that. If it’s not effective, then let’s change it next year. Let’s remove that law.)

Earlier in the hearing, Dela Rosa said that one reason rehabilitation centers’ utilization remains low was that drug users are sent to prison instead of committing them in these centers.

He also cited the case of the Mega Drug Abuse Treatment and Rehabilitation Center in Nueva Ecija province which is inaccessible to people from faraway areas. Thus, he noted, the construction of a rehabilitation facility is being eyed in every region.

(Secondly, decriminalizing drug use instead of imprisonment. Automatically put them in rehab, and those centers will really be filled.)

Padilla then argued that drug users, especially those who deal on a small scale, are merely offenders and should be dealt with differently than violent criminals.

(Separate the drug pushers from the dealers. Let’s separate the thieves from those victims. That’s the purpose of this proposed measure. We need an explicit law separating small-time and big-time drug users in the Philippines. We need the law to emphasize who the government should help and who should be sent to jail.)

As expected, the proposal to decriminalize drug use was met with opposition during the upper chamber’s hearing.

Dela Rosa acknowledged the points raised by the Dangerous Drug Board (DDB) in its submitted position paper.

(What the DDB said is right – this may become the people’s standard, and they might say, ‘There’s no problem here. Let’s use drugs since we won’t be imprisoned. We’ll just go to rehab.’ That was the meat of their opinion, so it got me thinking that if we decriminalize drug use, we might also decriminalize drug possession.)

“From the start, we have registered our objection because it’s going to send the wrong message to the public like we’re saying it’s okay to do drugs kasi gagamutin namin kayo (because we’ll be rehabilitating them). We’re going to take away the real deterrence in drug use which is imprisonment,” said NBI Commander of National Task Force in Illegal Drugs Ross Jonathan Galicia.

Echoing the NBI’s stance, Philippine Drug Enforcement Agency (PDEA) Director General Moro Lazo said he personally does not encourage this direction in handling drug use in the country.

Lazo cited a provision in the earlier version of the Republic Act No. 6975, which states that drug users could undergo rehabilitation and later face court proceedings with a possibility of a decreased penalty.

But Padilla said that while he understands their position, he insisted that drug users should not be seen as criminals.

(If we don’t accept that drug addicts are victims and that they’re always criminals, then what are we still discussing here? For me, there should be a thin line separating those who use drugs as a business. But for those who buy drugs for a cheap price, we shouldn’t treat them as criminals because they’re also victims.)

Padilla also clarified that he is only pushing to decriminalize small-scale drug use.

(I’m not pushing to decriminalize all drug activities. What I mean, of course, is the small-scale drug players. In other progressive and first world countries, they decriminalize drug use depending on the amount.)

Taking note of the point raised by Padilla, Dela Rosa said: “It really goes without saying that we have to jail the pusher and save the user.”

During the Duterte administration, Vice President Leni Robredo suggested that the country look into the example of Portugal, which has decriminalized drug use since 2001, later leading to lower drug-related deaths and declines in drug abuse among its citizens.

READ: Why not decriminalize drug use? VP urges gov’t to study Portugal move

However, Robredo’s approach to drug use was mocked by former President Rodrigo Duterte, whose brutal crackdown on illegal drugs was marred with extrajudicial killings.

Padilla and dela Rosa have been staunch supporters of the government’s controversial anti-drug campaign, defending it when critics hit its alleged human rights violations.