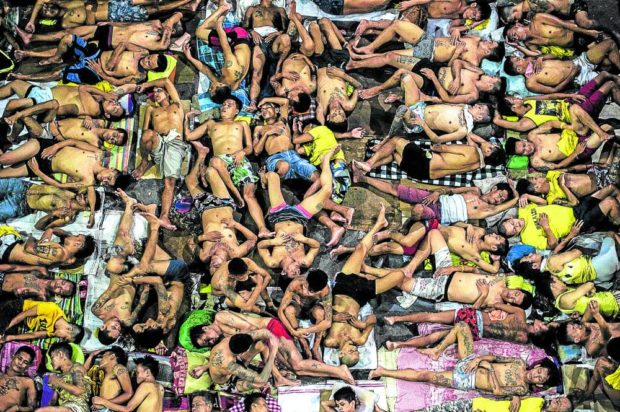 HUMAN RIGHTS SITUATION | The drug war early in the administration of former President Rodrigo Duterte was marked by killings as well as the congestion of prisons, as shown in this 2016 photo. Rights defenders pointed out the impact of the law enforcement campaign on the poor. (File photo from Agence France-Presse)

MANILA, Philippines — Rights advocates on Sunday expressed their reservations about the government’s newly launched “revamped” drug war that promised to focus on demand reduction and rehabilitation, saying a genuine program should include accountability for abuses committed in the conduct of the anti-drug campaign.

Human Rights Watch senior researcher Carlos Conde, Karapatan secretary general Cristina Palabay, and Bayan secretary general Renato Reyes added that while the promised shift to a health-based approach was welcome, it would not absolve the government of any accountability for the thousands of deaths reported at the height of the drug war.

Their comments come a day after the Department of the Interior and Local Government launched the nationwide “Buhay Ingatan, Droga’y Ayawan” (Bida) program.

Interior Secretary Benhur Abalos said the antidrug campaign under President Ferdinand Marcos Jr. would pioneer a different approach that would be “within the framework of the law and with respect for human rights and with focus on rehabilitation and socioeconomic development.”

But at the same time, he warned that law enforcers would not stop going after those involved in the illegal drug trade, as he vowed to fill the jails “with the likes of you who destroy the future of our youth and families.”

For Conde, the government’s statements were “all rhetoric for now, designed to make it appear to the public and the international community that things are changing in the Philippines.”

“The key, main challenge here is that if the Marcos administration is really serious, it should ensure accountability first for human rights violations committed in the drug war,” he said.

“The answer to our human rights problem is not a self-serving pivot but accountability: a serious, honest effort to make those responsible for the abuses in the drug war accountable,” Conde added.

Palabay echoed Conde’s sentiments and also noted that the Bida program was not only overdue but “sorely lacks the crucial elements in terms of drug abuse prevention, harm reduction and resolution of issues regarding accountability.”

Abalos has so far only directed local governments to formulate their local anti-drug plans of action by the end of the year, but he did not elaborate on how the Bida program would pursue drug rehabilitation—an oft-neglected thrust under the heavily policed drug war.

Under the administration of former President Rodrigo Duterte, around 8,000 people were reported by the police to have been killed in anti-drug operations in line with the take-no-prisoners approach to the narcotics problem. Estimates by civil society groups and the International Criminal Court, however, place the figure between 12,000 and 30,000.

Rights advocates have long called for a more humane, rights-based solution while advocating for public health education, ramping up mental treatments, care and support, rehabilitation, and reintegration programs instead.

In particular, any efforts for rehabilitation must also be voluntary, community-based, and nonstigmatizing — meaning, the threat of imprisonment should not be used to coerce drug users to submit to treatment, Conde said.

While there were fragmented efforts from local governments, the Church and civil society organizations to rehabilitate drug users and small-time pushers in the past six years, the country did not have a clear, centralized health-based approach to the drug scourge.

For example, the Mega Drug Abuse Treatment and Rehabilitation Center in Nueva Ecija province, the largest rehabilitation facility in the country, has yet to maximize its 10,000-bed capacity since it opened in December 2016, according to an Inquirer report.

Reyes said the government needs to increase the funding for health services on the whole for drug rehabilitation to be effective.

“If we don’t have adequate health services, how will the government undertake drug rehabilitation?” he asked. “Increasing the health budget over intelligence and confidential funds needs to be done.”

“President Marcos needs to keep his priorities right,” echoed Conde. “And if he cannot prioritize officially stopping the drug war and accountability for drug war abuses, all of this is just for show.”