Cambodian psychiatrist cited for efforts to heal nation from traumatic past 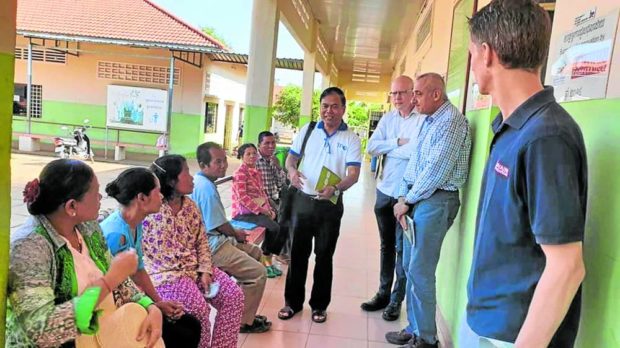 ‘DEMOCRATIC SPACE’ | Dr. Sotheara Chhim at a sports facility in Phnom Penh together with his compatriots and some friends from abroad. (Photo from Ramon Magsaysay Foundation)

MANILA, Philippines — As a young boy, Dr. Sotheara Chhim heard of a warning from an elder that he remembers now had the resonance of prophecy: “Darkness will settle in the people of Cambodia. There will be houses but no people in it, roads but no travelers, and lands will be ruled by barbarians with no religion.”

That would happen shortly, before he reached his teens, as Cambodia endured four years of totalitarian hell following the takeover in 1975 of the extremist radical movement Khmer Rouge.

The brutal regime forcibly relocated residents of the capital Phnom Penh out of the city to the countryside, for the purported objective of establishing a classless society. Instead, this led to indiscriminate mass killings, alongside the deaths of millions from starvation, torture, and disease, while the Khmer leadership became a social class on its own, enjoying the privileges of unlimited power.

The Khmer Rouge was eventually toppled by Vietnam amid the continuing upheavals in the Indochina region at that time.

“After the [fall of the Khmer Rouge], everyone was mentally confused, demoralized, and depressed,” recalled Chhim, then a 7-year-old being reeducated in a labor camp.

In a recent lecture on “mental health lessons from Cambodia” organized by the Ramon Magsaysay foundation, the 54-year-old psychiatrist — one of the four Magsaysay awardees this year — remembered that a generation of survivors had to pick up the pieces and heal themselves from their national trauma.

He said the people gave a name to that collective experience — “baksbat,” loosely translated as “broken courage.”

Chhim said the nation’s healing from an invisible wound should not only focus on medical treatment.

“To have collective healing, we need to work on nonmedical issues of mental health, like justice, truth, community development, livelihood support and increase of democratic space,” he said.

He said that baksbat, while similar to post-traumatic stress disorder, is unique and should be treated in the context of his country’s culture and traditions.

Some of the symptoms he detected among his patients were “ceasing to do anything, being fearful of threat, never wanting to see or experience something again and not wanting to confront people.”

Among the coping activities is testimony therapy, which helps survivors tell their stories in public, after which they would be blessed by a spiritual leader such as a monk.

Another is “victim-perpetrator dialogue” — a session aimed at encouraging dialogue among patients as they endeavor to understand each other’s situations.

“Doing so helps them feel [a sense of] relief and feel that they are safe,” Chhim said.

Establishing such a communication space is crucial in helping overcome baksbat, because survivors usually refuse to confront the past.

“We need to create a democratic space where people can talk freely, without threat and intimidation,” he said. “But this is not easy.”

Cambodia’s healing also entails a collective effort among its various stakeholders. Chhim said the government and the private sector should invest in human and financial resources for mental health and integrate this in primary health care.

He said lack of leadership and coordination results in dismal community health services in rural areas. Furthermore, Cambodia, being a developing nation, does not have enough doctors and psychiatrists to treat patients, especially in the countryside.

This prompted Chhim and his group to train traditional healers to teach them to identify the different mental health issues, so they could understand patients and intervene within their capacities.

When it comes to the more serious cases, these healers would be acquainted with knowing when they should refer a patient to a healthcare professional.

“Mental health is not known to the community. They think it’s possession by a spirit or [that] somebody [has cast a spell of] black magic,” he said.

But that view is gradually changing, as he noted that “a lot of community people we have worked with, who used to refer [patients] to traditional healers, [have started to] understand and refer them to health centers or clinics.”

“Now, I receive a lot of referrals from monks,” he added.

Dr. Cornelio Banaag Jr., president of the Philippine Mental Health Association and a panelist at the lecture, credits Chhim’s work as a huge contribution to mental health interventions.

“Certain segments of the population understand [mental health], but in the provinces, they don’t have an idea… What Dr. Chhim did was indigenize the term,” he said, adding that his organization has also started working at the grassroots level, training traditional “hilot” and midwives to be “sensitive to the mental health signals of the patients.”

Khmer Rouge leaders jailed for life for crimes against humanity