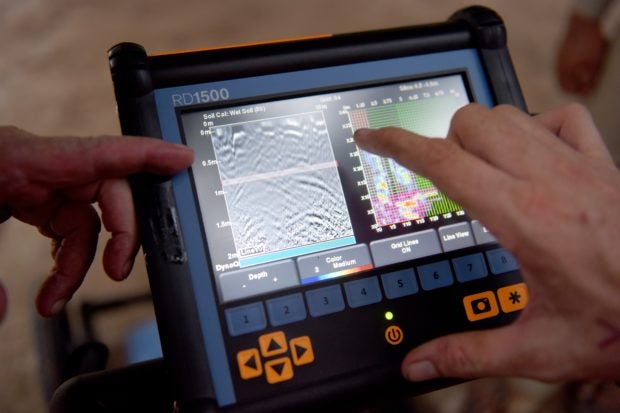 This photo taken on October 24, 2018 shows experts from SparrowHawk Far East company, cheking the data on the screen of the ground-penetrating radar machine during a search for mass graves at a school compound in Prey Veng province.  AFP

The pilot project is twinning technology and fieldwork to locate remains of victims of the Khmer Rouge, the ultra-Maoist regime whose quest to build an agrarian utopia from 1975-1979 left an estimated two million Cambodians dead.

Hacked to death, starved, overworked or ravaged by illness, their bodies were dumped in hastily dug pits all over the country. They were thrown in rice paddies, down caves and on the grounds of Buddhist monasteries.

Many of the “Killing Fields” have been logged, providing experts with an estimate of 20,000 mass graves — which is defined as a pit containing four or more bodies — throughout the country.

But researchers are now turning to radar to uncover more details on the existing sites — such as how many bodies they might contain — and find new ones.

“This is the first time ever that we have used high-end technology in Cambodia to locate mass graves created by the Khmer Rouge,” said Pheng Pong-Rasy from the Documentation Center of Cambodia (DC-Cam), which is overseeing the effort.

He added that DC-Cam decided to start the new search in the eastern province of Prey Veng, where the Khmer Rouge’s revolutionary movement had some of its early gains.

“The children must know their own history, what happened in their location,” he said.

They began in late October next to buildings at Mesang High School — specifically plots close to some concrete toilets and an outdoor cafeteria.

The area was once a worship site but the Khmer Rouge converted it into a place for executions. After the regime fell a school was built nearby.

Students and residents helped clear the overgrown area and operators from SparrowHawk Far East, a new Phnom Penh-based company tapped to test out the idea, walked over it sending radar signals below that can later be developed into three-dimensional images.

“When there is an object underground or the ground has been disturbed before, if there was a hole dug, it will give off a different signature,” managing director Michael Henshaw told AFP.

Khmer Rouge researchers have since the 1990s relied mainly on meticulous interviews with the regime’s victims and perpetrators to pinpoint the locations of mass graves.

Elsewhere radar has helped locate indigenous burial sites — graves from the Spanish Civil War in 1936-1939 and victims of the 1990s conflict in Bosnia.

In September, it also aided in the discovery of at least 166 bodies in the Mexican state of Veracruz, a territory plagued by drug cartels.

Henshaw said the results can bring about a greater understanding of what happened in Cambodia.

“We can try to put a better number on how many victims there actually were,” he said.

As curious students look on, Henshaw examines preliminary results on a screen while the sun, interrupted by the occasional rainshower, beats down.

He points to what he calls “anomalies,” which look like small ridges next to each other, possibly signifying decomposed remains.

“But this definitely tells you that there is something under the ground, and there’s a lot of it.”

SparrowHawk is plugging the data into special software and preparing a full report on their findings, and DC-CAM will then make a decision on how far to replicate the study.

No matter the results from Prey Veng there will be no excavations and reburials. In keeping with local tradition, the remains will not be disturbed and will will stay where they are.

“They already died without justice, so if we dig up graves, it will destroy their souls,” Pong-Rasy said. “We just want to know how many bodies are in the graves.”

DC-Cam maintains a database of mass graves previously discovered and it has provided information on sites to a war crimes tribunal that has convicted two top Khmer Rouge officials and a chief jailer.

“Crimes do not end at a tribunal,” he told AFP, adding that a better future for Cambodia required “understanding the horrors” of its past.

“We should not stop searching for the answers.” /ee