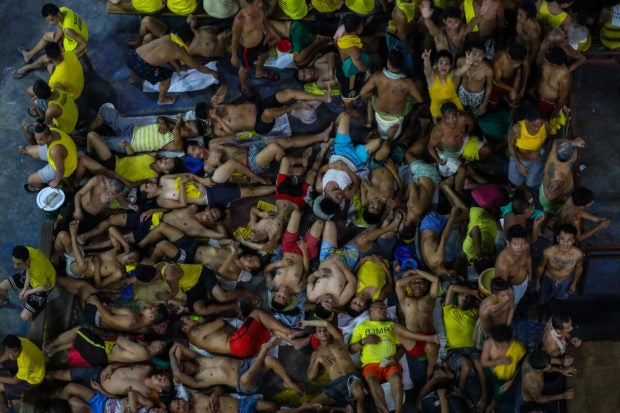 This photo taken on March 27, 2020, shows prison inmates sleeping and gesturing in cramped conditions in the crowded courtyard of the Quezon City jail in Manila. (File photo by MARIA TAN / Agence France-Presse)

MANILA, Philippines — The construction of national prisons at each of the country’s 17 regions is being eyed as a long-term solution for many of the decades-long problems of the Bureau of Corrections (BuCor).

The overcrowding of Bilibid was seen as the main reason for many of its problems, including the high mortality rate of its inmates—of which 176 corpses were found last month to have been left unclaimed by their relatives since December last year.

NBP, the largest mega prison in the world, is currently housing a total of 29,204 inmates in a facility intended only for 6,435.

As a long-term solution, Catapang wanted to start the construction of regional prisons by next year, starting with the proposed BuCor facility at the military’s Fort Magsaysay in Nueva Ecija.

He said that building national prisons in each of the country’s 17 regions was more advantageous than the current setup of BuCor, which has seven prisons and penal farms.

“[With regional prisons], inmates can be easily visited by their relatives. They can also be reintegrated to society faster since they will just return to their communities. And last, while we do not want it, once the inmates die, their bodies can be easily claimed by their families. No more “tawid-dagat” (crossing the sea) needed,” Catapang explained.