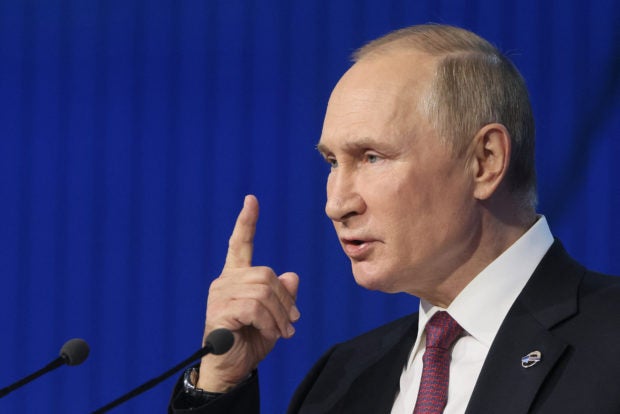 Russian President Vladimir Putin delivers a speech during the 19th Annual Meeting of the Valdai Discussion Club in Moscow, Russia, on October 27, 2022. Sputnik/Mikhail Metzel/Pool via REUTERS

MOSCOW — Opposition politician Ilya Yashin, who went on trial in Moscow on Wednesday, risks becoming the latest in a long line of Kremlin critics slapped with heavy jail terms.

Others have been killed or narrowly escaped death while still others have gone into exile.

Here is a list of Putin’s best known critics.

Boris Nemtsov, a Kremlin critic and a former deputy prime minister, was shot dead in 2015 as he walked home across a Moscow bridge near the Kremlin.

Five Chechen men were convicted of killing Nemtsov, but the mastermind of the murder was never found.

Nemtsov’s allies have pointed the finger of blame at the Kremlin as well as Chechen leader Ramzan Kadyrov, who has denied the accusation.

The charismatic speaker had slammed Putin’s annexation of Crimea from Ukraine in 2014 and regularly taken part in opposition protests.

In 2006, the killing of journalist Anna Politkovskaya outside her Moscow home had shocked the world.

Politkovskaya, a reporter at Novaya Gazeta, Russia’s top independent newspaper, was a fierce critic of the Kremlin’s tactics in Chechnya.

The newspaper’s editor Dmitry Muratov dedicated his Nobel Peace Prize this year to Politkovskaya and other Russian journalists killed for their work.

Russia’s main opposition politician Alexei Navalny was poisoned with Novichok, a Soviet-made nerve agent, on a trip to Siberia in 2020.

He underwent treatment in Germany and returned to Russia in January 2021, where he was arrested upon landing at a Moscow airport.

The 46-year-old is serving a nine-year sentence on embezzlement charges his supporters call punishment for challenging the Kremlin.

Navalny has denounced Putin’s Ukraine offensive from prison, calling it a “tragedy” and a “crime against my country.”

Vladimir Kara-Murza, an opposition politician, was arrested in April for spreading “fake” information about the Russian army.

He was later charged with high treason and faces up to 20 years in prison.

Kara-Murza, 41, says he has been poisoned twice.

In August, Yevgeny Roizman, the former mayor of Yekaterinburg, was detained for his criticism of Russia’s assault on Ukraine.

After his arrest sparked protests, the 60-year-old opposition politician was released from custody as he awaits trial on charges of “discrediting” the Russian army.

Some of Putin’s high-profile critics have been based abroad for years, such as former oil tycoon Mikhail Khodorkovsky, who spent a decade in prison after challenging the Russian leader early in his rule.

Khodorkovsky is based in London and has financed media projects critical of the Kremlin.

Many of Navalny’s prominent allies fled Russia after his organizations were banned as “extremist” last year.

But the decision to send troops to Ukraine, which ushered in an unprecedented crackdown at home, proved to be a final nail in the coffin for Russia’s opposition movement.

Russians opposed to Moscow’s attack on Ukraine are now scattered around the world, with many fleeing to Europe and Israel.

Based in Israel, the 46-year-old show star regularly denounces the Russian army’s offensive on Instagram.

Despite a rare intervention by Pugacheva — who is widely considered untouchable — Galkin has been branded a “foreign agent.”

The label, which has Stalin-era connotations, has been used by authorities to mount pressure on critics.

Many journalists and Russia’s main independent media outlets have been slapped with the label, making it much harder to operate.

All main independent media organizations in Russia have been shut down or suspended operations.

Other popular figures who have spoken out against Moscow’s Ukraine offensive — such as hugely popular rappers Oxxxymiron and Noize MC, as well as exiled science fiction writer Dmitry Glukhovsky — have also been labelled “foreign agents.”

Vladimir Putin is safe in power for now, but risks lie ahead, sources say