Vladimir Putin is safe in power for now, but risks lie ahead, sources say | Inquirer News

Vladimir Putin is safe in power for now, but risks lie ahead, sources say 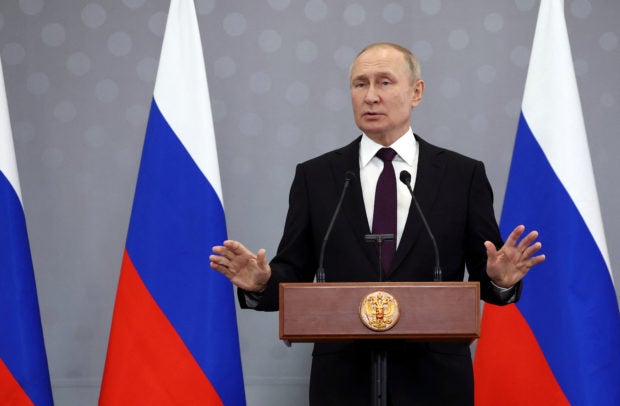 LONDON — Vladimir Putin’s grip on power in Russia remains firm despite military setbacks in Ukraine, a botched mobilization, and political infighting, eight well-informed sources said, but some said that could change fast if total defeat beckoned.

Most of them said the Russian president was in one of the tightest spots in his more than two decades in power over Ukraine, where his invading forces have been pushed back in places by a Western-armed Kyiv.

But the sources, including current and former Western diplomats and government officials, said no imminent threat was apparent from his inner circle, military or intelligence services.

“For the moment, Putin is hanging in there,” said Anthony Brenton, a former British ambassador to Russia.

He said he believed the Russian leader hoped to negotiate over Ukraine, probably with the Americans, and hoped Moscow’s flagging battlefield fortunes would pick up despite what the West says is a lack of manpower, hardware and even missiles.

In power since 1999, Putin has weathered numerous domestic crises and wars, and more than once faced down large street protests before effectively outlawing any real opposition.

The 70-year-old’s “special military operation” in Ukraine since Feb. 24, however, has created the most tense East-West standoff since the 1962 Cuban missile crisis and triggered the harshest Western sanctions against Russia ever.

His army has endured humiliating retreats as well as huge losses, and hundreds of thousands of Russian men have fled abroad to avoid combat. Putin has also engaged in nuclear saber-rattling in what some interpret as a sign of desperation.

Some allies — from “Putin’s foot soldier”, as the Kremlin-backed leader of Chechnya calls himself, to “Putin’s chef”, nickname of the head of a once shadowy mercenary group — have accused military chiefs of mishandling the war.

Brenton, who dealt with Putin during his second term, said there had been no public criticism of him from the political or business elite or any sign of a move against him, but that may not last.

“If they find themselves continuing to retreat come the spring, come March/April next year, then my instinct is that at that point things become really problematic for Putin — not at the popular level, but at the elite level.

“You have a bunch of people there who are fundamentally self-interested who don’t want to be part of an eventual debacle.”

Protests against mobilization by relatives, Ukraine’s vow not to deal with Putin, and an apparently unscripted and quickly walked-back assertion from U.S. President Joe Biden that Putin must not be allowed to stay in power, have fueled speculation about his future.

Dmitry Peskov, Putin’s spokesman, said a Washington Post report this month that a member of Putin’s inner circle had confronted him over the war was “absolutely not true” but said there was candid policy debate.

“There are working arguments: about the economy, about the conduct of the military operation,” Peskov told reporters. “It is not a sign of any split.”

The Kremlin says Putin is backed by an overwhelming majority of Russians and won a landslide re-election victory in 2018.

Russia’s political system is famously opaque, though Washington showed in the run-up to the invasion that it could discern Moscow’s plans.

A senior Western official who follows the situation closely and declined to be named due to the sensitivity of the subject, said there had so far been no major defections.

There were signs of infighting, complaints and slow decision-making, the official said: “But there are no signs that he’s lost control.”

A U.S. official who declined to be named for the same reason said Washington and its allies assumed Putin’s position was secure. “That said, many of his recent actions – including mobilization – clearly show Putin is on the back foot.”

With powerful intelligence services underpinning a political system staffed by closely-watched loyalists, it would be difficult and dangerous for anyone to move against him.

Andrew Weiss, a Putin specialist at the Carnegie Endowment, said that while “everything is possible” in Russia, public opinion is less important there than in the West, real opponents have fled or been jailed and Putin was surrounded by loyalists.

“Show me the person who’s going to speak in Putin’s office and say you’re done. Who would have the audacity to do that?” said Weiss, who has had various policy roles on the U.S. National Security Council and has written a book about Putin.

The Russian leader could be toppled through a palace coup, an elite rebellion, or a grassroots “storming of the Bastille”, he said, while noting that Iraqi leader Saddam Hussein had ruled for more than a decade after his 1990 invasion of Kuwait was thwarted.

Tatiana Stanovaya, founder of the R.Politik analysis firm, said Putin would be in trouble if he ran out of options to escalate the conflict.

In that case, the elite would try to persuade Putin to step aside, she predicted, adding there was no sign yet of the kind of coups which unseated Soviet leader Nikita Khrushchev in 1964 or targeted Mikhail Gorbachev in August 1991.

“If he’s able to … fulfill his unspoken obligations before the elite and the population — stability, peace, pensions and salaries — then nothing will threaten him,” said Stanovaya.

“But if … the Russian army is pushed back to the old borders of Russia pre-annexation, if the Ukrainian army goes on the offensive further…and if the budget can’t cope and there are delays to pensions…the elite will gradually mobilize.”

“Let’s not forget that fear reigns,” said the source. “I still think a majority of Russians will back Putin whatever he decides.”

A senior European official said Putin would have to demonstratively lose the war to be unseated.

If and when that time came, said former British ambassador Brenton, his successor was unlikely to be a friend of the West.

“The people who are going to make the decisions are tough securocrats. We’re not going to get a cuddly liberal.”

Russia’s Putin says West is failing, the future is in Asia