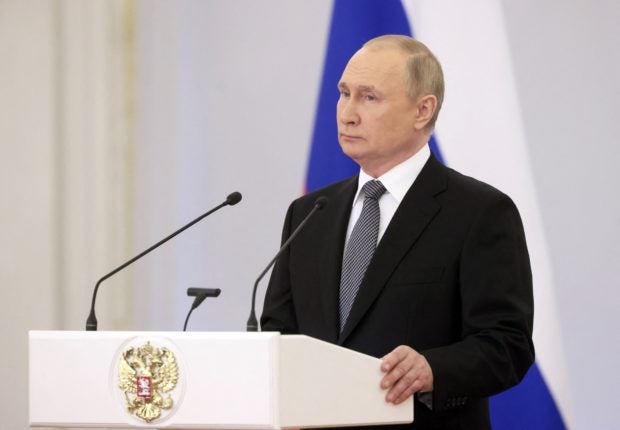 Russian President Vladimir Putin delivers a speech during a meeting with graduates of the country’s higher military schools at the Kremlin in Moscow on June 21, 2022. AFP

PARIS — Baths in blood extracted from the antlers of Siberian deer. Excrements scooped up by loyal officials to evade analysis. Mysterious absences for emergency medical treatment.

The claims made about the health of Russian President Vladimir Putin, who will be 70 in October, are lurid and macabre, as well as impossible to verify.

But they illustrate how little is known about the health of a leader whose medical condition is fundamental to the future of Europe, all the more so after he ordered Russia’s invasion of Ukraine.

Over the course of Putin’s two decades in power, remarkably little has emerged about his health, beyond the famous images provided by the Kremlin showing him bare-chested in a bid to project an image of macho strength.

But scrutiny has now increased with the war that Putin unleashed against Russia’s neighbor.

What are the claims?

The most in-depth investigation into Putin’s health was published in April by the Russian-language news site Proekt, which used open-source data to conclude that the president’s trips to the southern resort city of Sochi were synchronized with those of a large number of doctors.

They included specialist in thyroid cancer Yevgeny Selivanov, whose visits to Sochi frequently coincided with Putin’s sudden absences from the public eye over the past years.

It also alleged that one of the methods used by Putin to ensure longevity were baths in blood extracted from deer antlers in Siberia, a method recommended by his friend Defense Minister Sergei Shoigu, who is from Siberia.

French weekly Paris Match this month said that on visits to Saudi Arabia in 2019 and France in 2017, Putin was accompanied by a team whenever he went to the toilet, to keep his excretions so no foreign power could medically analyze his urine or stools.

Even more sensationally, US publication Newsweek said in June that Putin had undergone treatment for advanced cancer in April, citing American intelligence. The US National Security Council denied the existence of such briefings.

Proekt also alleged that the Kremlin set up a fake office in Sochi that purported to look like the one at his suburban Moscow residence to make it look like he was working in the Russian capital rather than resting at the Black Sea resort.

What information is there?

The only time the Kremlin confirmed Putin was suffering a health problem was the fall of 2012, when he canceled several meetings and vanished from public life after being seen moving awkwardly.

The Kremlin at the time said he had pulled a muscle and one newspaper said he aggravated a back problem during a stunt when he flew with cranes on a motorized hang-glider. But Proekt alleges it was here that his major health problems began.

The Covid-19 pandemic has also seen sometimes odd conduct from the Russian leader.

The Kremlin said he had been vaccinated, but unlike almost all other world leaders, no images ever emerged of his jab. Those coming into close contact with him, including journalists, were subject to the most stringent precautions such as days of quarantine.

Visiting world leaders who did not accept the Kremlin’s stringent conditions — such as French President Emmanuel Macron and UN chief Antonio Guterres — were banished to the end of a now notoriously long table.

Those who accepted the Kremlin’s demands, including a Russian Covid test, and possibly quarantine, such as Armenian Prime Minister Nikol Pashinyan were allowed a handshake and even an embrace.

A meeting with Shoigu on Ukraine in late April also fueled rumors with Putin tightly gripping the table in what some saw a bid to stop body tremors. Numerous videos have also shown one of Putin’s feet fidgeting during meetings.

The Kremlin has meanwhile postponed Putin’s annual direct line phone-in with the Russian people, usually a fixture in June, to a later date without explanation.

Huge efforts appear to have been made to protect Putin. In his 2020 annual news conference only a handful of reporters — quarantined and tested beforehand — were allowed in the room with him, while others massed in another hall.

In 2021, the event returned to its usual format but with a vast distance between the front row of journalists and Putin’s desk. Even now, with the business of government returning to normal in most of the world, Putin conducts most domestic business via video.

What does the Kremlin say?

The Kremlin, via Putin’s spokesman Dmitry Peskov, has vehemently denied all claims that the Russian president is suffering from any serious health problem.

Foreign Minister Sergei Lavrov took the highly unusual step in an interview with French television channel TF1 in late May to deny Putin was ill, saying “I don’t think that sane people can see in this person signs of some kind of illness or ailment” and claiming that the Russian leader appeared in public “every day”.

Belarus President Alexander Lukashenko, ostracized by the West but a frequent face-to-face interlocutor with Putin, insisted in a March interview with Japanese television that the Russian leader was in rude health.

“If you think that something is wrong with President Putin or something happened, you are, as we say, the most pitiful person on earth,” he said.

In recent public appearances — including a forum on Peter the Great and a meeting with Turkmenistan President Serdar Berdymukhamedov — Putin has also shown no sign of physical frailty.

Putin remains the undisputed leader of Russia and most observers expect him to seek a third consecutive mandate in 2024, after recent controversial constitutional changes allowing him to do so.

There is no obvious successor and, as commander in chief of the Russian forces, it was the decision of Putin to invade Ukraine on February 24.

“The country does not know a word of truth about the physical and emotional health of the person who runs it,” said the editor-in-chief of Proekt, Roman Badanin.

“The whole planet does not know if a person who could destroy all of humanity by pressing a red button is healthy.”