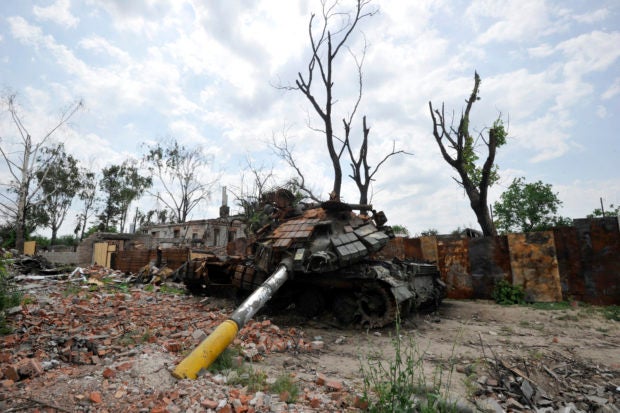 A destroyed tank is pictured in the village of Novoselivka, outside Chernigiv, on June 21, 2022, amid the Russian invasion of Ukraine. AFP

Russia’s security council chief Nikolai Patrushev warns European Union and NATO member Lithuania of “serious” consequences over its decision to ban the rail transit of goods that are subject to EU sanctions between mainland Russia and Kaliningrad, a Russian region wedged between Lithuania and Poland.

He says retaliatory steps “will be taken in the near future” and says they will have a “serious negative impact” on Lithuania.

Lithuania argues that it is merely doing its duty by implementing EU sanctions.

No EU opposition to Ukraine candidacy

EU ministers back granting Ukraine “candidate status” to join the bloc, ahead of a summit expected to formally greenlight the move, France’s Europe minister says.

Clement Beaune says after a meeting with his counterparts that there was “a total consensus on moving these issues forward, and in particular for Ukraine the possibility of confirming candidate status as soon as possible”.

Ukraine says Russian shelling has caused “catastrophic destruction” in the eastern industrial city of Lysychansk, which lies just across a river from Severodonetsk where Russian and Ukrainian troops have been locked in battle for weeks.

He adds that “fierce fighting” is ongoing at the Azot chemical plant in Severodonetsk where hundreds of civilians are believed to be sheltering.

Ukraine says it has “finally” deployed an advanced German artillery system, in the latest delivery of the long-range, precision weapons that it has been begging for.

US Attorney General Merrick Garland pledges during a visit to Ukraine to help prosecute war crimes committed since the Russian invasion.

“The United States is sending an unmistakable message — there is no place to hide,” Garland says. “We and our partners will pursue every avenue available to ensure that those who are responsible for these atrocities are held accountable.”

Kyiv says it has identified thousands of suspected war crimes, including the suspected murder of scores of civilians in Bucha, just outside the Ukrainian capital.

The United States confirms that a second American was killed fighting for Ukraine, amid worries over two other US citizens captured battling Russia.

The State Department said that 52-year-old Stephen Zabielski died in Ukraine and that it was providing his family with consular assistance, reiterating that US citizens should not travel to Ukraine due to the war.

In April, a 22-year-old former marine Willy Cancel was killed in Ukraine.

Russia is accusing two other Americans captured while fighting alongside Ukrainian forces of being mercenaries and demanding they be “held accountable”.

A leading Russian journalist raises $103.5 million for children displaced by the war by auctioning off his Nobel Peace Prize gold medal in New York.

Dmitry Muratov, editor-in-chief of the investigative newspaper Novaya Gazeta, won the Nobel prize last year, together with journalist Maria Ressa of the Philippines, for his three-decade fight for freedom of expression.

In March, Novaya Gazeta suspended operations after Moscow passed a law providing for tough jail terms against anyone criticising Russia’s invasion of Ukraine.