Russia's Putin says West is failing, the future is in Asia | Inquirer News

Russia’s Putin says West is failing, the future is in Asia 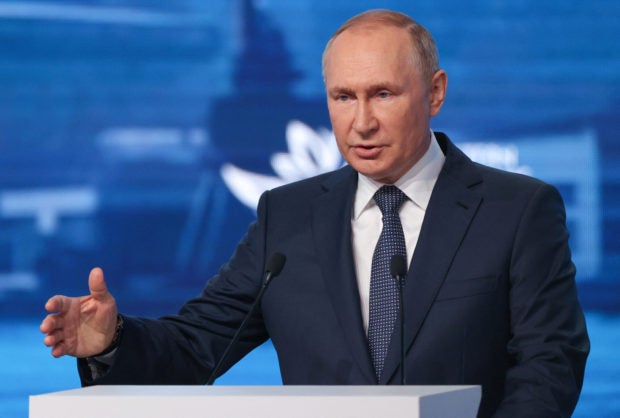 VLADIVOSTOK, Russia — President Vladimir Putin said on Wednesday that the West was failing because a futile and aggressive attempt to isolate Russia with sanctions was destroying the global economy just as Asia was rising to claim the future.

The United States and its allies imposed the most severe sanctions in modern history on Russia for what Putin casts as a special military operation in Ukraine. Putin says the sanctions are akin to a declaration of economic war.

Putin, speaking to the Eastern Economic Forum in the Russian Pacific city of Vladivostok, said the Western sanctions on Russia had replaced the COVID pandemic as the main threat to the global economy.

“I am speaking of the West’s sanctions fever, with its brazen, aggressive attempt to impose models of behaviour on other countries, to deprive them of their sovereignty and subordinate them to their will,” Putin said.

“In an attempt to resist the course of history, Western countries are undermining the key pillars of the world economic system built over centuries,” Putin said, adding that confidence in the dollar, euro and sterling was falling.

Russia sent tens of thousands of troops into Ukraine on Feb. 24 in what it called a special operation to degrade its southern neighbour’s military capabilities and root out people it called dangerous nationalists.

Ukrainian forces have mounted stiff resistance. Neither side has disclosed how many soldiers have been killed.

The West’s attempt to economically isolate Russia – one of the world’s biggest producers of natural resources – has propelled the global economy into uncharted waters with soaring prices for food and energy.

It has hurt Russia too.

Putin said the West was trying to impose its will on the world but that their power was in decline as the crucible of global growth was now in Asia.

“Irreversible and even tectonic changes have taken place throughout international relations,” Putin said. “The role of dynamic, promising countries and regions of the world, primarily the Asia-Pacific region, has significantly increased.”

Among the guests at the forum was China’s top legislator Li Zhanshu, currently ranked No.3 in the Chinese Communist Party.

Putin said that China would pay Gazprom for its gas in national currencies, based on a 50-50 split between the Russian rouble and Chinese yuan.

Putin also said Russia’s economy was coping with what he termed the financial and technological aggression of the West, but acknowledged some difficulties in some industries and regions.

Russia hit with new round of US sanctions