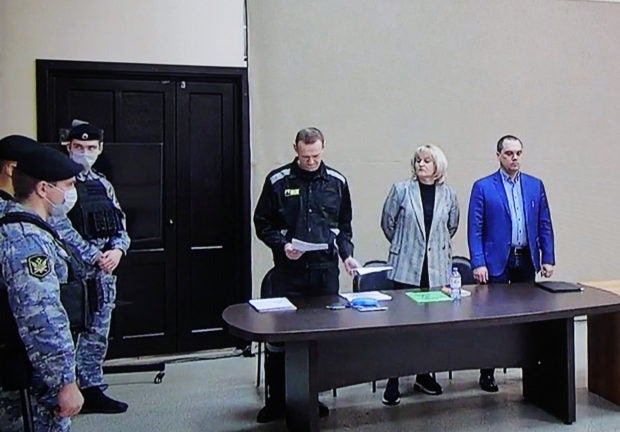 Russian opposition leader Alexei Navalny, accused of fraud and contempt of court, his lawyers Olga Mikhailova and Vadim Kobzev are seen on a screen via a video link during a court hearing at the IK-2 corrective penal colony in the town of Pokrov in Vladimir Region, Russia March 22, 2022. Navalny is already serving a two-and-a-half year sentence at a prison camp east of Moscow for parole violations. REUTERS/Evgenia Novozhenina

A Russian court found jailed Kremlin critic Alexei Navalny guilty of large-scale fraud and contempt of court on Tuesday, a move likely to extend by years the time that President Vladimir Putin’s most prominent critic spends in jail.

Navalny is already serving a two-and-a-half-year sentence at a prison camp east of Moscow for parole violations related to charges he says were fabricated to thwart his political ambitions.

In the latest criminal case against him, which he has also dismissed as politically motivated, he could have up to 13 years added to that sentence.

A gaunt Navalny stood beside his lawyers in a room filled with prison security officers as the judge read out the accusations against him. The 45-year-old seemed unfazed, looking down as he flipped through court documents.

Prosecutors had asked the court to send him to a maximum-security penal colony for 13 years on charges of fraud and contempt of court. A ruling is expected later on Tuesday.

Judge Margarita Kotova said Navalny had committed a criminal offense by publicly insulting the court and she confirmed he had pleaded not guilty to the fraud charges.

Washington condemned what it called a “sham trial” and said the court’s verdict was part of efforts by Moscow to suppress dissenting voices since its invasion of Ukraine last month.

“This disturbing decision … is another example of the Russian government’s widening crackdown on dissent and freedom of expression, which is intended to hide the Kremlin’s brutal … and unprovoked war against Ukraine,” U.S. State Department spokesperson Ned Price said on Tuesday.

President Putin sent his troops into Ukraine on Feb. 24 in what he calls a “special military operation” to disarm Ukraine and replace its pro-Western leadership.

Navalny was jailed last year when he returned to Russia after receiving medical treatment in Germany following a poison attack with a Soviet-era nerve agent during a visit to Siberia in 2020. Navalny blamed Putin for the attack.

The Kremlin said it had seen no evidence that Navalny was poisoned and denied any Russian involvement if he was.

After the last court hearing on his case on March 15, Navalny struck a typically defiant tone, writing via Instagram: “If the prison term is the price of my human right to say things that need to be said … then they can ask for 113 years. I will not renounce my words or deeds.”

Russian authorities have cast Navalny and his supporters as subversives determined to destabilise Russia with backing from the West. Many of Navalny’s allies have fled Russia rather than face restrictions or jail at home.

Navalny’s opposition movement has been labelled “extremist” and has been shut down, though his supporters continue to use social media to express their political stance, including their opposition to Moscow’s military intervention in Ukraine.