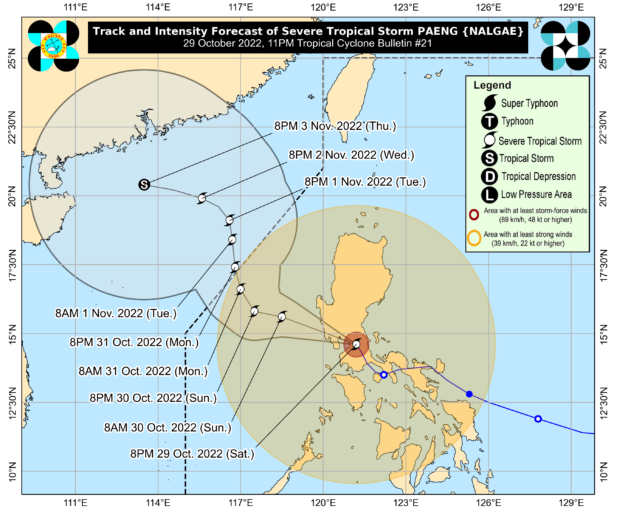 MANILA, Philippines — Severe Tropical Storm Paeng (international name: Nalgae) is expected to be out of the Philippine area of responsibility (PAR) by Monday, according to the weather bureau.

But light to heavy rains may still be expected beginning Sunday when the storm is forecast to leave the Luzon landmass by 5 a.m., it added.

In its 8 p.m. bulletin on Saturday, the Philippine Atmospheric, Geophysical and Astronomical Services Administration (Pagasa) said Paeng was projected to be out of PAR by 5 p.m. on Monday

By Sunday, light to moderate with at times heavy rains are expected over Metro Manila, Calabarzon, Central Luzon and Mimaropa regions, and the Cordillera Administrative Region.

Moderate to heavy with at times intense rains are expected over the provinces of Zambales and Bataan and the Ilocos Region.

Pagasa said widespread flooding and rain-induced landslides are still forecasted, especially in areas that are “highly susceptible to these hazards, as identified in hazard maps and in localities with significant antecedent rainfall.”

Paeng, which began as a low pressure area outside PAR on Oct. 23, developed into a severe tropical storm which began to cover much of the archipelago by Friday.

She also noted that despite its strength, “land interactions” may have also helped weaken Paeng on its way out of Luzon.

Storm Signal No. 2 was raised over the rest of Zambales and Quezon, the rest of Mindoro Island, the southern portion of Aurora, the western portion of Camarines Sur, and Bulacan, Pampanga, Tarlac, Nueva Ecija, Pangasinan, Camarines Norte, Marinduque and Romblon provinces.