Don’t care about climate change? Wait until it hits you in the face | Inquirer News

Don’t care about climate change? Wait until it hits you in the face 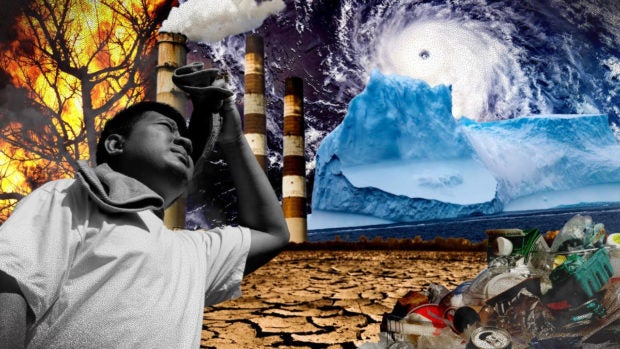 MANILA, Philippines—People, in many cases, won’t care about climate change until its impact hits them in the face, like what happened to millions of Filipinos in several Visayas provinces when Super Typhoon Yolanda (Haiyan) struck.

As stated by the National Disaster Risk Reduction and Management Council, the typhoon left P95.4 billion in damage as it wrecked 1.1 million houses and 33 million coconut palms, which were considered as the main livelihood in the provinces it hit.

Because of its strength that inflicted “lingering effects” on the economy, poverty incidence spiked to 25.8 percent in the first six months of 2014, the National Economic and Development Authority (Neda) had said.

Take the case of Eastern Visayas, which was the worst hit by Yolanda. Back in 2012, its poverty incidence rate was 45.2 percent, but in 2014, months after the destruction of the typhoon, poverty grew to 54.9 percent. 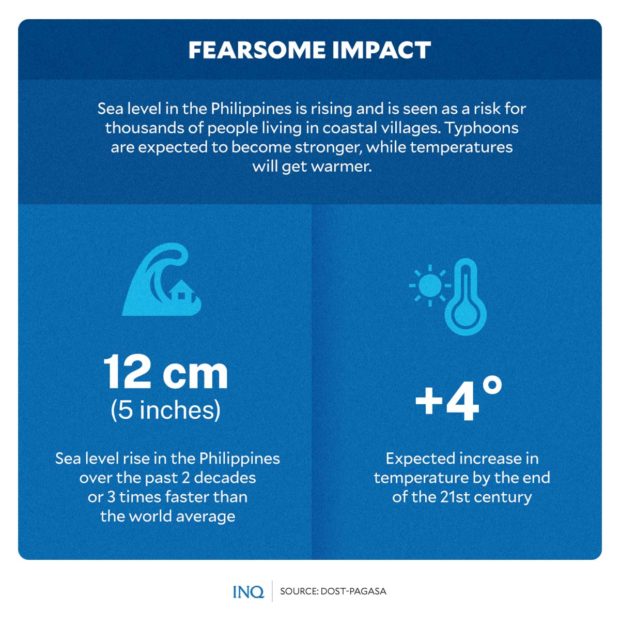 Neda had said the poverty incidence rate in the region indicated that out of the 4.1 million people living in the provinces of Leyte, Southern Leyte, Samar, Easter Samar, Northern Samar and Biliran then, over 2 million were already poor.

Nine years since Yolanda, the World Bank stressed that climate change, which was blamed for the typhoon’s overkill, could once again inflict a heavy toll on the poorest Filipinos.

This is why climate change has to be addressed now, it said.

Economic consequencesPeople, in many cases, won’t care about climate change until its impact hits them in the face, like what happened to millions of Filipinos in several Visayas provinces when Super Typhoon Yolanda (Haiyan) struck.

As the Philippines Country Climate Development Report was launched, Coulibaly said without intervention from the government and private sector, climate change will likely slash gross domestic product (GDP) by 13.6 percent by 2040. 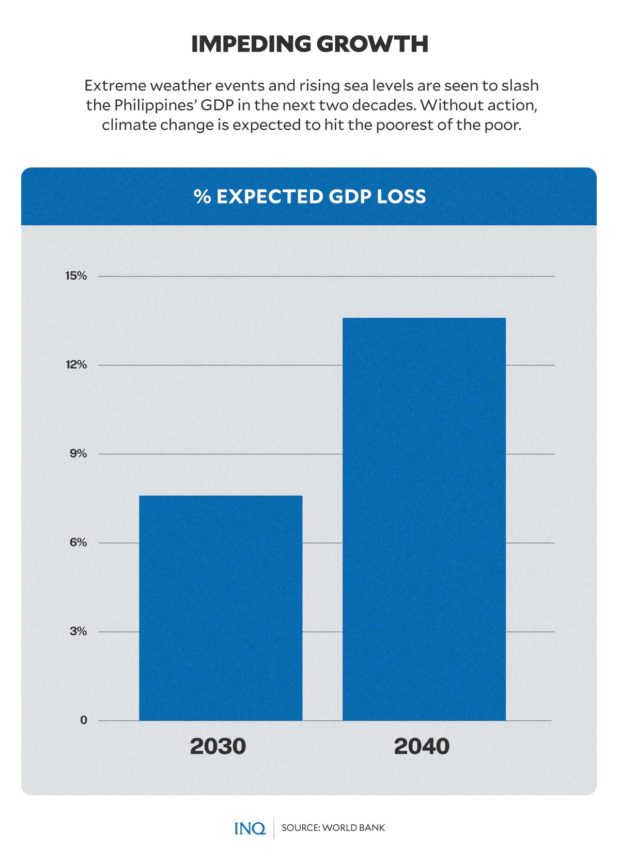 “Damages from climate change are a threat to the Philippine economy. It is likely to reduce GDP substantially, but the range of possible outcomes is wide,” said Coulibaly, who is the program leader of World Bank’s Equitable Growth and Finance Institution.

He said the consequences of climate change are expected to negatively impact economic growth as it is seen to erode natural and physical capital, lessen work productivity, weaken financial stability, and alter domestic and external competitiveness.

RELATED STORY: PH loss from too much, or zero, water seen to hit $124B of GDP

As stressed by Coulibaly, “modeling shows that if no measure is taken to address climate change by 2040, the poverty rate will increase by nearly a percentage point, economic insecurity by frequent 3 points and inequality by 0.3 points.”

This, as “temperatures in the Philippines will continue to rise by the end of the 21st century,” while “rainfall patterns will change and intensify, and extreme weather will become more frequent.”

Based on the World Risk Report 2022 by Germany-based Bündnis Entwicklung Hilft and the Institute for International Law of Peace and Armed Conflict at Ruhr University Bochum, the Philippines is the world’s most disaster-prone country.

With an index score of 46.82, it was stressed that the Philippines’ high risk, exposure, and vulnerability to disasters were the reasons it is now considered as the country most susceptible to disasters. 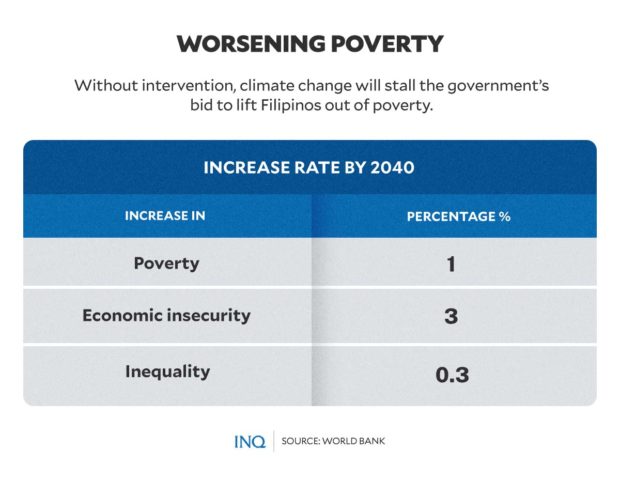 The Philippine Atmospheric, Geophysical and Astronomical Services Administration (Pagasa) said while typhoons hitting the country are becoming fewer, those that do make landfall are becoming stronger.

Every year, an average of 20 typhoons enter the Philippine Area of Responsibility, with about eight or nine making landfall.

Likewise, Pagasa said it was expecting the country’s temperature to rise by four degrees by the end of the 21st century, while the intensity of typhoons that make landfall will continue to increase.

As scientists had stressed, warmer temperatures, which melt ice caps and cause oceans to expand, was the reason that sea levels are rising.

Here in the Philippines, Pagasa climate scientist Dr. Marcelino Villafuerte said the sea level in the Philippine Sea had risen by about 12 centimeters, or about 5 inches, over the past two decades.

Pagasa said the sea level in the Philippines is rising three times faster than the world average. With 70 percent of its municipalities facing large bodies of water, including the Pacific Ocean, the rise could spell a “big impact” on millions.

Climate change is complex, but if people will look at how it impacts their lives, it becomes easy to understand.

Pagasa said “climate change is one of the most fundamental challenges ever to confront humanity. Its adverse impacts are already being seen and may intensify exponentially over time if nothing is done to reduce further emissions of greenhouse gases.”

Take the case of rising temperatures. It said a warmer world will certainly impact systems and sectors although, magnitude of impacts will depend on considerations such as sensitivity, exposure and adaptive capacity to climate risks. 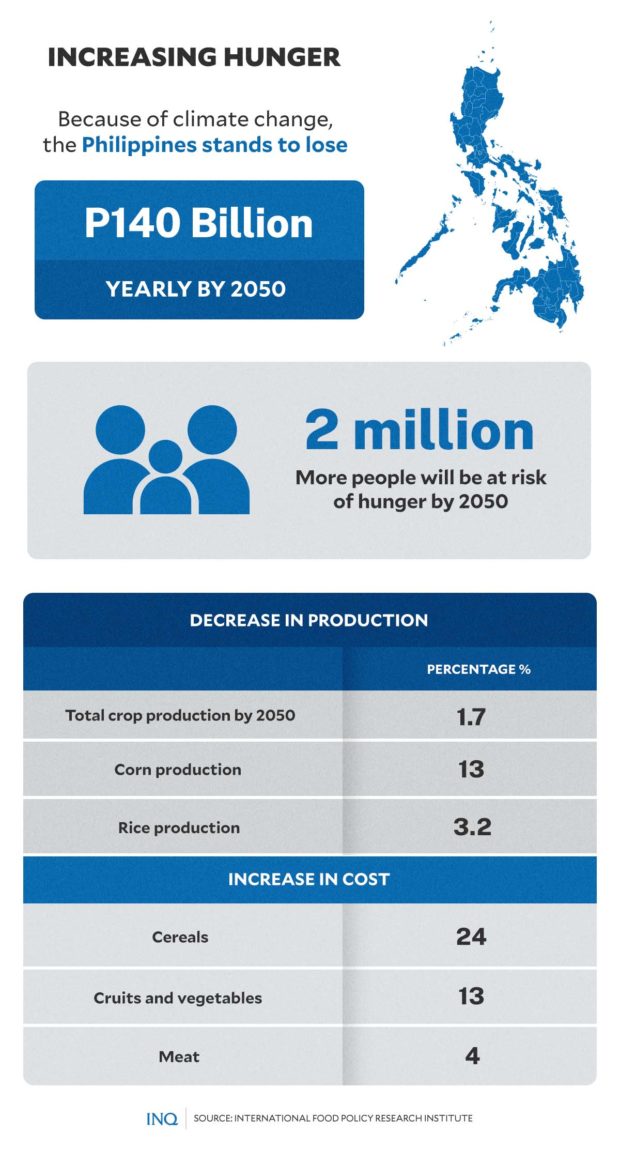 However, in most cases, “likely impacts will be adverse.”

“Agriculture could be severely affected by temperature changes coupled with changes in rain regimes and patterns,” it said.

Pagasa stressed that “in areas/regions where rainfall is projected to decrease, there will be water stress, which in turn, will most likely cascade into more adverse impacts, particularly on forestry, agriculture and livelihood, health, and human settlement.”

Based on a study by the International Food Policy Research Institute, climate change is expected to put 2 million more people at risk of hunger by 2050 and cost about P145 billion yearly.

This, as total crop production is estimated to be 1.7 percent lower than it would without climate change, which is particularly troublesome in light of the Philippines’ growing population.

Corn production, meanwhile, is projected to be 13 percent lower in 2050 than it would be without climate change and rice 3.2 percent lower.

“The Philippines has many options to address climate change, which could significantly reduce its impact. These options are feasible, and that cost is modest. The private sector must play a leading role in the climate action, so it’s important that the right incentives are in place,” he explained.

Last month, addressing the 77th session of the United Nations General Assembly, President Ferdinand Marcos Jr. called on all nations to take their share of responsibility in fighting the effects of climate change.

He said in his statement at the UN high-level debate that the effects of climate change, which he described as the “greatest threat” affecting all countries and people, were “uneven and reflect a historical injustice.”

“Those who are least responsible suffer the most. This injustice must be corrected, and those who need to do more must act now,” he said. “We accept our share of responsibility and will continue to do our part to avert this collective disaster.”

READ: Those who need to do more vs climate change ‘must act now’ – Marcos

However, the group Greenpeace Philippines stressed that Marcos’ words should be reflected in actual policies.

“At present, we hear all this talk about climate justice, climate action, protecting biodiversity, ensuring food security, and upholding justice and human rights, but, in reality, most developments on the ground and the administration’s policy direction are leading us away from these purported aspirations.”

“We are calling on Mr. Marcos Jr. to actualize the claims in his speech, and heed the calls of Filipino communities for concrete action on climate and rights,” it said.

RELATED STORY: 3 things we must do to mitigate impact of climate change in PH