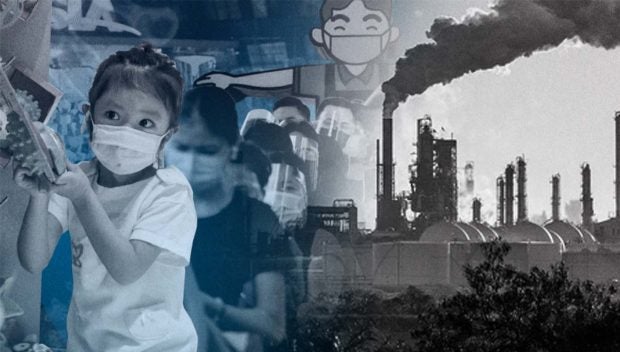 MANILA, Philippines—Global warming and climate change bring alarming harm on top of their obvious environmental consequences, as climatic hazards worsened over 200 infectious diseases and non-transmissible conditions in the past decades.

Various climatic hazards such as warming, heatwaves, droughts, wildfires, extreme precipitation, floods, and sea level rise are consequences of the emission of GHGs.

Aside from this obvious environmental impact, a wide array of diseases are being affected by climatic hazards. This sometimes depends on pathogens—a bacterium, virus, or other microorganisms that can cause diseases—or transmission types (for example, vector-borne, airborne, direct contact, and so on).

“The combination of numerous climatic hazards by the numerous pathogens reveals the potentially large number of interactions in which climatic hazards could aggravate human pathogenic diseases,” Camilo Mora, a data scientist at the University of Hawaiʻi at Mānoa, and his colleagues wrote in their study published on the peer-reviewed Nature Climate Change journal. 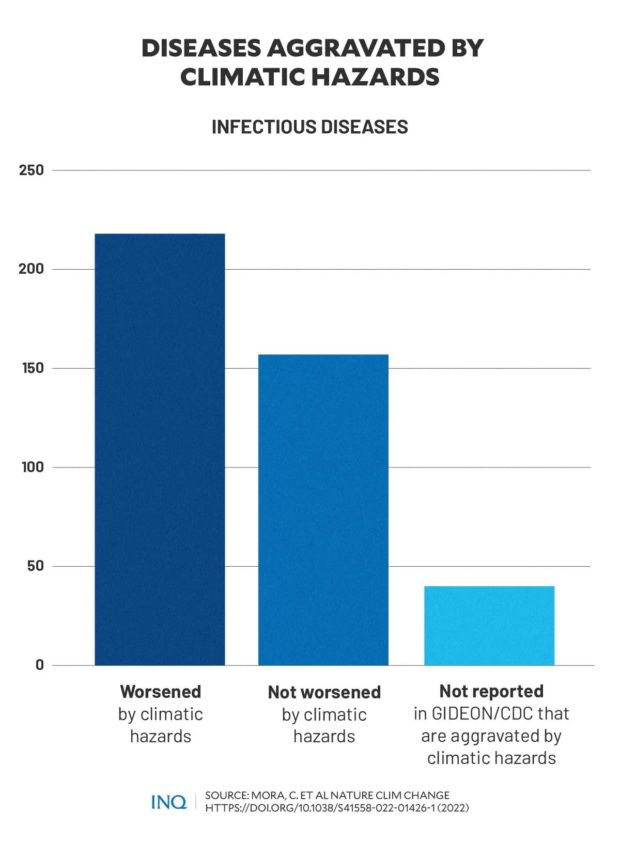 In the study, Mora and his colleagues analyzed over 77,000 research papers, reports, and books for records of infectious diseases connected to climatic hazards that had been made worse by GHGs.

More than 90 percent of these were published after the year 2000, with at least 830 publications containing 3,123 case examples in which climatic hazards have aggravated infectious diseases.

The scientists discovered that the cases were related to 286 unique pathogenic diseases, of which 277 were exacerbated by at least one climatic hazard. At least 63 diseases were diminished, 53 were aggravated by other climatic hazards, and nine were exclusively diminished by climate change. 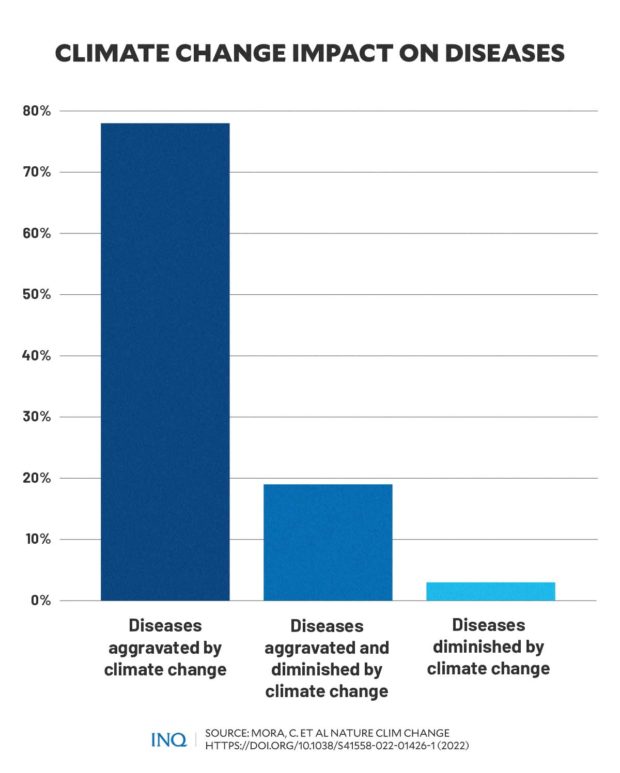 Moreover, out of the authoritative list of 375 infectious diseases documented to have impacted humanity—based on records by the Global Infectious Disease and Epidemiology Network (GIDEON) and the US Center for Disease Control and Prevention (CDC)—58 percent, or 218 infectious diseases, were aggravated by climatic hazards.

At least 157, or 42 percent, on the list, were reportedly not aggravated by climatic hazards. At least 40 diseases not reported on GIDEON and US CDC’s list—including non-transmissible conditions, such as asthma and poisonous snake or insect bites—were worsened by climate change.

The study also found 1,006 unique pathways in which climatic hazards, through different modes of transmission, resulted in cases of pathogenic diseases.

Findings showed that the following climatic hazards have led to cases of infectious diseases:

At least 103 unique pathogenic diseases related to climate change were categorized as vector-borne, 78 as waterborne, 60 as airborne, 56 as direct contact, 50 as food-borne, and 116 under an unspecified mode of transmission. 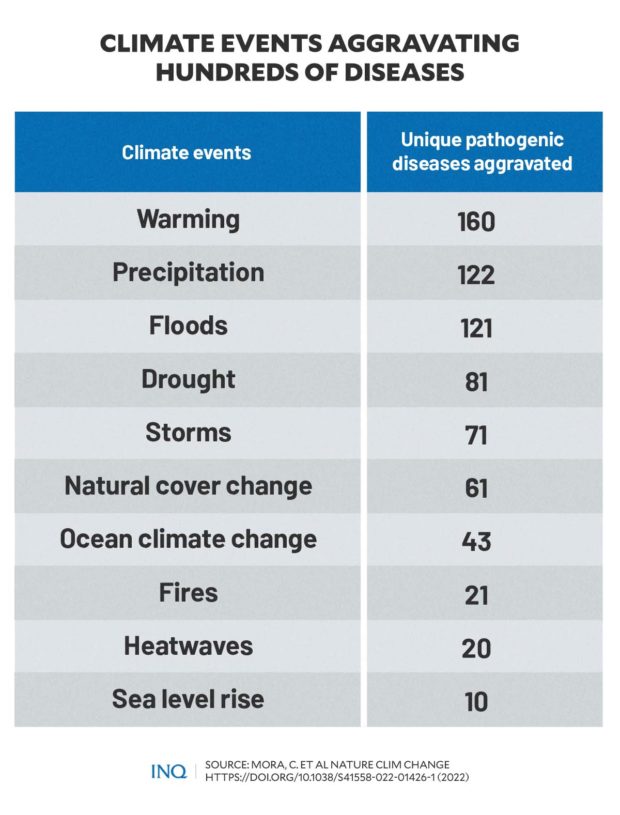 An interactive display of the pathways and the underlying data are available at https://camilo-mora.github.io/Diseases/.

“The sheer number of pathogenic diseases and transmission pathways aggravated by climatic hazards reveals the magnitude of the human health threat posed by climate change and the urgent need for aggressive actions to mitigate GHG emissions,” the scientists stated.

The researchers also examined the various ways in which climate change or climatic hazards bring infectious diseases and people closer together.

For instance, as more people engage in recreational water-related activities due to heatwaves, cases of waterborne diseases such as Vibrio-associated infections, primary amoebic meningoencephalitis, and gastroenteritis increase.

Storms, floods, and the rise of sea levels have caused human displacements implicated in cases of leptospirosis, gastroenteritis, cholera, pneumonia, typhoid, hepatitis, respiratory disease, and skin diseases, among others.

READ: Leptospirosis: A scourge that comes with rains, floods

In some areas, changes in precipitation and temperature paired with compliance with health safety protocols were also found to aggravate the transmissibility of viruses such as influenza and COVID-19.

“[One study] suggested that heavy rainfall could exogenously induce social isolation, helping to explain lower COVID-19 cases after heavy rainfall; however, increased cases of COVID-19 were associated with increases in precipitation in Indonesia, perhaps reflecting different behavioral responses to extreme rain,” Mora and his colleagues wrote. 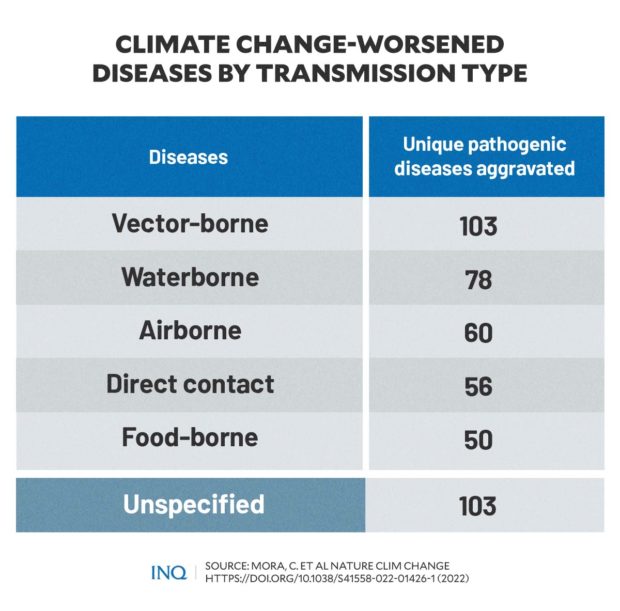 “Higher temperatures have been associated with increased COVID-19 cases in some instances, and although a mechanism was not outlined, it is possible that extreme heat forces people indoors, which can increase the risk of virus transmission, especially when combined with poor or reduced ventilation; in a related mechanism, increased transmission of coronaviruses during cool spells may be related to increased social gatherings, among other factors.”

(Next: Climate change’s impact on people and pathogens)