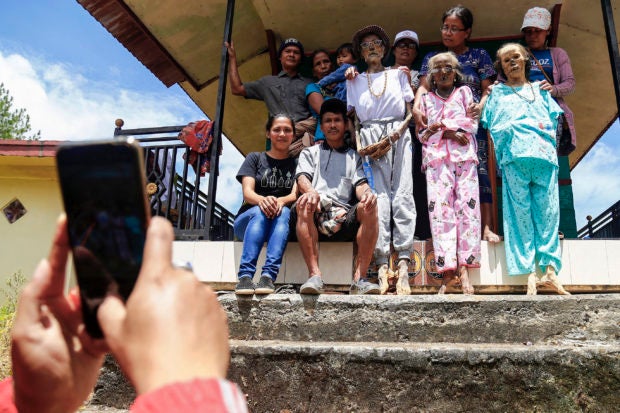 Family members pose for a photo with their deceased loved ones in a traditional rite called “Manene” in Lembang village on Indonesia’s Sulawesi island. (AFP)

TIKALA, Indonesia–A family on an Indonesian island poses for a photo with an elderly relative no longer able to smile, while another clan tries to dress one of their eldest forebears in khakis and a shirt.

But the eldest generation isn’t stuck in a retirement home or harboring a grudge against their younger kin — they are dead.

Hundreds of corpses are pulled out and dressed in the village of Torea as part of the ritual to honor their spirits and provide offerings.

“When we do Manene, we would start by opening the grave chamber and cleaning it and its surrounding area,” one of the family members, Sulle Tosae, told Agence France-Presse.

“Then, we would dry the bodies under the sun before [we] change their clothes,” he said.

Coffins holding the preserved bodies of their loved ones are pulled from a burial cave carved into the mountainside.

“The offerings are a symbol of gratitude from the children and grandchildren to the departed ones,” Torea village head Rahman Badus told AFP.

They honor their spirits “so they can always bless the living with safety, peace and happiness,” he said.

One family offered their freshly exhumed relative a cigarette, while another affixed a pair of stylish sunglasses.

A few of the bodies remain relatively intact from the mummification process while others have deteriorated to skeleton remains. 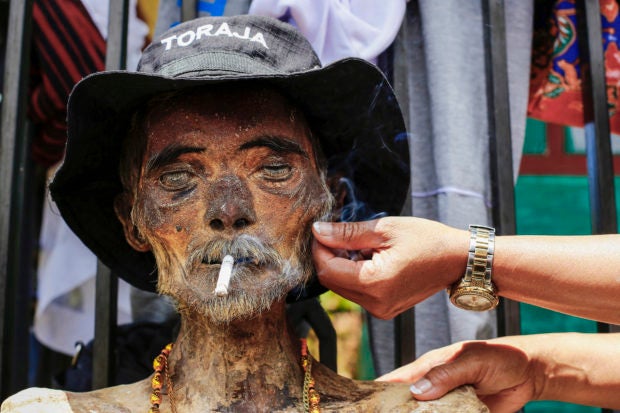 Spirits of the dead

Torajans are an ethnic group that numbers about a million people on Sulawesi island.

They have few qualms when it comes to talking with an embalmed corpse, dressing them up, brushing their hair or even taking pictures with a mummified relative.

Depending on the village, the Manene is usually held every few years in July or August.

The Torajans believe spirits of the dead will linger in the world before their funeral ceremonies and will begin their journey to the land of spirits after their souls are immortalized.

The families will preserve the body until they have saved enough money for an elaborate funeral.

The deceased were previously mummified through an embalming process using natural remedies such as sour vinegar and tea leaves.

But many families now take the shortcut of injecting a formaldehyde solution into the corpse.

The disinterring is a shocking and gruesome scene for onlooking Western tourists, yet residents are more than happy to clean out the bodies, take pictures and pray for their souls.

But the village chief says some locals have gone too far.

“The bodies must be treated with the utmost respect in the Manene ritual,” Badus said.

“Relatives are paying respect to their parents or ancestors and disrespect has consequences.” 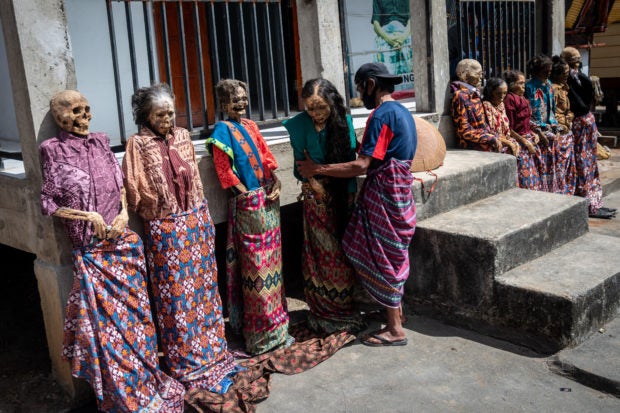 A family member dress up the preserved corpses of relatives during a traditional ritual called “Manene” in Panggala, North Toraja.(AFP)