Leptospirosis: A scourge that comes with rains, floods | Inquirer News

Leptospirosis: A scourge that comes with rains, floods 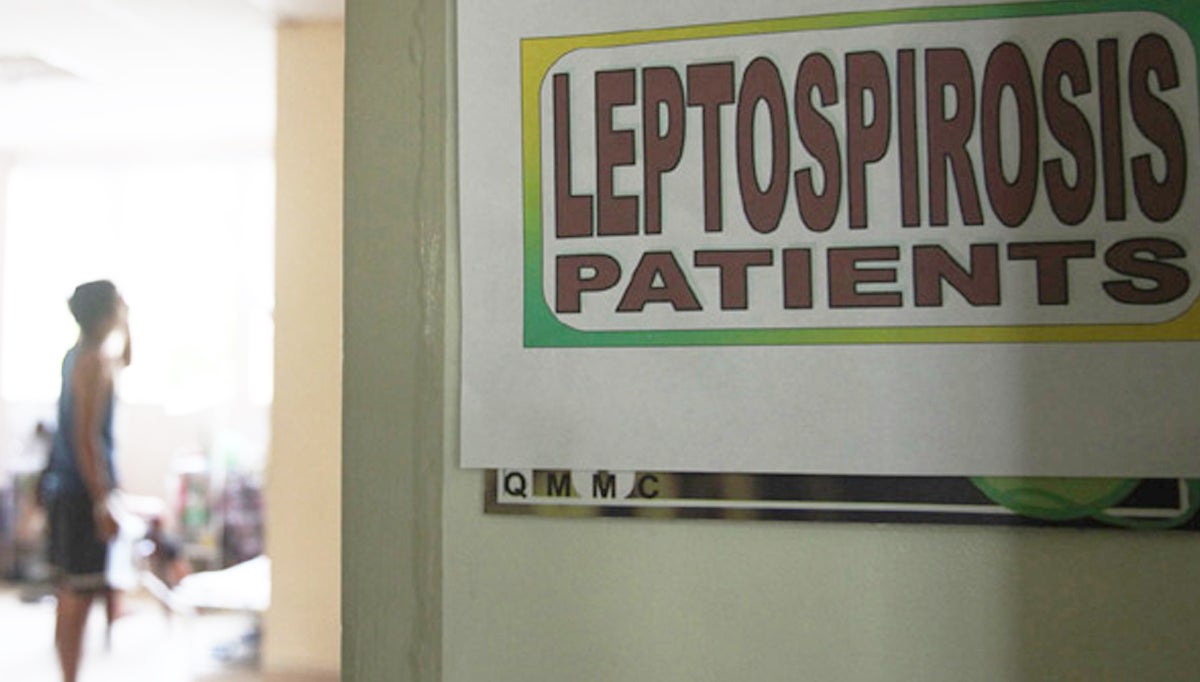 Sign in a hospital for patients with leptospirosis. FILE PHOTO

MANILA, Philippines—The rainy days are back. So is the risk of getting leptospirosis—a bacterial, water-borne disease that can lead to kidney damage, meningitis, liver failure, respiratory distress, and even death when not treated properly.

The recent torrential rains brought by the southwest monsoon, or habagat, have caused flooding in several parts of the country.

As many Filipinos wade through floods, the country’s health department advised the public to take extra precautions to prevent getting the potentially deadly disease.

How do people get leptospirosis?

According to the World Health Organization (WHO), leptospirosis is caused by a bacterium called Leptospira.

Different wild and domestic animals such as rodents, pigs, dogs, horses, cattle, and other wild animals may carry the bacterium.

“Infected animals may continue to excrete the bacteria into the environment continuously or every once in a while for a few months up to several years,” the US Center for Disease Control and Prevention (CDC) said.

Unlike humans, these animals may have no symptoms of the disease despite being infected.

People may become infected through:

The CDC explained that the bacteria can enter the body through the skin, especially if there’s a break in the skin caused by a cut or scratch.

It can also enter through the mucous membranes or the eyes, nose, or mouth. Drinking contaminated water may also lead to infection.

One of the most common causes of leptospirosis is exposure to contaminated waters such as floodwaters. 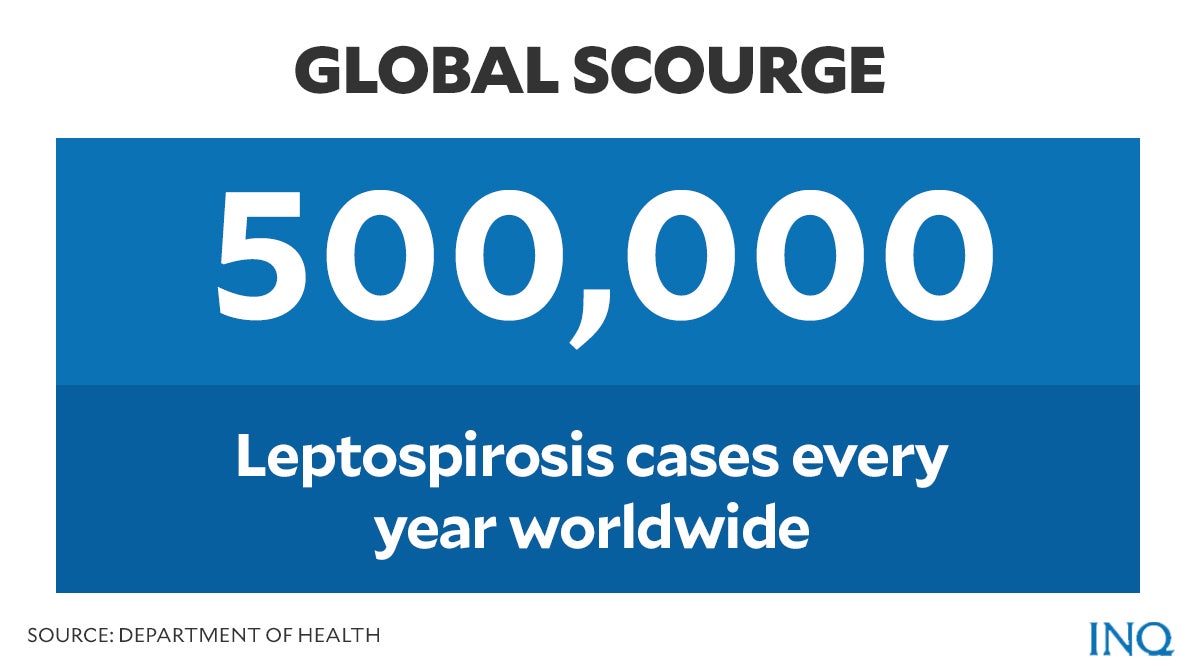 Data by the WHO showed that there are over 500,000 cases of leptospirosis each year around the globe, but are mostly reported in countries with humid subtropical and tropical climates.

“The number of human cases is not known precisely due to under- or misdiagnosis,” said WHO.

Outbreaks of the disease are usually linked to floods and hurricanes.

“Leptospirosis is a disease of epidemic potential, especially after heavy rainfall or flooding,”  WHO added. 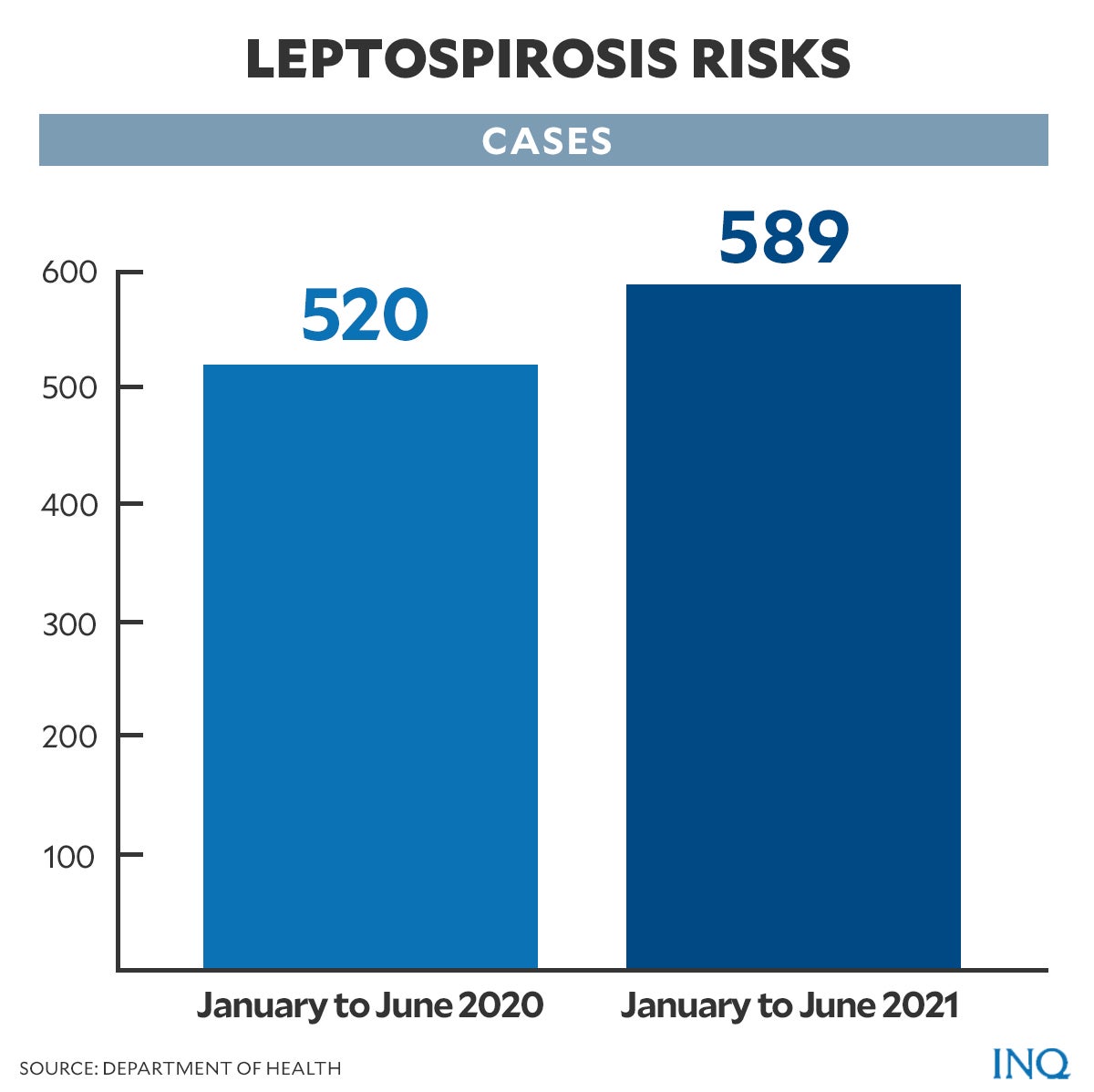 Last month, the Department of Health (DOH) said it recorded 589 cases of leptospirosis from January to June 19 this year.

READ: DOH: Leptospirosis cases increase by 13% in first half of 2021

The numbers were an increase of 13 percent compared to 520 logged in the same period in 2020.

According to the DOH’s monthly surveillance report for leptospirosis, there were a total of 650 cases from January to June 2019. For the same period in 2018, there were 1,555 reported cases of the disease.

What are the signs and symptoms?

The DOH cited some signs and symptoms of leptospirosis such as:

The CDC added red eyes, abdominal pain, diarrhea, and rash as some of the wide range of leptospirosis symptoms.

For severe cases, the DOH said infected individuals may experience the following:

However, the CDC noted that some infected persons may exhibit no symptoms at all.

WHO also emphasized that some of the symptoms it listed, including those cited by the DOH, can be mistaken for other diseases such as influenza, dengue, and other viral hemorrhagic diseases.

“[M]aking the correct diagnosis (clinical and laboratory) at the onset of symptoms is important to prevent severe cases and save lives, primarily in outbreak situations,” said WHO.

According to DOH, the time between a person’s exposure to a contaminated source and becoming sick is seven to 10 days.

Who are at risk?

Both WHO and CDC said that the disease can be an “occupational hazard” for people who work outdoors and have contact with animals.

Some of the persons who have a higher risk of exposure based on their occupation include:

The disease can also be a “recreational hazard” especially to those who often go rafting, kayaking, swimming, and wading in contaminated lakes and rivers.

The CDC also flagged the increasing incidence of leptospirosis among urban children.

Leptospirosis, according to DOH, may be treated by taking antibiotics prescribed by a doctor.

“Early recognition and treatment within two days of illness to prevent complications of leptospirosis, so early consultation is advised,” DOH said.

Dr. Rafael Castillo, of the Manila Doctors Hospital, who also writes a weekly column on Inquirer Lifestyle’s Wellness page, cited in an article published last year some medical advice he received from Dr. Dolores Banzon, of Philippine Society of Nephrology.

“If you waded in floodwaters just once (single exposure), and you don’t have cuts or skin lesions, you’re considered low risk. You just need to take a single dose of doxycycline 100 milligrams, two capsules single dose within 24 to 72 hours,” Castillo wrote, citing an advisory sent by Banzon.

“If you have some cuts or lesions in your skin, you’re considered moderate risk. Take doxycycline 100 mg, two capsules for 3-5 days. Start ASAP and no later than 72 hours after,” he continued.

“If you have continuous exposure, with or without skin cuts or lesions, you’re at high risk for infection. Take prophylactic doxycycline 200 mg once a week until you stop wading in the flood,” the doctor added.

Meanwhile, the DOH gave the public some tips on how to prevent leptospirosis: