DOH: Leptospirosis cases increase by 13% in first half of 2021 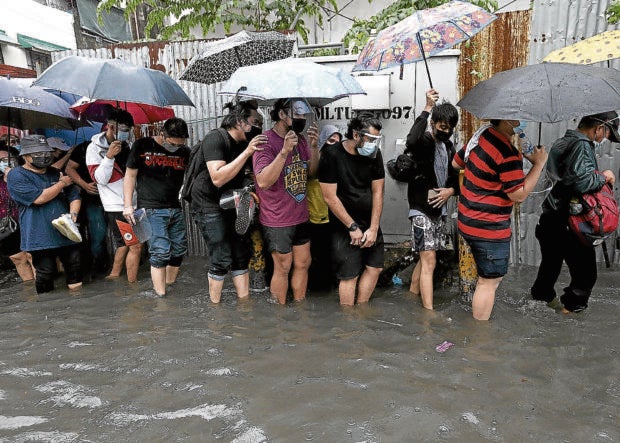 ADDED RISK Residents and workers stand in the rain and wade through floodwaters on
Wednesday—risking infection from waterborne diseases—just to get into San Andres Sports
Complex in Manila, one of the COVID-19 vaccination hubs in the city. —RICHARD A. REYES

MANILA, Philippines — The number of leptospirosis cases increased by 13 percent for the first half of 2021, the Department of Health (DOH) reported Friday as it warned the public against the disease especially during the rainy season.

According to Health Undersecretary Maria Rosario Vergeire, the country logged 589 cases of leptospirosis from January to June 19 this year.

“This is 13 percent higher compared to the 520 reported leptospirosis cases of the same time period of 2020,” she told an online media briefing.

Meanwhile, the case fatality rate (CFR), or the percentage of people who died among the reported cases, was 11.4 percent so far for 2021, 1.6 percent higher than the 9.8 percent for the same period in 2020.

The highest incidence rate was recorded in the Cordillera Administrative Region with 1.49, Western Visayas at 1.34, and Cagayan Valley with 1.33 per 100,000 population.

(We are appealing to the public to take extra care when walking in flooded areas. If this cannot be avoided, you should wear rubber boots, and wash your feet with soap and water. We should also clean our surroundings.)