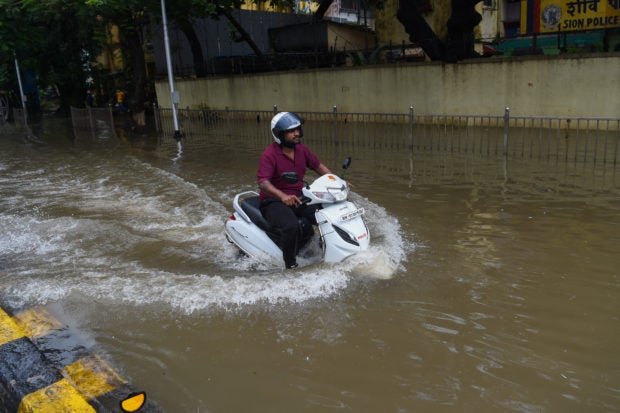 A biker rides along a waterlogged road after a heavy monsoon rainfall in Mumbai on July 16, 2021. (Photo by Punit PARANJPE / AFP)

Mumbai, India — The Indian Navy and Air Force joined rescue efforts in the western state of Maharashtra on Friday after heavy monsoon rains left thousands stranded in floods and landslides that have killed at least three people.

Water levels rose to 3.5 metres (12 feet) in areas of Chiplun, a city 250 kilometres (160 miles) from Mumbai, following 24 hours of uninterrupted rain that caused the Vashishti river to overflow, submerging roads and homes.

“At least three people have died so far, but rescue operations are still underway,” a Maharashtra state government spokesperson confirmed to AFP.

Rescue efforts have been slowed by landslides in the neighbouring district of Raigad that have blocked crucial roads including the Mumbai-Goa Highway.

The Indian Navy deployed seven rescue teams equipped with rubber boats, life jackets and lifebuoys to the affected areas, along with a helicopter to airlift marooned residents.

India’s meteorological department has issued red alerts for several regions in the state, indicating that heavy rainfall will continue for the next few days.