PH most disaster-prone country in the world—study | Inquirer News

PH most disaster-prone country in the world—study 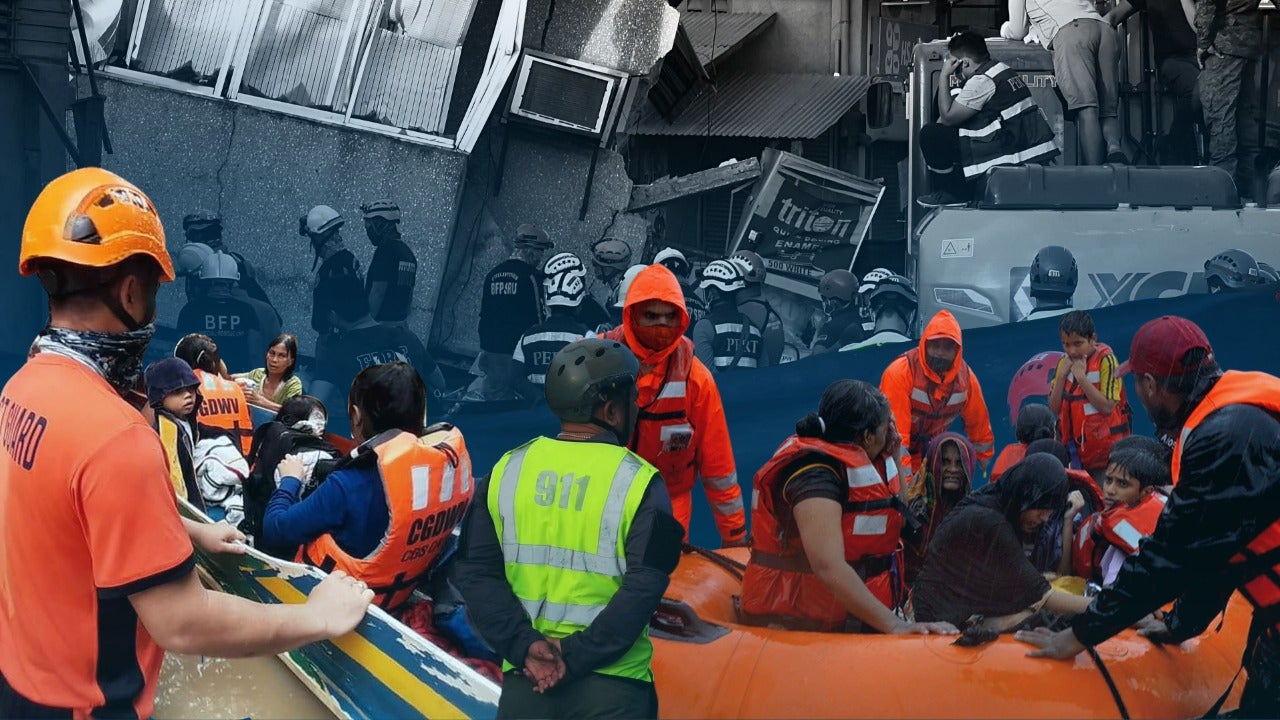 MANILA, Philippines—The Philippines, where Super Typhoon Karding (Noru) recently hit, was identified as the most disaster-prone country in the world due to its high risk, exposure, and vulnerability to disasters and calamities, an international report showed.

The World Risk Report 2022 by Germany-based Bündnis Entwicklung Hilft and the Institute for International Law of Peace and Armed Conflict at Ruhr University Bochum (IFHV) showed that the global hot spots of disaster risk from natural hazards are in the Americas and Asia.

The World Risk Index, a part of the annual risk report which calculates the disaster risk for 193 counties, showed that the Philippines has the highest disaster risk, with an index score of 46.82.

India trailed behind with an index score of 42.31, Indonesia with 41.46, Colombia with 38.37, and Mexico in fifth place with 37.55. Myanmar, Mozambique, China, Bangladesh, and Pakistan were also among the top 10 countries with the highest disaster risk.

“The risk assessment in the WorldRiskReport is based on the general notion that the emergence of a disaster not only depends on how severely natural hazards hit a society but also on how vulnerable society is to their effects,” the report read.

The report noted that the World Risk Index focuses “on the risk of disasters as a result of extreme events and adverse impacts of climate change.”

“The WorldRiskIndex is a model that aims to raise awareness about the relevance of social capacities in disaster preparedness among the public and decision-makers in all sectors of society, to provide guidance for practitioners in the prevention of humanitarian crises, and to support decisions in the allocation and prioritization of resources,” it continued.

“The aim is to create an understanding that the emergence and progression of disasters are highly dependent on the social conditions of the people, regions, and countries affected, to accompany the shift from reactive to proactive action,” it added.

The Philippines’ current ranking in the World Risk Index was a huge jump from its previous records.

At least four years ago, in 2018, the country ranked third on the list of countries with the highest disaster risk, with an index score of 26.70. In 2019, the country dropped to ninth after registering an index value of 20.69. 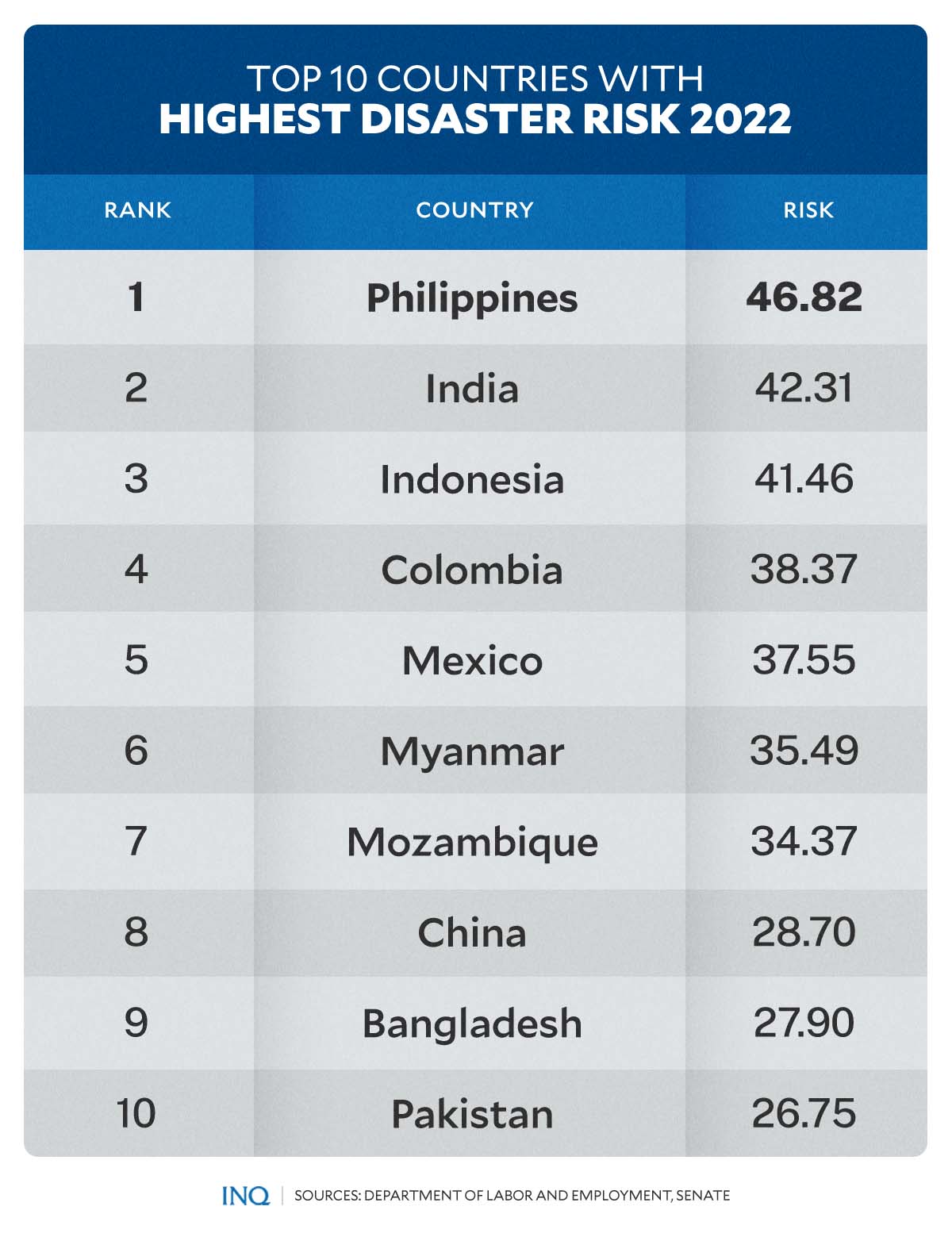 In 2020, as the COVID-19 pandemic hit countries across the globe, the Philippines was still among the top 10 countries with the highest disaster risk while remaining in ninth place with the same index score.

Last year, the Philippines ranked eighth with an index score of 21.39.

However, this year’s report emphasized that the World Risk Index has been updated, which now follows 100 indicators compared to the previous 27.

“The WorldRiskIndex now comprises a “total of 100 indicators instead of the previous 27,” said IFHV Research Associate Daniel Weller.

“In particular, the inclusion of indicators on how populations have been affected by disasters and conflicts in the past five years, as well as on refugees, displaced persons, and asylum seekers in the new index—also against the backdrop of the major global migration movements—results in a significantly more accurate representation of the realities of life in many countries,” Weller said.

“This expressed the conviction that every society is capable of taking direct or indirect precautions, such as the establishment and maintenance of effective disaster protection to counter the effects of natural hazards or climate change.”

Still, the World Risk Index continues to offer crucial estimates of the latent risk of nations suffering a calamity brought on by catastrophic natural occurrences and allows for cross-national comparisons of these risks.

The World Risk Report maintained that no forecasts are provided regarding the impending disaster’s date, severity, or likelihood.

The report also found that the Philippines was among the top 10 countries with the highest exposure to disasters. The country ranked fourth with 39.99 exposure, trailing China, Japan, and Mexico.

“Exposure is the extent to which populations in hazard-prone areas are exposed to and burdened by the impacts of extreme natural events or the negative consequences of climate change,” the report said.

“Thus, exposure consists of the aspects of hazardousness, which include the frequency and intensity of earthquakes, tsunamis, coastal and river floods, cyclones, droughts, and sea-level rise in an area (hazard zone), and populations (hazard object),” it added. 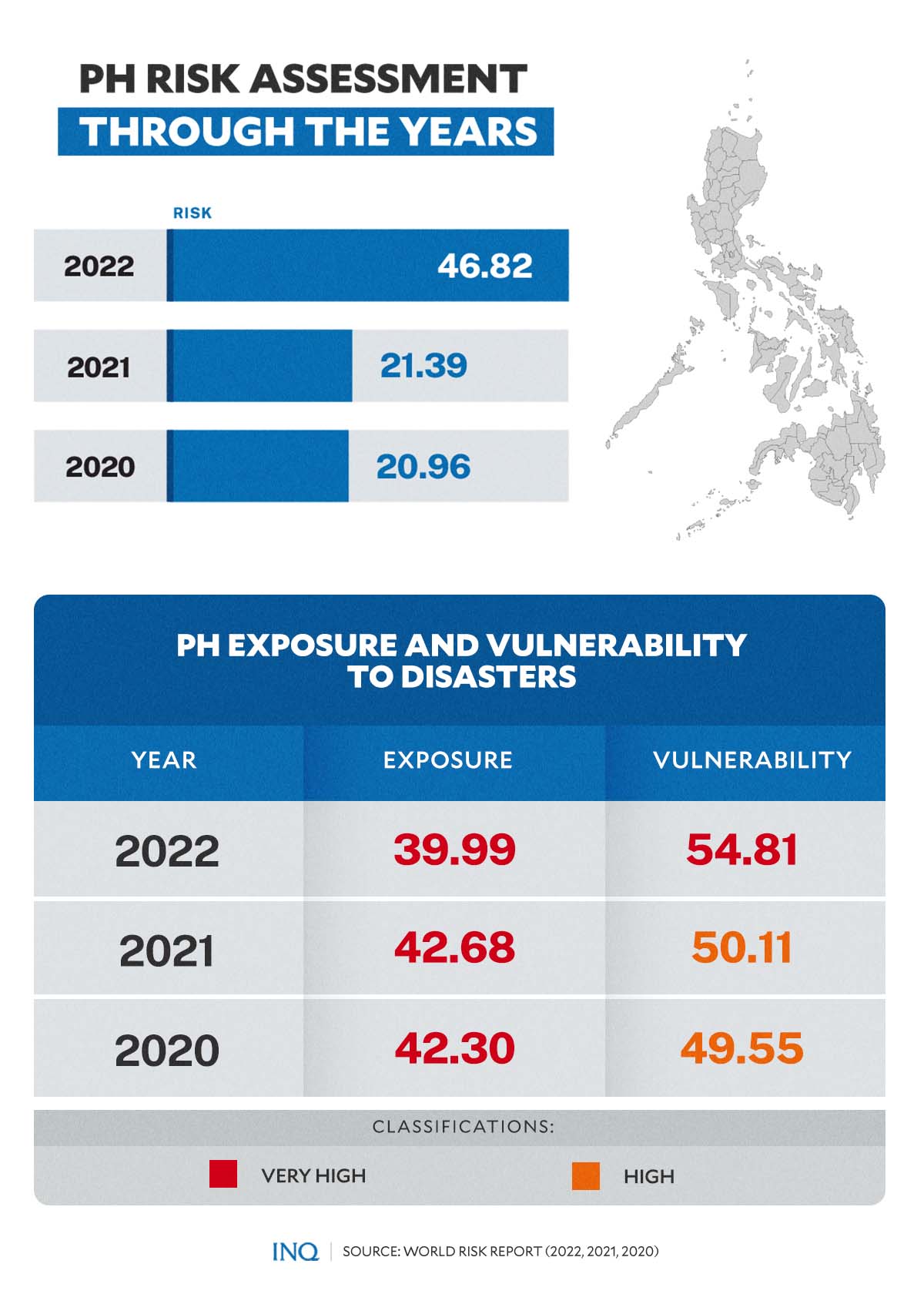 The country, however, was not included in the top 10 most vulnerable countries to disasters.

Vulnerability focuses on the tendency of populations to be vulnerable to damage from extreme natural events or the negative impacts of climate change.

“As a sphere of economic, political, social, and environmental factors, vulnerability maps the capacities and dispositions of people, households, and societies and indicates how easily and to what degree they can be destabilized, damaged, or even destroyed by extreme events,” the report explained.

“It is composed of the three dimensions of susceptibility, lack of coping capacities, and lack of adaptive capacities, which are subdivided into further categories.”

Still, the country’s vulnerability score was “very high,” at 54.81.

In terms of the country’s susceptibility—or the overall likelihood of populations suffering damage from extreme natural events and entering a state of disaster—the Philippines scored 51.35, categorized as “very high.”

“Coping capacities [refer] to the abilities and measures of societies to counter adverse impacts of natural events or climate change through direct actions and available resources in the form of formally or informally organized activities and measures, as well as to reduce damage in the immediate aftermath of an event and initiate recovery,” the report stated.

“Adaptive capacities, in contrast to coping capacities, refers to long-term processes and strategies to achieve anticipatory changes in societal structures and systems to counteract, mitigate, or purposefully avoid future negative impacts,” it added.

This year’s World Risk Report focused on digitalization and how it has created new opportunities in all phases of disaster management.

The report highlighted how information and communication technologies (ICTs) used by people provide important data for risk analysis, make essential information available in the event of an emergency, and accelerate the start of relief measures.

ICTs, according to the report, also offer tools to fight against issues including hunger, poverty, and social inequality, “as well as for improved healthcare and educational opportunities, and consequently also for sustainable development and reduced vulnerability.”

“Digitalization has significantly changed disaster preparedness and management. Information and communication technologies (ICT) are used in all phases of disaster management for knowledge acquisition, information dissemination, communication, as well as control,” the report said.

“Examples include the use of global databases for risk analysis, digital early warning systems, apps for recording damage, and communication with those affected via social media platforms,” it added.

However, Wolf-Christian Ramm—chairman of the Board of Bündnis Entwicklung Hilft—and Pierre Thielbörger—executive director IFHV, Ruhr University Bochum—noted that digitalization is also accompanied by many issues to which solutions are yet to be found.

“With the rapid digitalization of disaster management, new weak spots and vulnerabilities are inevitably emerging,” they said.

“To counter these new vulnerabilities and to maintain the integrity of disaster relief, proactive leadership, digital security training, technical legal knowledge, and cybersecurity investments are essential. Issues around data privacy, accountability, and ethics are particularly significant at the moment.”

To make better use of the potential of digitalization for disaster management—as well as to make it more sustainable, local, and socially just—the report suggested the following requirements:

Bongbong Marcos to push for passage of bill creating Dep’t. of Disaster Resilience