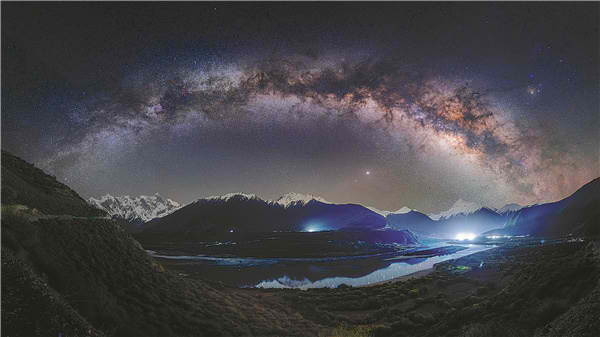 The Milky Way arches across the night sky above the Yarlung Zangbo Grand Canyon in the Tibet autonomous region. [Photo provided to China Daily/Asia News Network]

BEIJING — A research team made up of Chinese and foreign scientists has accurately measured the mass of the Milky Way revealing it to be about 550 billion times the mass of the Sun.

The results were published recently in the journal Monthly Notices of the Royal Astronomical Society.

The newly measured mass of the Milky Way is nearly half the average value measured by other research teams, which was about 1 trillion times the mass of the Sun.

“Our latest results suggest that the Milky Way may be ‘slimmer’ than we previously thought,” said Xue Xiangxiang, a main member of the research team and a researcher from the National Astronomical Observatory of the Chinese Academy of Sciences (NAOC).

“This means that there is much less non-luminous but gravitational dark matter in the Galaxy than originally estimated,” she added.

According to Xue, the mass is crucial to understanding the dynamics of the Galaxy. However, there has been a high uncertainty in its estimation due to the limitations of observations.

In this research, the scientists obtained the results based on data from the Large Sky Area Multi-Object Fiber Spectroscopic Telescope (LAMOST), a leading optical telescope in China, and the European Space Agency’s Gaia satellite.

The large sample of spectroscopic data provided by LAMOST is one of the main advantages of this research compared to the studies of other research teams, said Xue.

“Not only large in number and coverage, the sample also records the three-dimensional (3D) position, 3D velocity, and metal abundance of each star,” she added.